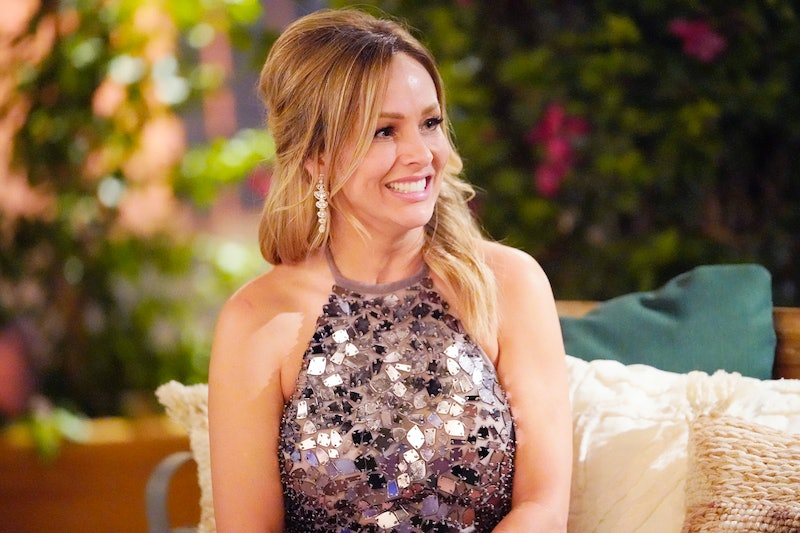 Whether or not Clare Crawley finds a husband during her time as the Bachelorette, she's already got plenty of love at home — courtesy of her pups. Clare's two dogs Honey and Elbie are a huge part of her life, so much so that they came with her to film The Bachelorette, as she revealed on Instagram.

"Perks of filming in one location! These two babies never left my side through all of the days in isolation when I was alone prior to filming. They give me happiness, peace, and unconditional love," she wrote in a caption. "What a gift it was when @chrisharrison and the producers from the @bacheloretteABC called letting me know that because we were glued to each other during quarantine, they were not going to let them leave my side during filming. It was the greatest gift ever."

A clip Clare posted to Instagram showed that her golden retriever Honey even got to meet her suitors, one of whom took advantage of Clare's love for dogs in his limo exit stunt: Kenny wore a shirt with Honey and Elbie's faces on it. "Do you mind if I pet my dogs?" Clare asked, rubbing his abs.

While we've seen Bachelor Nation dogs on dates before, like Rachel Lindsay's pup Copper and Ben Flajnik's dog Scotch, never has a dog (or two!) stayed on the show for the whole filming period. Perhaps this means they'll get even more screen time than just on night one.

While on the premises of The Bachelorette bubble (La Quinta Resort & Club in Palm Springs, California), Elbie and Honey lived the life of luxury. Clare gave a tour of her suite on The Bachelor: The Greatest Seasons — Ever!, and her dogs had their own room complete with dog beds, bowls, and their own flower arrangement. "[They're being] spoiled rotten; I don't want them to get used to it," Clare joked.

She may not spoil them at home with their own bedroom and flowers, but the pups are by her side just as much in her regular life. She's had Elbie the longest, and he accompanies her everywhere — even to Home Depot in a glittery bow tie.

Clare calls Elbie a "velcro puppy," because he's always with her. As for Honey, she's a more recent addition to the family, first showing up in a summer 2019 photo. (It was sponcon for a mattress, because Clare really does include her dogs in everything she does — including advertising!)

If Clare did leave the show engaged, rest assured that the dogs like him too. Clare would never bring a guy home who didn't get along with her fur babies. And dogs are a great judge of character, so pay attention to which of the suitors they latch onto.

More like this
A Guide To All Of Zach Shallcross' 'Bachelor' Filming Locations
By Brad Witter
'Bachelorette' Vet Clare Crawley Unveiled 2 Special Wedding Day Accessories
By Stephanie Topacio Long
Kaitlyn Bristowe Said Chris Harrison Ignored Her After Her 'Bachelorette' Hosting Gig
By Grace Wehniainen
This 'Bachelor' Contestant Got Back With Her Bachelor Nation Boyfriend After Going Home
By Grace Wehniainen
Get Even More From Bustle — Sign Up For The Newsletter
From hair trends to relationship advice, our daily newsletter has everything you need to sound like a person who’s on TikTok, even if you aren’t.