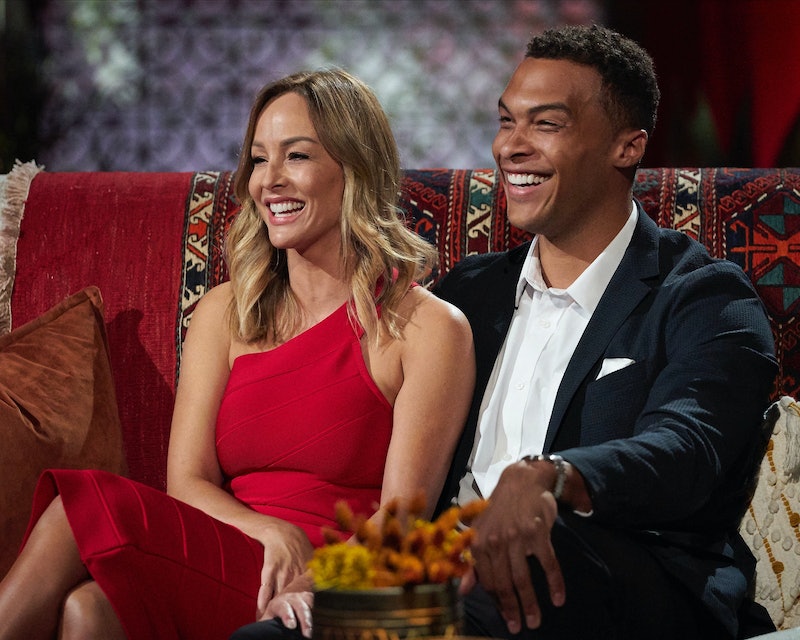 Have Clare Crawley and Dale Moss followed up their whirlwind engagement with a secret wedding ceremony? Not exactly. After Clare referred to Dale as her "husband" on her Instagram story on Dec. 10, the former Bachelorette explained that it was just an accident, and that she and her fiancé had not secretly tied the knot. Clare inadvertently sparked the marriage rumors when she posted a video from a shopping trip with the former football player on Thursday.

"Nothing makes me happier than grocery shopping with my husband," a masked Clare told her followers at the time. However, after Bachelorette fans began asking her if she and Dale had secretly gotten married, Clare posted a follow-up story addressing her comments. "[It was a] slip of the tongue!" she wrote, alongside a video of her shaking her head. "We're not married."

This actually isn't the first time that the hairstylist has gotten ahead of herself; Clare also infamously called Dale her "fiancé" on The Bachelorette before they were engaged, confirming that he had already won her heart. Oops.

Despite getting engaged on the show after just two weeks of filming, Clare and Dale have made it clear that they're in no rush to tie the knot. "You know how it kind of is with guys," Clare said during a November appearance on the Bachelor Happy Hour podcast. "He’s not scared of anything ... [But] we don’t have anything crazy planned right now. Genuinely, he knows what I want to do. I just want to go to Target together."

While they might not be ready to get married just yet, that hasn't stopped the couple from celebrating some other relationship milestones along the way. “It’s not uncomfortable for us to be looking at houses," Dale said on Bachelor Happy Hour, confirming that the pair had already begin house-hunting.

Clare reiterated those statements during a Nov. 11 interview with People. "Dale could have not proposed [on the show] and I would still be with him and love him as much as I do now," she said, explaining that the pair are just happy to be together and in love. "We could go to the courthouse tomorrow and get married or it could be next week or next year. There's no rush. But we definitely talk about it all the time."

And they've also started talking about starting a family together, which Clare implied may happen a little sooner than fans think. "What I love about Dale is nothing scares him with talking about the future. I talk about babies all the time," she told BHH hosts Becca Kufrin and Rachel Lindsay. "He's like, 'Yeah, that's what I want.' It doesn't scare him. I'll remind him of things all the time. 'Not getting any younger!' I'll say things like that and he's like, 'You think I don't know this? Yeah, let's do this.'"

But no matter what comes next — be it a house, a wedding, or even babies — right now, they're just focused on enjoying their time together as a couple. "As long as we're together that's the only thing that matters," Dale said. "This is the best time. We just get to be ourselves and really share that... We're in this to build a future and build a life. That's what we're doing."

More like this
Is Nathan Fielder Dating Anyone? What 'The Rehearsal' Star Has Said About His Relationships
By Grace Wehniainen
Tarek & Heather Rae El Moussa Reveal The Sex Of Their First Baby With Instagram Reel
By Radhika Menon
Kim Kardashian & Pete Davidson’s Relationship Timeline From Start To Finish
By Jordyn Tilchen and Bustle Editors
Khloé Kardashian & Tristan Thompson Welcome Their Second Baby Via Surrogate
By Grace Wehniainen
Get Even More From Bustle — Sign Up For The Newsletter