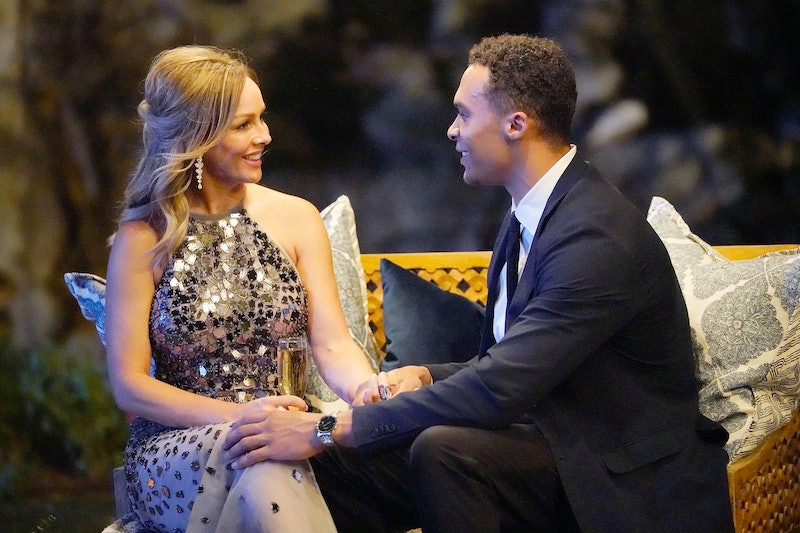 After months of rumors that Clare quit The Bachelorette a few weeks into filming because she fell in love with one of her contestants, Clare gave her first impression rose to exactly the man she's rumored to leave with during Tuesday night's premiere. "I've talked to so many men, and you're the one I still want to keep talking to," Clare told Dale Moss before asking him to accept the rose. "And I feel like as much as we talked, I want more of that."

Clare and Dale's connection was evident from the moment he stepped out of the limo, when he (quite literally) swept her off her feet into a big hug. "Oh, man. I definitely feel like I just met my husband," she said after Dale walked into the resort, which host Chris Harrison said was a Bachelorette first. "Every other guy I felt confident with, but with Dale, everything else went dark around me. I don't even know what I just said. ... I felt everything that I haven't felt, ever. I just know. I'm 39, you know these things! I know when I know that feeling." She later told cameras that when Dale stepped out of the limo, "it just took my breath away."

Based on Clare and Dale's conversation at the first cocktail party, it seems like it was a mutual feeling. "When you were announced as Bachelorette, I was actually watching on TV, and you walked out onstage and just had this beautiful energy and a real confidence," Dale told her. "You were excited. Like, you knew you were exactly where you were meant to be, and that's something I felt." Later, after Clare gave Dale the first impression rose, he told the cameras that "even though it was in one night, we connected on so many levels. I would love to sit and talk with her for so many hours."

According to rumors, Clare's feelings for Dale were so strong that she decided to end her season early. On Aug. 3, multiple outlets reported that Tayshia Adams replaced Clare as the Bachelorette just a few weeks into filming. Per Deadline, the season will chronicle Clare and Dale's love story as well as Tayshia being brought on halfway through filming as the new Bachelorette, which the teaser at the end of the premiere seemed to confirm.

"I have feelings for Dale, we have a connection," Clare says in the teaser as shots of the couple kissing and smiling at one another flash across the screen. "Guess what? It's because I like him. It's happening." After Dale tells Clare on a date that he hasn't "felt these emotions in years," Clare tells him that, "Every time I wake up, I think about you. And when I go to bed at night, I think about you. I know what I want, and guess what? I found it."

Welcome to what may legitimaitely be the most dramatic Bachelorette season yet.