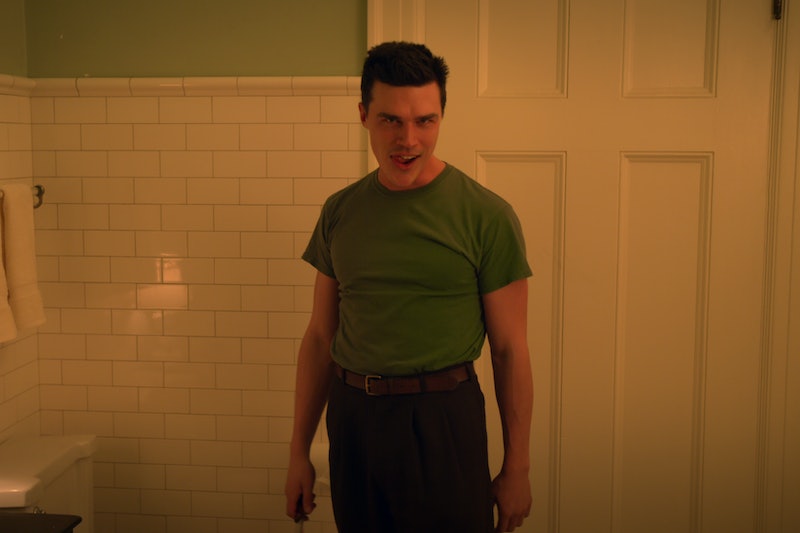 Spoilers ahead for Ratched Season 1. If you watched even five minutes of Netflix's Ratched, you'll be very happy to know that the Clergy Killer (aka Edmund Tolleson) is not a real person. In the first scene of the show, he slaughters an entire house of priests. We later learn the reason: Edmund, the adoptive brother of Nurse Mildred Ratched (Sarah Paulson), had a traumatizing childhood that shaped his skewed sense of morality. To him, murder is just a means to an end.

As children, Mildred and Edmund were placed in a series of abusive foster homes. The last one was the worst, and eventually, Edmund killed both of his foster parents so that he and Mildred could escape. His murder spree years later was also born of hurt and revenge. His biological mother was sexually assaulted by a priest, driving her into a life as a sex worker that ended in her death (and made Edmund an orphan). He targeted the priest who assaulted his mother; the other three he killed were just casualties.

Unlike Mildred, Edmund wasn't in One Flew Over the Cuckoo's Nest, for which Ratched serves as a prequel story. There also isn't some infamous Clergy Killer, but there have been instances of mysterious priest killings over the years. According to Inside Hook, at least four priests were found dead or disappeared in strange ways in the '80s. Some believe the cases to be connected, but no definitive links have ever been found.

That doesn't seem to be what inspired the character of Edmund, though. The show is more interested in exploring the way childhood trauma can bleed into adulthood. "I always thought of him as someone, who, all of his life, had to be a different person and change his personality based on what he needed from the person in front of him," Ratched star Finn Wittrock, who plays Edmund, told the blog Rue Morgue of his character. "He's kind of a chameleon, because he doesn’t really have a core personality. He’s always had to be someone different in every awful situation he’s been in since he was a baby."

In prepping to take on the role, Wittrock said that he watched Silence of the Lambs and Psycho. He also spent time walking around Los Angeles to get a sense of the kinds of people who are ignored and beaten down by society, much like Edmund.

"I really approached him as someone … who had never really grown up in any kind of nurturing environment and was so traumatized by the violence inflicted upon him throughout his childhood that he was still kind of always coming from that place of a battered kid," Wittrock said during a press conference earlier this month. "He does have his own moral compass; it’s just kind of a warped one. There is a level of innocence that he really believes in, that he would never harm [someone maliciously]."