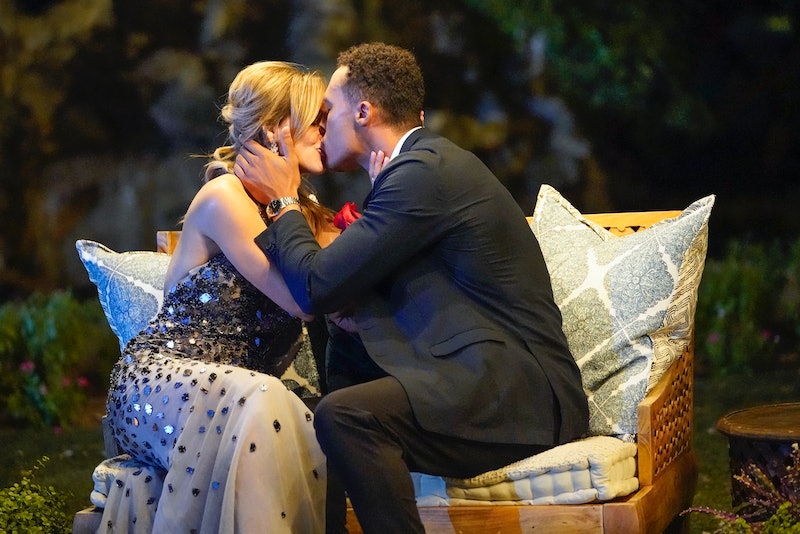 After months of agonizing speculation, The Bachelorette finally confirmed Clare quits the show in a teaser that aired at the end of Tuesday night's premiere. But it didn't show the circumstances she leaves under — only the chaotic aftermath of the men reacting to the news that she's gone. Based on Clare's first impression of contestant Dale Moss, it seems very likely that the rumors are true and she leaves the show to be with him. But just to be sure, we asked body language expert Blanca Cobb to break down all the clues Clare picks Dale that the average viewer may have missed.

Though Cobb says Clare was visibly excited to meet the other suitors, "no one got her blood pumping like Dale." While watching Dale exit his limo, Clare showed what Cobb calls anticipatory body language: shoulders pulled up slightly, hands clasped together, swaying gently from side to side. It's like "she's hurrying Dale to get to her faster," Cobb says. "Look at the hug — [Dale is] sweeping her off her feet and pulling her super close. When he introduces himself to Clare, he's rocking back and forth on his feet, which indicates that he's feeling excited and nervous."

From there, "Dale sweeps his thumbs across the top of Clare's hands, not only to make a connection with her, [but also as] a way for him to calm his nerves." When Dale walks away, Clare is overwhelmed. "She's trying to calm her physiological excitement by walking around and taking deep breaths," Cobb says. "She's fanning her face because she's feeling the heat of her body temperature rising. She's in a physiological overload!"

When Clare gave Dale the first impression rose, she also initiated a kiss. "[Dale] wasn't sure what to do," Cobb says. "It took him like a half a second, and then he was like, 'Oh, OK.' You could see the wheels turning."

Cobb adds that it was a significantly more passionate kiss than the ones Clare shared with other men. "It wasn't just a little peck. It was more of an extended kiss, and you do that — particularly with somebody you don't know — when you feel something," Cobb says. "She didn't do that with anybody else."

Their Interactions In The Supertease

In the Bachelorette teaser that aired at the end of the premiere, Cobb observed some telling body language between Clare and Dale. "When [Clare is] kissing Dale, it looked like she wrapped her hand tighter around his neck than she did with any of the other men," Cobb explains. "And to pull somebody closer to you...that's very different" than, say, if you rest your hands on someone's shoulders to stabilize yourself.

The clip also shows Clare addressing the guys after presumably revealing her decision to be with Dale. "She's very confident in sharing her position about love," Cobb says. "People may agree or may not agree, but she's still holding firm. And I think that's pretty powerful, because a lot of people would be like, 'Oh, all these other people disagree with me, so maybe I'm not right.’ But she has her feet planted in the ground."

That confidence, Cobb says, is part of what might attract Clare and Dale to each other. "You end up attracting what you're putting out. So other men who feel the same way or similar way about love, you're going to end up attracting that. And that's going to be more of a match."

More like this
You Can “Fall In Love” At The Resort Where Bachelor In Paradise Season 8 Was Filmed
By Brad Witter
The 'Bachelor In Paradise' Schedule Shifts To 4 Hours Every Week After The Season 8 Premiere
By Brad Witter
‘The Ultimatum: Queer Love’ Is Officially On The Way
By Radhika Menon and Kadin Burnett
The New Bachelor Will Be Announced Next Week & Here Are The Top Contenders
By Grace Wehniainen
Get Even More From Bustle — Sign Up For The Newsletter