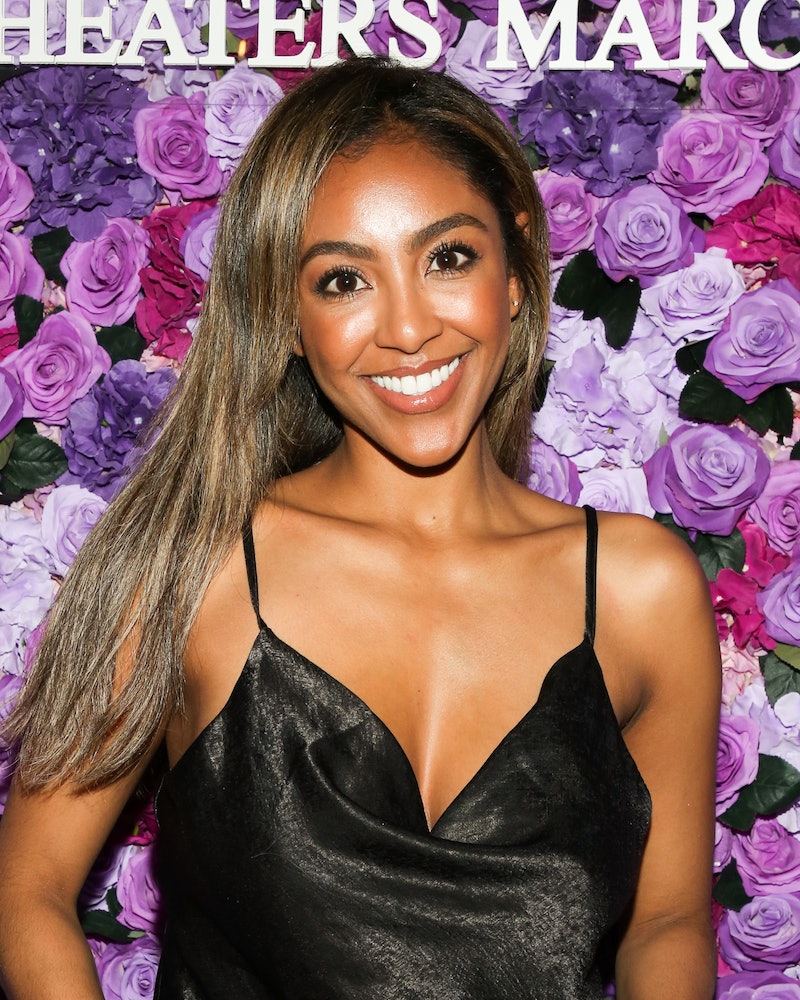 As one of the top candidates for Season 16 Bachelorette, Tayshia Adams was likely let down when Clare Crawley got the gig. Little did she know she would ultimately replace Clare as Bachelorette when the hairstylist found love just two weeks into filming. Reports of the transition surfaced on Aug. 3 when Entertainment Tonight reporter (and Bachelorette host Chris Harrison's girlfriend) Lauren Zima confirmed the news. Still, nothing is for certain, as ABC has not officially confirmed or denied the news. Still, even the network has been dropping hints of the drama to come. And if that isn't enough to convince you it's happening, there are plenty of other clues that will.

Tayshia went from posting to Instagram at least once a week to completely dropping off the platform for over a month. Her final post before the hiatus was shared on Aug. 4, a day after her Bachelorette news broke, but it was sponsored content, so it could have been scheduled in advance. She didn't return to Instagram until Sept. 12, when she shared a photo to celebrate her 30th birthday. "I am 30, I am definitely flirty, And I’m fkn THRIVING!!!" she wrote. Perhaps that's because she found love?

Chris Harrison is dropping all the hints.

In an Oct. 6 interview, Refinery29 asked Harrison why Tayshia hasn't appeared in early show promos. Naturally, he went around the question with his answer, saying that this season is "all about Clare. Up until the time… it doesn’t need to be. And people will have to watch and see if that happens.”

In a Sept. 29 interview with ET, the host admitted that Tayshia's "not not the Bachelorette," adding that the season "goes up on the Mount Rushmore of wild seasons of Bachelor and Bachelorette."

Clare may have accidentally spoiled it.

If Clare did leave the show, she may have confirmed it by making her presence known on social media and liking (then immediately unliking) a tweet congratulating Tayshia on the new role. (This piece of evidence also surfaced on Aug. 3.) Plus, in an extensive July 31 Instagram Live, per The Daily Mail, franchise authority Reality Steve said he could confirm that Tayshia was at the La Quinta Resort & Club, where quarantined filming took place.

When Demi joined Reality Steve's Instagram Live, he asked her what Tayshia's been up to. The former Bachelor in Paradise star said she wasn't "in the loop" after being on vacation, but admitted that she tried to text Tayshia and noticed her messages didn't go through. She added that her texts turned green, which, for a thread between two iPhones, indicates that a person's phone is off. In conclusion, Tayshia's phone was likely turned off and was perhaps being held by The Bachelorette production.

When the show premieres on Oct. 13, more details will be revealed, but as Harrison told ET, it's definitely going to be an "explosive" season.