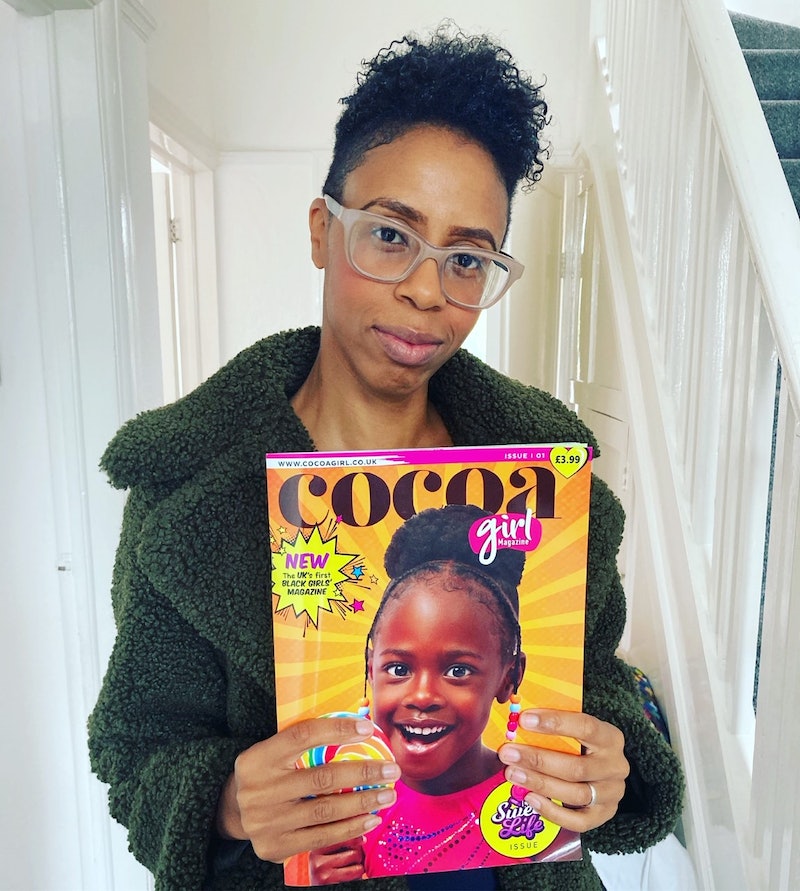 If you ask any Black adult in the UK what magazines they read growing up, it would most likely be ones filled with pages, columns and advice for people who looked nothing like them. And, this lack of visibility is far reaching. The Guardian reports that just 4% of protagonists in children's books in the UK are from BAME backgrounds, while the publishing industry is 90% white. That said, it comes as no surprise that it’s taken until 2020 for the UK’s first magazines for Black children to be released.

Serlina Boyd came up with the idea when her daughter Faith was having a tough time with self-image and confidence, as she “was being treated a little bit unkindly at school because of what she looked like”. Serlina moved Faith to another school, and went looking for Black dolls and books featuring Black children. With few options, she decided to create her own book celebrating Black girls, titled Cocoa Girl. Although this attracted a bit of media attention, it wasn't until this year, when Serlina turned the book into a bi-monthly magazine for children aged seven to 14 – and created another for Black boys, too, Cocoa Boy – that the UK took note.

Serlina was warned by naysayers that there wouldn’t be a need for her magazines, and that something this specific for Black children could easily run out of content. But in fact, it's been the opposite, selling 11,000 copies since it launched in June, per the BBC. “There's just so much we can't even fit in one issue," Serlina confirmed.

Cocoa Boy and Cocoa Girl cover a wide range of subjects, showing Black children the breadth of who or what they can be when they grow up, something that hasn’t historically been the case. While the entertainment industry has seen Black people achieve success, “I wouldn't have wanted to be a dancer or an actress. I [wanted to be] something else,” Serlina says. Growing up, she mentions one teacher who encouraged her to become a graphic designer. “If he never said that to me, I don't know what I would have been,” she says. “But a lot of children don't have teachers like that.” She's hoping Cocoa Boy and Cocoa Girl will help to provide that encouragement.

Serlina also wants the magazines to fill the space left by the curriculum to educate children on Black history. “They don't know their history because the curriculum isn't teaching it in schools, ” she says. The first issues include a “Voyage to Africa” feature, which will be part of a series, starting in Ghana.

Serlina's dreams for the future of Cocoa Boy and Cocoa Girl? She would love to see it advertised on television, see the magazines in shops, and keep it full of “amazing leaders”. Now she’s able to spread the love, education and confidence much further than her own child. “It's it fills my heart with joy that there is a change coming,” she says, “And, you know, this shouldn't just be the only magazine, let’s saturate the market.” Serlina’s overarching message and vision is clear: “They cannot be what they cannot see.”

More like this
Gen Z Are Twice As Likely To Identify As Queer, According To New Data
By Sam Ramsden
What The UK Blocking Scotland’s Gender Recognition Bill Means
By Sam Ramsden
The UK Government Is *Finally* Banning Conversion Therapy
By Sophie McEvoy
Here’s Where The NHS Nurses’ Strike Currently Stands
By Sophie McEvoy
Get The Very Best Of Bustle/UK
Sign up for Bustle UK's twice-weekly newsletter, featuring the latest must-watch TV, moving personal stories, and expert advice on the hottest viral buys.