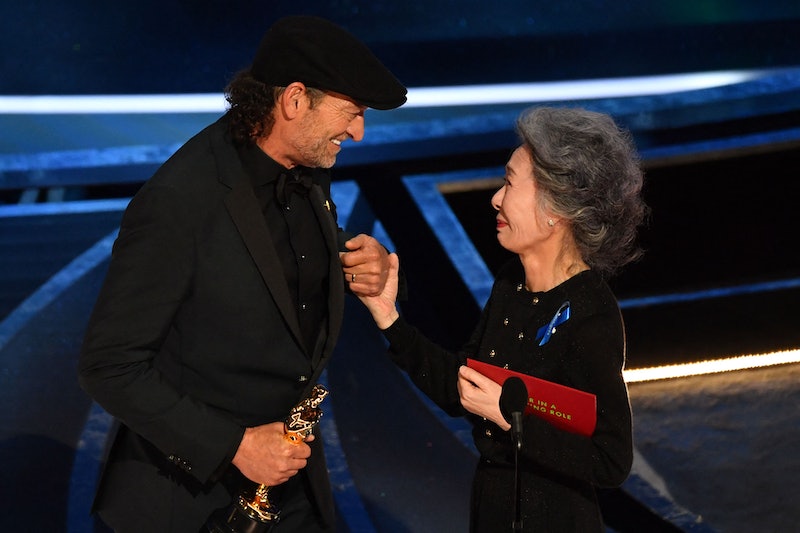 In one of the Oscars’ sweetest moments, last year’s Best Supporting Actress winner, Youn Yuh-jung (Minari), used American Sign Language (ASL) to announce deaf actor Troy Kotsur’s win for Best Supporting Actor. Kotsur won for his role in CODA, which centers on the child of deaf adults who discovers her love for music. Kotsur plays a fisherman who relies on his hearing daughter for his business and must come to terms with the fact that her dreams for life are much bigger than their small town.

Before announcing Kotsur’s name out loud, Youn put the red envelope under her arm and signed the announcement that the CODA actor had won the award, making him the first deaf man to win an acting Oscar. Kotsur’s speech and Youn’s ASL announcement quickly became a favorite on Twitter, where celebrities and general Oscar viewers alike immediately celebrated the moment of inclusivity and the respectful presence of Youn as Kotsur delivered his heartfelt speech, which he dedicated to the Deaf community.

Live-tweeters mentioned that the moment brought them to tears, both as a historical moment unfolding onscreen as well as the content of Kotsur’s heartfelt speech. Kotsur used his time on stage to thank his father, who was in a life-altering car accident that left him paralyzed from the neck down and rendered him unable to use ASL to communicate with his son.

As an English interpreter conveyed Kotsur’s words during the broadcast, his voice also began to break with emotion, which Twitter found just as moving as the speech itself.

Youn began her presenting bit with a self-aware joke about mispronouncing the nominated actors’ names, but Kotsur’s win and ASL speech ultimately shone a light on the typically western-focused and English language awards show. Users on Twitter noted that the moment between Kotsur and Youn showcased the global, diverse appeal of film.

More like this
Kimberly J. Brown & Daniel Kountz Looked Back On Their ‘Halloweentown’ Romance
By Stephanie Topacio Long
All The Sneaky Lindsay Lohan Movie Easter Eggs In Her New Ad, Explained
By Stephanie Topacio Long
Howard Stern's Net Worth: Is He The Richest Man In Radio?
By Hugh McIntyre
What Is Ariana Grande's Net Worth? When It Comes To Money, She Has No “Problem”
By Hugh McIntyre
Get Even More From Bustle — Sign Up For The Newsletter