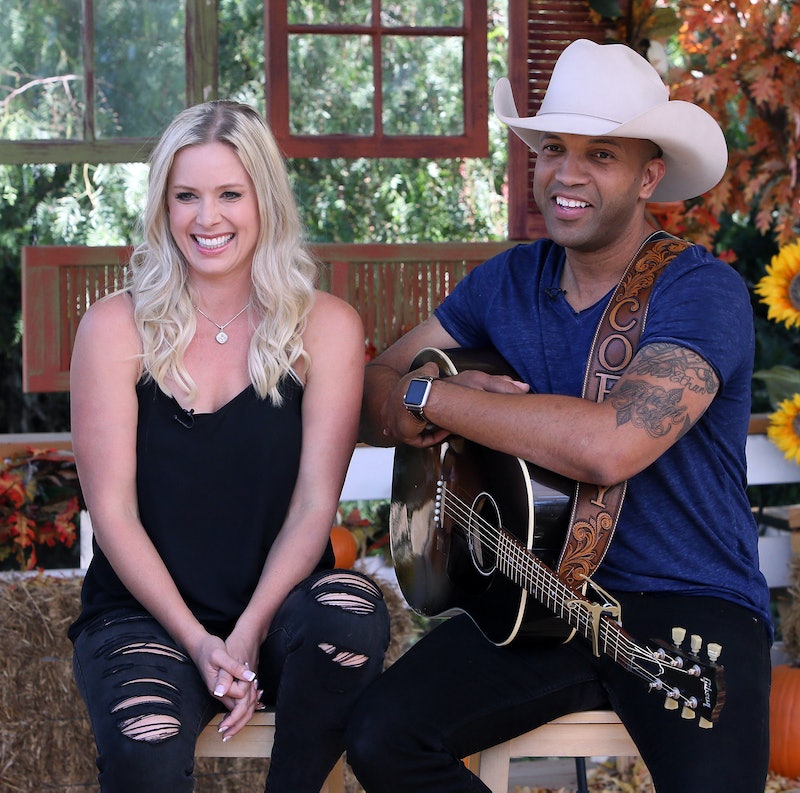 Country singer Coffey Anderson may be the more recognizable name in Netflix's new reality show Country Ever After, but his wife, Criscilla Anderson, is remarkable in her own right. A hip-hop dancer and choreographer, Criscilla has performed alongside artists like Snoop Dogg, Britney Spears, and Rihanna, and she continues to dance even after a 2018 stage 4 colon cancer diagnosis. The show will chart her journey through chemotherapy, so here's everything to know about Criscilla as you dive into Country Ever After.

Per IMDb, Criscilla first appeared in the Learn to Hip Hop dance tutorial series and had cameos in films like Alvin and the Chipmunks and Accepted. You may have also spotted her in Drake & Josh and That's So Raven. On top of those impressive credits, she's performed on stage and in music videos for artists including Kelly Clarkson, Katy Perry, Lady Gaga, Akon, and Lil Wayne.

How Did Coffee and Criscilla Meet?

According to People magazine, Criscilla met Coffey at church through mutual friends. Despite coming from two very different backgrounds — a country singer from a small town in Texas versus a city-living hip-hop dancer — they connected and began dating in 2008. A year later, they tied the knot on Valentine's Day. They now have three children together: 8-year-old Ethan, 6-year-old Emmarie and 2-year-old Everleigh.

Criscilla's Instagram tracks her journey through chemotherapy and showcases her latest choreography classes. She also posts plenty of family photos and updates on her kids.

If you're interested in learning Criscilla's choreography for yourself, she posted some tutorials on what appears to be their family YouTube page. And if you keep clicking around on their page, you can see she even did a couples dance with Coffey to Bebe Rexha's "Meant to Be." For those who want to check out even more of her performances, she also features in several dance videos by choreographer Phil Wright and fellow dancer Kendra Byrd.

In May 2018, Criscilla began to feel severe stomach pains, which led to doctors diagnosing her with stage 3C colon cancer. The cancer went into a brief remission after she underwent surgery and treatment, but it resurfaced in 2019 as stage 4 cancer.

“The cancer has spread throughout my para-aortic region and has begun growing up my back,” she explained to People. “My ultimate goal is to be in remission and have it not be chronic but be in a situation where it can be completely healed. The ideal, if that cannot happen, would be to keep it maintained and have it not spread any further for the rest of my life.” She added that her cancer is likely "treatable, but not curable."

In May 2020, Criscilla revealed to People that she opted out of traditional chemotherapy treatments in favor of natural and experimental remedies, like high doses of vitamin C, barometric chamber infrared saunas, and a keto diet. "I'm holding off on chemo at the moment and letting the natural stuff do its work," Criscilla said. “I’m staying diligent with my supplements and my diet and just letting God work his miracle on me."

Based on an Oct. 21 Instagram post, Criscilla is currently having difficulties with her immunotherapy medication but continued to thank her "village" for supporting her. “I’ve never seen a stronger, more focused person on purely staying alive than her,” Coffey told People. “Not only does she do all she can for her health, but Criscilla has sheltered our kids from the ugly side of this fight.”

Despite everything, it appears that both Coffey and Criscilla are determined to stay positive, and filming Country Ever After seems to have only strengthened their bond. As Coffee tells Criscilla in the trailer, "I'm not going anywhere. I'm going to drive you crazy... for the next forty years."