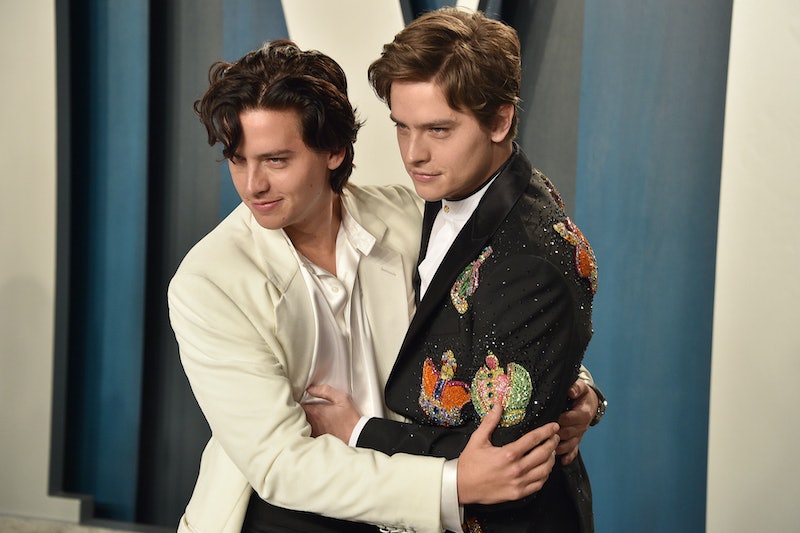 Dylan Sprouse is making his long-awaited return to TV — but not without a good ol' roast from his twin brother. Cole Sprouse roasted Dylan after he landed a role in Mindy Kaling's new show, and even for a brotherly barb, the shade was cold. But Kaling's reaction to the lighthearted Instagram shade was even better.

On Dec. 16, Dylan took to Instagram to share a Variety article announcing that he was cast in Kaling's new HBO Max comedy series Sex Lives Of College Girls. This will be his first TV role since playing Zack Martin on The Suite Life of Zack and Cody and its subsequent spin-off, The Suite Life On Deck, which ended in 2011. "Been a while since I've done a series...roughly 10 years," he wrote. "But it's because I was hoping for a good one, and this seems like a great one. Happy to be onboard alongside a great cast and crew. Thankful today."

Rather than celebrating his brother's achievement, Cole chose to completely roast him instead, as most good siblings would. "What are they gunna do when they find out you're not funny?" he commented on Dylan's post, as captured by the @commentsbycelebs Instagram page. Kaling jokingly responded to his comments with concern. "Oh no," she wrote.

Despite the trolling, Dylan's new job is likely not in jeopardy. On The Sex Life of College Girls, the actor will play Nico, a junior at Essex College whose life intertwines with the four new roommates that the upcoming series focuses on (aka, he'll be a potential love interest). Kaling is creating the show as part of her production company, Kaling International, and will also serve as co-writer and executive producer.

The show's lead roles were confirmed in October. Pauline Chalamet (yes, sister to Timothée) will play Kimberly, the valedictorian of an Arizona high school who's not prepared for the social aspects of college, and Amrit Kaur will star as Bela, an aspiring comedian and "extremely sex-positive" student from New Jersey. Reneé Rapp will portray Leighton, a rich Upper East Side girl who thinks she's classy, but everyone around her would like to disagree. Alyah Chanelle Scott rounds out the cast as Whitney, the daughter of the most powerful Black senator in the U.S. who soon grows to become Essex's soccer superstar.

Cole made his own return to television in 2017, playing Jughead on the hit CW series Riverdale, so his joke definitely wasn't made out of jealousy. Instead, it seems his comment was merely part of a harmless sibling rivalry between one of our favorite sets of celebrity twins. This isn't the first time they've trolled each other and it likely won't be the last, either.