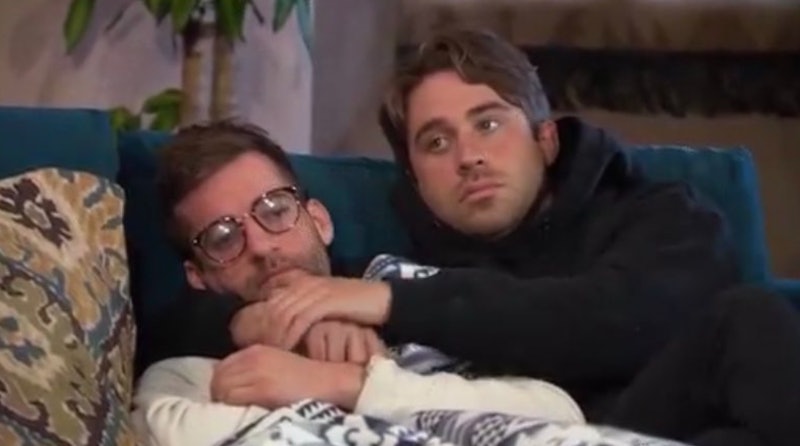 Twitter has a new favorite couple on The Bachelorette, and it doesn’t involve lead Katie Thurston. During a brief moment on Monday night’s episode, the camera panned to Connor B. and Greg cuddling, and now fans are calling for them to get their own spinoff. “Cant help but notice Greg and Connor B have chemistry and that is a twist I would happily welcome and am hoping for to be honest,” tweeted the Betchelor podcast. “Can we discontinue the bachelorette and continue with Greg and Connor’s journey??” wrote another viewer.

The two’s relationship has come a long way since night one, when Connor B. arrived at the Hyatt Regency Tamaya Resort in a full cat costume and Greg charmed fans by presenting Katie with a macaroni necklace made by his niece. After having a steamy, whisker-smudging makeout session with Katie, Connor was disappointed that she awarded Greg the first impression rose instead of him. But there’s clearly no bad blood between the two now. Despite the fact that they’ve both emerged as strong contenders for Katie’s final rose, this isn’t the first time Connor B. is has nestled into Greg’s welcoming elbow crease, according to other photos of the pair that Twitter dug up.

Audiences also took note of the tender interactions that are taking place amongst the men in the house. Though there’s been no shortage of petty drama, there have also been plenty of moments in which the guys have eschewed the show’s usual toxic masculinity in order to have vulnerable conversations with one another. This week, for example, Michael decided to tell the other contestants about his late wife. "We're all here because we want to find a woman to support, share memories with, navigate life with," he said. "And it's the most beautiful thing when it happens. And when you find it… you don't know how long you'll be blessed with that time. I mean, I'm widowed."

A teary-eyed Greg was stunned, given Michael’s positive attitude. But as Michael explained, "When you see somebody fighting for their life that you love, and there are so many things outside of your control, you find positive even when your world is falling apart,” adding that he didn’t share his history with the other men sooner because he didn’t want to be seen as “the sad dude.”

Maybe Connor B. can let Michael borrow Greg’s arm for a night?