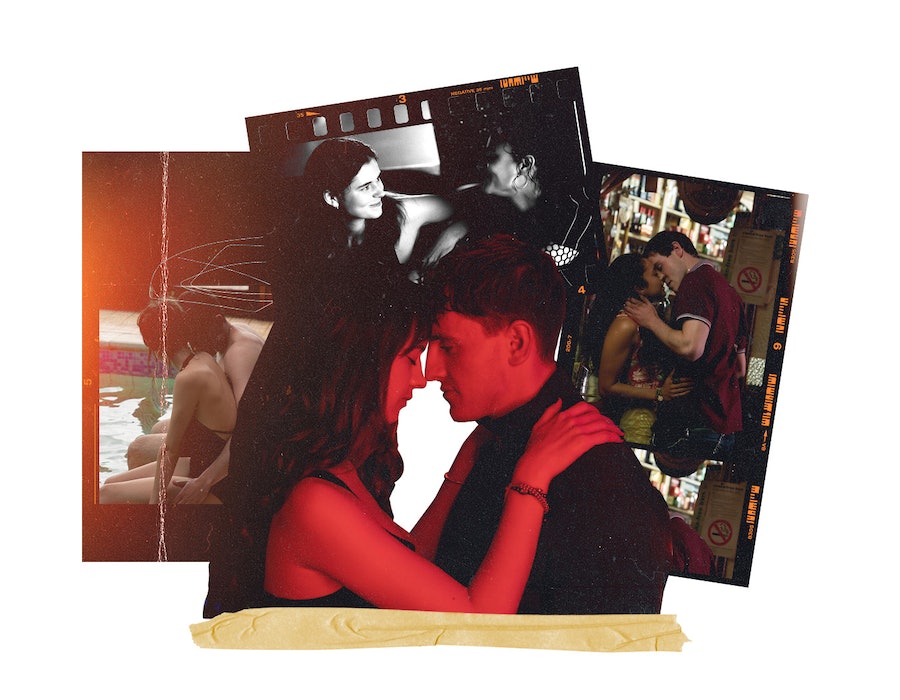 For all of Rooney’s characters’ precociousness, they’re dense when it comes to their own emotions. All are unable to express how they feel about one another outside of achingly intimate physical acts. “What they discover about themselves through intimate expression is something other than what they share through how they speak to each other,” Normal People and Conversations with Friends intimacy coordinator Ita O’Brien tells Bustle. “I think it's [about their] longing, discovery, and also agency. Particularly for her female characters.”

It’s one thing to imbue a novel with feelings of longing, discovery, and agency — the written word provides plenty of access to characters’ internal thoughts — but physically conveying that on screen is another challenge entirely. Yet Rooney’s television collaborators have been able to transmute these emotions into some of the most highly acclaimed sex scenes on television.

Both series share a similar visual language, especially when it comes to their sex scenes. Fans of the show will recall frequent shots of particular body parts (remember the thirst for Connell’s chain?) as well as tons of close-ups. “We describe it as being ‘inside the frame,’” says director and executive producer Lenny Abrahamson. “You stop being aware of it as a shot and feel like you've actually sort of gone inside the characters’ heads.”

The way they achieve this is by keeping the camera as tight on the actors as possible. “We stand very, very close to people. [Focusing on their] head, shoulders, faces, hands and things like that,” he says. Yet Abrahamson is also conscious of when they need to back it up. “If we didn't show [full] bodies, you would feel that there was a kind of taboo. So that [balance is] one of the challenges.” O’Brien, too, praises the power of the tight shots. “We're being shared a private and inside view of who these two people are together. That feels so special,” she says. “It's like [watching the] opening of a petal.”

Rooney knows that sex is about more than the physical act itself. In her characters’ interactions, everything teems with sexual tension. A stolen glance can be a form of foreplay; a cold rush. The creators make sure to play up those sensory-driven elements on the screen, too. “There's certain motifs [we employ] like having something cold on the skin. We had the scene when [Connell and Marianne] were eating the popsicles and she put it on her cheek,” O’Brien says of the seemingly benign moment that leads to them sleeping together in Normal People. “Then we had that same motif when Frances and Nick first kissed. He's drinking a bottle of beer [and presses it to her chest].” These small, evocative moments are just as hot as the sex acts that follow them.

Before shooting, the creative team will map out every aspect of a sex scene. “We find the bare bones of it, the shape of it, the quality,” says O’Brien. Choosing which sex position the actors will perform is a key decision that sets the tone for the rest of the scene. Take the scene in Conversations with Friends where Nick and Frances secretly sleep together in Croatia, only to be discovered by Frances’ ex, Bobbi. “We had lightning storms and our schedule was absolutely brutal. But because we’d worked so closely across both series and the actors were very comfortable, we were able to find the shape of that scene,” Abrahamson says. “[We landed on] the way he holds her and having them both facing us. We are creating body changes that will lead to images.”

Much was made of the nudity in Normal People, and throughout the course of the series, both characters appear fully unclothed. Showing genitalia onscreen was a racy choice, but according to Abrahamson, it was also an important one in terms of storytelling. “Marianne is a virgin at the beginning of the story and Connell isn't, but he's very guarded as a character,” he explains. “Showing them together in that way felt like it was breaking out of the idea of that as somehow provocative. It's beautiful.”

While Conversations does feature nudity, none of the characters go full frontal. “You're dealing with characters who are a little bit older and for whom [nudity] isn’t such a shock,” says Abrahamson. Whether or not there’s nudity is beside the point for O’Brien; all that matters to her is that there’s an equal amount of it among scene partners. “Before the intimacy guidelines, perhaps more women [were] being asked to be naked,” she says. “[But with these shows] there’s an equality of nakedness with all characters that are engaging in intimate content. I think that's good, right, and proper.”

More like this
Here’s Who Victor Chooses In The ‘Love, Victor’ Season 3 Finale
By Brad Witter
The ‘Love, Victor’ Showrunner Gave Fans Hope For A Possible Spinoff
By Brad Witter
Kim Kardashian Reveals The First Text She Sent To Pete Davidson
By Jake Viswanath
Pete Davidson Pops Up In This Hidden Scene From The Kardashians Season Finale
By Jake Viswanath
Get Even More From Bustle — Sign Up For The Newsletter