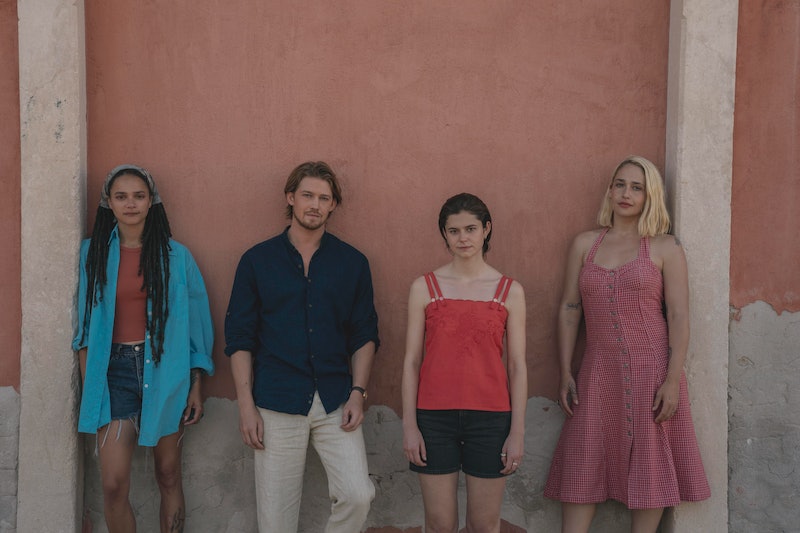 Between in-depth analysis of Connell’s chain and non-stop chatter about those bedroom scenes, the TV adaptation of Sally Rooney’s Normal People book became an instant lockdown success, globally. So, when it was announced that the BBC was going to adapt another one of her works, fans were understandably eager to learn more. A first proper glimpse of the new Conversations With Friends series was recently released, teasing the 2017 novel’s complicated love story between exes and best friends, Frances and Bobbi, and their intertwining relationships with married couple Melissa and Nick. Here’s everything we know so far.

During a reunion Q&A for Normal People, Lenny Abrahamson (the director of both Normal People and Conversations With Friends) revealed that filming began back in April 2021. At the time, the director was not entirely sure when the series would air.

However, it has since been announced that Conversations With Friends will arrive on BBC Three and BBC iPlayer on May 15, 2022. Along with the release date confirmation, BBC Three also shared a sneak preview of the new series, during which some of the show’s central characters interact for the first time.

In a teaser video unveiled back in December 2021, BBC revealed Conversations With Friends as one of its many new shows due to air in 2022. The BBC also released the first look of Alison Oliver in the starring role of Frances, to help stir even more anticipation for the pending series. Unsurprisingly, the first-look pictures got fans desperate for more information about the show.

Is Conversations With Friends a sequel to Normal People?

No, but it does continue the theme of young people navigating adult relationships. Rooney’s debut novel is set in Dublin and follows the lives of students Frances and Bobbi. Smart, bold, and sensitive, they walk the very fine line of being exes and best friends. But their relationship is put under an intense microscope after they meet an enigmatic couple, Melissa and Nick.

Frances and Bobbi enter a world of publishing parties, secret affairs, and emotional manipulation, and it soon becomes clear they might be in over their heads. Rooney discussed topics of feminism, class, and growing up in Normal People and many of the same things are touched upon in Conversations With Friends.

“What we’ve ended up with is something that has a kind of aesthetic family resemblance to the other series,” Abrahamson told Vanity Fair, “but is definitely its own thing.”

Still, Abrahamson was open to the idea of some sort of crossover. Asked during the reunion Q&A in March 2021 if the two shows would take place in the same universe – and if Marianne could pop up somewhere in the background – the director said: “Yes, that’s perfect! And Connell could be some moping boy in the background, licking his pencil. Now we’re talking, that’s gold!”

The Conversations With Friends cast was finally revealed in February, and includes a mixture of newcomers and familiar faces. Frances will be played by Alison Oliver, who went to the same drama school as Paul Mescal, per BBC. Sasha Lane plays Bobbi, who you’ll recognise from American Honey and the U.S. remake of Channel 4’s Utopia.

As for Melissa and Nick, they’ll be played by Jemima Kirke and Joe Alwyn. Kirke starred in Girls as Jessa (and more recently played the new headteacher in a certain Netflix British teen drama), and Alwyn is known for his roles in the 2019 adaptation of A Christmas Carol and The Favourite, as well as being Taylor Swift’s boyfriend.

Much to the delight of Sally Rooney’s fans, BBC Three released a teaser trailer of the Irish drama back in February, while an extended trailer was released by Hulu in April.