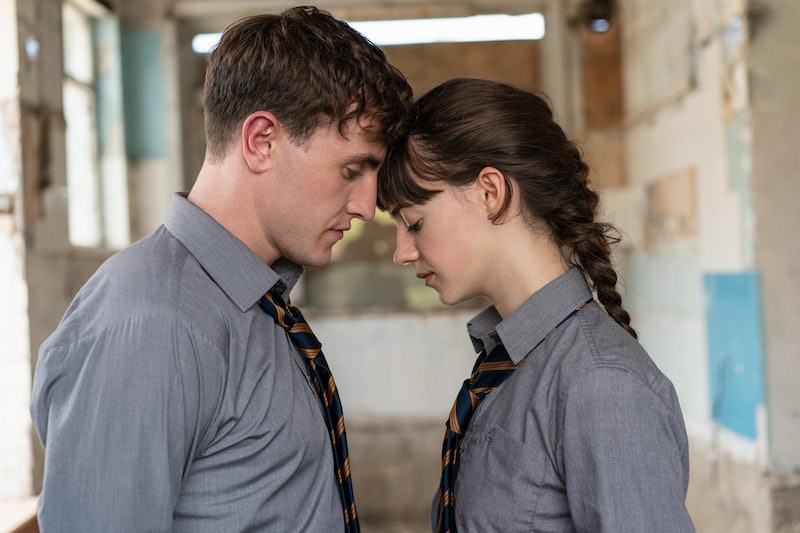 There is a lot of nakedness in Hulu's Normal People, both physically and emotionally. As two Irish teens stumble through passionate, imperfect sex, you feel as if you've been allowed an intimate look at two human beings' most private selves. Marianne is wry, bookish, and self-assured, unconcerned with others' opinions of her yet desperate for the love she can't find within herself; Connell is deeply intellectual and sheepishly charming, frequently stymied by his insecurity and propensity to overthink. The two begin having clandestine hook-ups and fall secretly in love, separated by the hierarchies of social class and high school cliques. They feel for each other profoundly but often fail to verbalize it, resulting in a prolonged and torrid love affair propelled more by what isn't said than what is.

That unspoken tension made translating Sally Rooney's introspective 2018 novel into a television series especially difficult. But the show doesn't shy away from silence. Whereas the book was guided by Marianne and Connell's revealing narration, Hulu's adaptation relies on their physicality, punctuating limited dialogue with lingering close-ups that capture each ache in studied detail. The perspective shifts readily from person to person, but is at times pointedly obscured: you see an earlobe, a shoulder, the back of someone's head.

"You want an audience to feel like they're seeing what's really happening, but at the same time I don't like to put people at a perfect vantage point," co-director and executive producer Lenny Abrahamson tells Bustle. "That makes the viewer want to lean in and understand more."

In the absence of narration, their confusion is more sharply felt.

It also acts as a parallel for the miscommunications that regularly force Marianne and Connell apart, at first because they're young and afraid to express themselves vulnerably, and later due to deeper emotional problems that become more apparent as the story unfolds. In the absence of narration, their confusion is more sharply felt. "You can kind of drift between points of view without it being as obvious as in a piece of writing, where you absolutely know whether it's the narrator or a particular character," Abrahamson says.

For stars Daisy Edgar-Jones (Marianne) and Paul Mescal (Connell), the challenge was in deciphering how the characters' internal intensity would translate naturally onscreen, rather than trying to overcompensate by heightening it. "[Connell] thinks really quickly and thinks deeply about things, but he expresses that incredibly slowly, if at all," Mescal explains. Ultimately, Abrahamson and co-director Hettie Macdonald "trusted us as actors to do less."

As Marianne and Connell move from high school to university and into early adulthood, they grow together like vines: weaving in and out of each other's paths, separate and yet entangled. They date other people, discover their passions, and apologize for how they've mistreated each other, eventually building a relationship rooted foremost in care and friendship, not adolescent lust. This enables them to begin articulating themselves more openly and directly. Still, it's "baby steps rather than big moments or revelations," showrunner Ed Guiney says.

If Marianne and Connell's inability to say how deeply they love each other is what kept them apart for so many years, it's freely sharing it that separates them in the end.

It's not until the penultimate episode that Marianne finally admits to Connell how much of an enigma he is to her. "I think Connell feels that Marianne knows herself and that she's confident in that, and it's the first time she's really said, 'I don't find it obvious what you want,'" Edgar-Jones says. Hours later, after confronting Marianne's abusive brother and vowing to never let anyone hurt her again, Connell makes what he wants clear.

"[Their] capacity to really speak to each other ultimately overcomes the insecurities and obfuscations that have been between them in the past," Abrahamson says. "They really have arrived at a kind of understanding of who they are and what their relationship means."

If Marianne and Connell's inability to say how deeply they love each other is what kept them apart for so many years, it's freely sharing it that separates them in the end. Connell is accepted into a writing program in New York City, while Marianne doesn't want to leave her life in Ireland. For the first time, they make the decision to part actively and together — willing to do what's best for each other even when it's most painful. It's an ending to a love story that's as exquisitely agonizing as its beginning — though with a little hope, it's more of an ellipsis.

More like this
Nicola Coughlan Shared A Lady Whistledown Excerpt From ‘Bridgerton’ Season 3
By Grace Wehniainen, Alyssa Lapid and Sam Ramsden
Viserys’ Fate On 'House Of The Dragon' Could Differ From The Book In This Surprising Way
By Grace Wehniainen
There's At Least 1 Major Difference Between The 'Vampire Academy' Book & TV Series
By Grace Wehniainen
'Reservation Dogs' Season 3 May Finally Mend Bear & Willie Jack’s Relationship
By Gretchen Smail
Get Even More From Bustle — Sign Up For The Newsletter