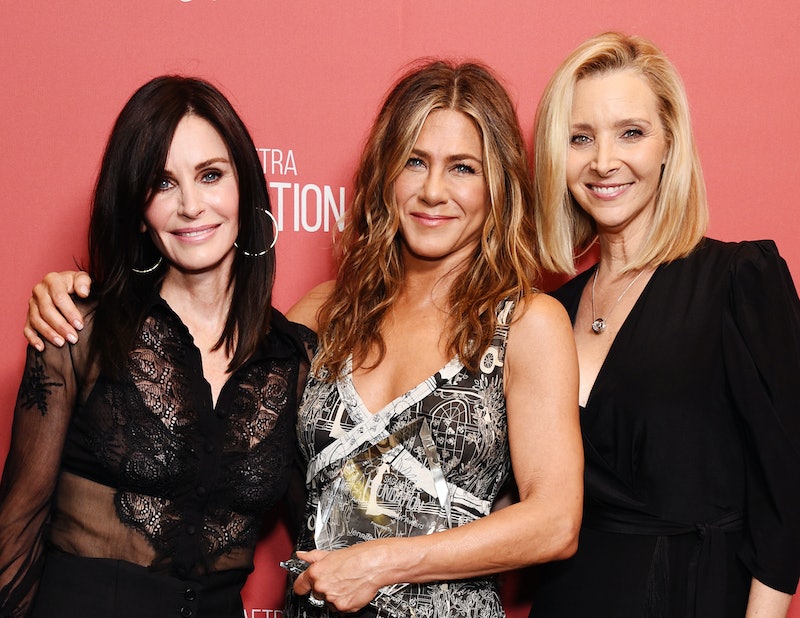 Somehow, Courteney Cox was the only main cast member of Friends to never get nominated for an individual Emmy — until now. Cox finally received an Emmy nod as an executive producer of Friends: The Reunion, which was nominated for Outstanding Variety Special on July 13. However, that may not be enough to make up Cox’s decade-long snub for her iconic role as Monica Gellar.

In a July 21 interview, Cox expressed gratitude that the Television Academy acknowledged the HBO Max reunion special. “Honestly, I am so happy that the reunion has been recognized because I think it's terrific,” she told Entertainment Weekly. “[Director] Ben Winston did a great job and all of his crew.” But it wasn’t the redemption she wanted after getting snubbed during the show’s 10-season run from 1994 to 2004. “That’s not exactly the Emmy I was looking for,” she said. “I’m being honest with you.”

Cox’s Friends co-stars Jennifer Aniston, Lisa Kudrow, Matthew Perry, David Schwimmer, and Matt LeBlanc were all nominated in the comedy acting categories at least once during the show’s 10 seasons. Kudrow received the most nominations, with six nods, followed by Aniston with five nods, LeBlanc with three nods, and Perry and Schwimmer with one nomination apiece. Of all five actors, only Kudrow and Aniston reigned supreme, with Kudrow winning Outstanding Supporting Actress in 1998 and Aniston taking home Outstanding Lead Actress in 2002. Overall, the series received an astounding 62 nominations and six wins, including Best Comedy Series in 2002.

In June, Cox opened up about being the only Friends star to not get an Emmy nod in a radio interview with Howard Stern. “Yeah, it always hurt my feelings,” she admitted. “When every single cast member was nominated but me, it definitely hurt my feelings. I was happy for everybody, and then when it was finally like, ‘Oh, I’m the only one?’ It hurt.” Cox added that she never want to take away from her cast’s success, but she still felt excluded from the celebrations. “I want them to win,” she said. “I just sometimes want to be included in certain things, and these girls on the show and the guys, everyone deserved every [nomination].”

Speaking to EW, Cox reminisced on filming the emotional Friends reunion with her former castmates. “I’m so happy to be a part of it,” she said. “I’m so thrilled that I got to do it onstage back at that same studio, the same Stage 24, with those incredible people that I love so much.” She re-iterated that it didn’t feel like true recognition for her work. “That Emmy [nomination] really belongs to Ben Winston,” she repeated. “So yes, I’m so happy. But when I was on Howard Stern, I wasn’t talking about that.”