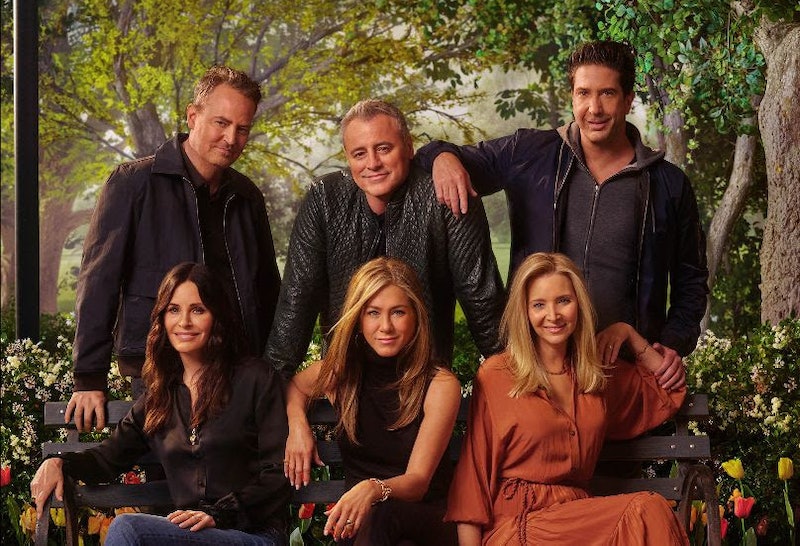 Celebratory Thanksgiving trifles are in order: Not only is the Friends reunion special officially happening, but the highly anticipated event is dropping on HBO Max sooner than you might think. Ahead of the May 27 premiere of Friends: The Reunion, HBO Max released the long-awaited trailer on May 19 (scroll down to watch it).

HBO Max first confirmed in early 2020 that Jennifer Aniston, Courteney Cox, Lisa Kudrow, Matt LeBlanc, Matthew Perry, and David Schwimmer would be reuniting for the unscripted special for the streaming service. Friends creators Marta Kauffman and David Crane returned to helm the special, which was set to launch in May 2020 (before COVID interrupted, well, everything). Along with the soon-to-be-released special, all 10 seasons of the sitcom are available on HBO Max’s library of content.

“Guess you could call this the one where they all got back together — we are reuniting with David, Jennifer, Courteney, Matt, Lisa, and Matthew for an HBO Max special that will be programmed alongside the entire Friends library,” HBO Max president Kevin Reilly said in a statement obtained by Bustle. “I became aware of Friends when it was in the very early stages of development and then had the opportunity to work on the series many years later and have delighted in seeing it catch on with viewers generation after generation.”

The statement continued, “It taps into an era when friends — and audiences — gathered together in real time and we think this reunion special will capture that spirit, uniting original and new fans.”

The confirmation came after reunion rumors initially swirled in 2019 amid the show’s 25th anniversary. Set to serve as executive producers on the special, Aniston, Cox, Kudrow, Perry, LeBlanc, and Schwimmer collectively confirmed the news on Instagram with the same photoshoot. They all captioned their posts, "It's happening."

Now that the special is closer than ever, here is everything we know about the Friends reunion so far.

The Friends reunion will take place on May 27, Deadline announced, and you can watch it on HBO Max. The much-anticipated special has certainly been a long time coming, but just like Ross and Rachel, it promises to be worth the wait.

Also joining will be plenty of other celebrities who are, presumably, Friends fans: David Beckham, Justin Bieber, BTS, James Corden, Cindy Crawford, Cara Delevingne, Lady Gaga, Kit Harington, Mindy Kaling, and Malala Yousafzai. It’ll be a packed house — and it all takes place at Warner Bros.’ Stage 24 in Burbank, where the show was originally filmed.

HBO Max released the long-awaited trailer for Friends: The Reunion arrived on May 19, just a week before the special’s May 27 premiere. “Our favorite friends are back on the set that started it all,” the video’s description reads. The cast members “reunite to discuss everything from their casting process to whether or not Ross and Rachel were really on a break. Witness the unbreakable bond of the group that perfectly captured the moment in life when your friends become your family.”

HBO Max had previously released a teaser promoting the upcoming special. It features the original cast walking arm-in-arm, backs to the camera, at the Warner Bros. lot. The brief clip is set to an instrumental version of the show’s iconic theme song, I’ll Be There for You, and concludes with the tagline, “the one where they get back together.” Aw...

The unscripted special comes as a good compromise for fans who have long lobbied for a reunion. In an interview with Rolling Stone in 2019, Kauffman shut down all possibilities of a scripted reboot and cited inevitable disappointment. “There are several reasons. One, the show is about a time in your life when your friends are your family,” she said. “It’s not that time anymore. All we’d be doing is putting those six actors back together, but the heart of the show would be gone. Two, I don’t know what good it does us. The show is doing just fine, people love it. [A reunion] could only disappoint.”

While an onscreen reunion has been nonexistent up until now, the cast’s frequent reunions documented on social media have long pacified fans. In October 2019, Aniston made her Instagram debut and temporarily crashed the social media platform with her selfie alongside her Friends co-stars. She captioned the viral post, “And now we’re Instagram FRIENDS too. HI INSTAGRAM.”

More like this
The First Trailer For 'That '90s Show' Includes So Many Nods To The Original Series
By Jack Irvin, Alyssa Lapid and Grace Wehniainen
The Kenan & Kel Reunion On SNL Took A Dramatic Turn, Thanks To Keke Palmer
By Brad Witter
'Bridgerton' S3 Teases Exciting Social Season For Penelope Featherington
By Bustle
Courteney Cox Recreated An Iconic 'Friends' Scene To Surprise Fans
By El Hunt
Get Even More From Bustle — Sign Up For The Newsletter

This article was originally published on Feb. 21, 2020