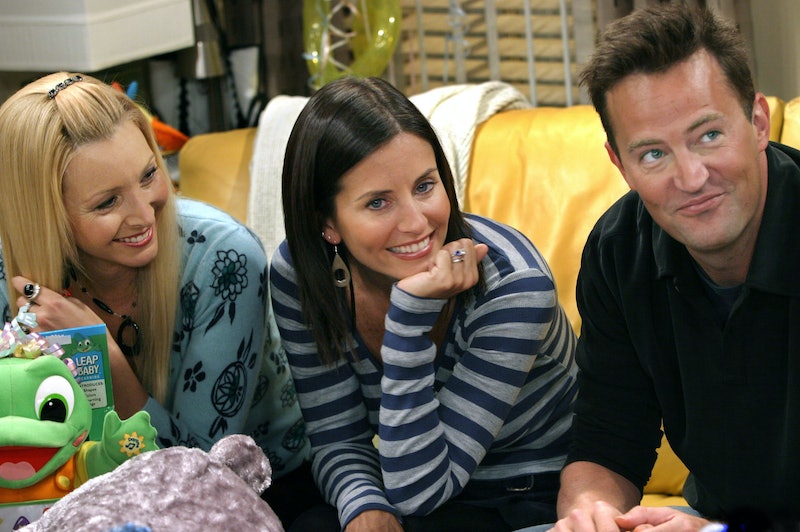 It’s been a long time coming, but the Friends cast finally filmed the highly anticipated reunion special. Understandably, our favorite stars from the sitcom — which aired across 10 seasons from 1994 to 2004 — don’t want to give too much away about what diehard fans can expect once the special hits HBO Max. However, on the May 6 episode of The Ellen DeGeneres Show, Courteney Cox spoke briefly about what filming the reunion was like after it was postponed not once, but twice due to the ongoing coronavirus pandemic.

“It was unbelievable,” Cox told DeGeneres of reconnecting with the cast on the show’s original set. “It was so emotional. It’s an unscripted reunion, but we got to be on Stage 24 for the first time, all of us in, like, I forgot how many years. 15 years? 17 years?” Cox’s comments seem to support what her co-star Lisa Kudrow said a year ago about the event being improvised. “It's not us playing our characters,” Kudrow told The Sunday Times last May. “It’s not an episode. It’s not scripted. It’s six of us coming together for the first time in I don’t know how long.”

Apart from mentioning that there were “a lot of special surprises” while filming the reunion, Cox didn’t divulge any additional details. In fact, when the talk show host asked what she remembers from the set, the 56-year-old actor said she doesn’t recall anything that went down. “Oh god, I have the worst memory,” she said. “Everything came up that I forgot about.” However, she did do a deep dive into the fountain scene from the show’s title sequence, explaining that it looked a lot more fun onscreen than it was in real life.

“We were in that fountain for a long time,” Cox recalled. “I don’t know somebody thought that would be really fun, and let me tell you what happens, it’s not fun to be dancing in a fountain for hours and hours. I remember Matthew Perry saying at one point, and we didn't know each other that well at that point, but I remember — and this was so Matthew — but he was like, ‘Can’t remember a time that I wasn’t in this fountain.’”

Speaking of Perry, the actor was actually the first member of the Friends cast to announce (albeit accidentally) that the reunion had already been filmed. According to Deadline, the actor shared a photo on April 9 of himself in the makeup chair on set. “Seconds before eating a makeup brush,” he captioned the image. “Not to mention reuniting with my Friends.” He then deleted the post, but it was already too late; longtime fans of the hit series were quick to notice the capital “F” in Perry’s caption, which all but confirmed that the reunion was a go.

David Schwimmer was another cast member who perhaps said too much too early. During a virtual appearance on The Graham Norton Show on April 2, the American Crime Story actor revealed that he was on his way to film the Friends reunion and that it would be his first time seeing the cast in “many years.” On April 10, the show’s official Instagram account confirmed it was a wrap. “Could we BE anymore excited!? Friends: The Reunion is coming to @hbomax,” the account wrote alongside a photo from the set. And although the streaming service hasn’t announced when the special will hit the platform, fans can relax knowing that they’ll be seeing their friends again soon.

More like this
Ellen Pompeo & Patrick Dempsey Just Showed Why They Should Team Up Again
By Brad Witter
Kenan & Kel Just Reunited At The 2022 Emmys & Twitter Is Overjoyed
By Grace Wehniainen
Drew Barrymore & Justin Long’s Reunion On Her Talk Show Had Her In Tears
By Radhika Menon
Ben Affleck Wrote A 12-Page-Long Speech For Wedding To Jennifer Lopez, Says Kevin Smith
By Brad Witter and Radhika Menon
Get Even More From Bustle — Sign Up For The Newsletter