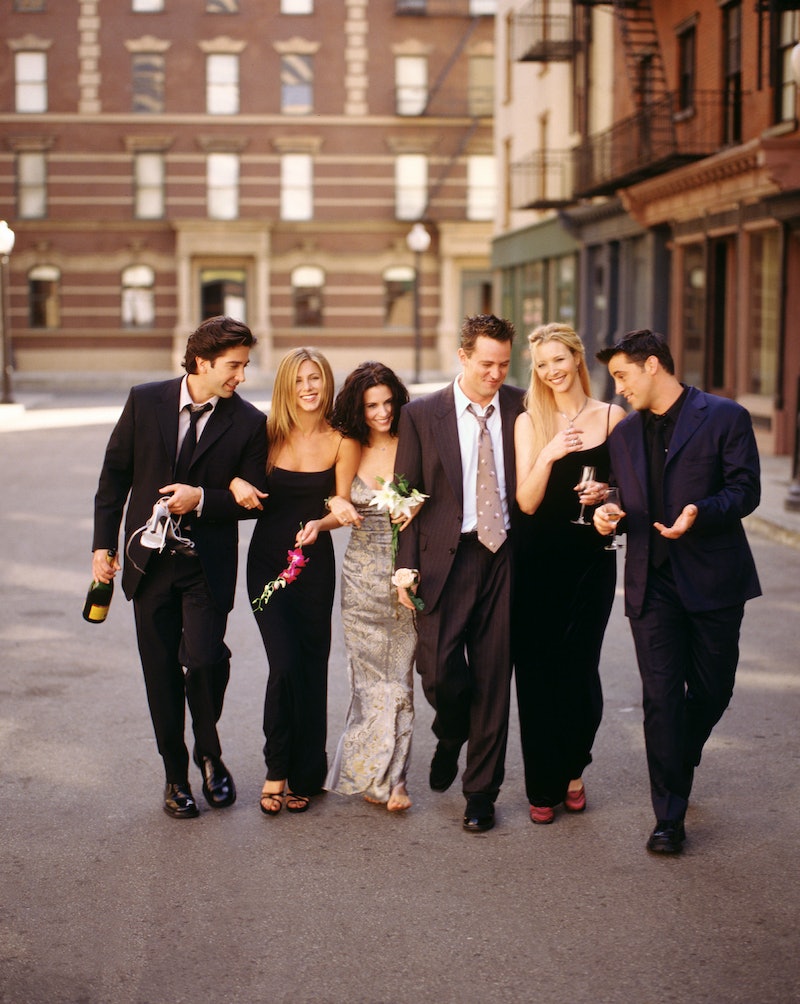 OH. MY. GOD! The Friends reunion is right around the corner — at least according to David Schwimmer. The actor recently appeared on SiriusXM's Radio Andy and confirmed that he's all set to meet up with co-stars Matt LeBlanc, Jennifer Aniston, Courteney Cox, Matthew Perry, and Lisa Kudrow, to finally film the highly anticipated TV special.

"It's happening. Actually, in a little over a month I'm heading out to L.A.," Schwimmer said of the reunion, which has been delayed several times due to the ongoing coronavirus pandemic. "Finally we figured out a way to film it safely and there's gonna be a portion of it that we filmed outside because of safety protocols."

Unfortunately, Schwimmer didn't reveal any other major details about the special. However, he did confirm that Ellen DeGeneres will not be hosting the event as early rumors suggested. "Can you say who is?" Andy Cohen prodded. "You know what? I don't know if I can, actually," Schwimmer responded. "I can tell you it's not Ellen and it's not Billy Crystal. I could tell you who it's not but it could take a while."

Schwimmer's latest reunion update is in line with everything Kudrow said in January during an appearance on Rob Lowe's podcast, Literally! With Rob Lowe. In the interview, she revealed that the cast would start filming together in "early spring" and that she already filmed bits of the special on her own.

"There's different facets to it, and we already shot packages of things," Kudrow said on the Jan. 14 episode of Lowe's podcast. "I pre-shot something already so we're definitely doing it, because I already shot a little something." And although she didn't say exactly what she filmed, she did reveal that the Friends reunion will not be a typical reboot. "It's not like a scripted thing, we're not portraying our characters," she said.

The reunion was first announced in February 2020 and was intended to be available to stream when HBO Max first launched in May of last year. However, due to the pandemic, filming was postponed not once, but twice. "This has also given us more time to make it even more exciting and more fun than it would have been," Aniston told Deadline in August after production was halted for the second time. "So I choose to see it as the glass is half-full that it got postponed."

Perry also gave fans a much-needed update in November 2020 when he tweeted that filming was set to begin in early 2021. "Friends reunion being rescheduled for the beginning of March," he wrote at the time. "Looks like we have a busy year coming up. And that's the way I like it!" That same day, The Hollywood Reporter confirmed that HBO Max was planning a spring premiere date.

Like his castmates, Schwimmer has long been looking forward to the reunion. "I guess what I'm honestly most looking forward to is just being in the room with those other five actors," he told E! News in July of last year. "But being on the actual sound stage on the actual set for the first time in 10 years, the set that we shot on for 10 years, that to me is going to be a really meaningful experience."

More like this
Courteney Cox & Laura Dern Proved Their BFF Status With Matching Tattoos
By El Hunt
Andy Cohen Apologized To Larsa Pippen After A 'RHOM' Season 5 Reunion Dust-Up
By Brad Witter
Ashton Kutcher Wants Danny Masterson “To Be Found Innocent” In Rape Retrial
By Jake Viswanath
'Abbott Elementary' Fans Probably Missed This 'Parent Trap' Easter Egg
By Sam Ramsden
Get Even More From Bustle — Sign Up For The Newsletter
From hair trends to relationship advice, our daily newsletter has everything you need to sound like a person who’s on TikTok, even if you aren’t.