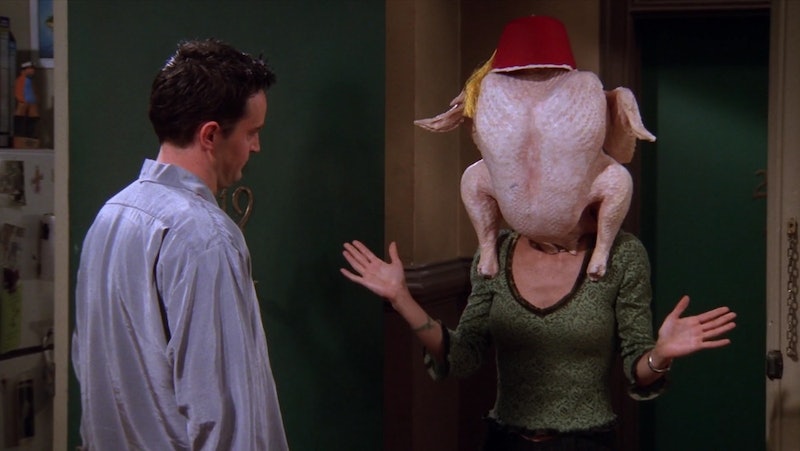 Thanksgiving might be over, but Courteney Cox isn't done talking about her iconic turkey dance from Friends. As longtime fans of the series know, one of the actor's most memorable moments came in a 1998 Thanksgiving episode when she danced with a raw turkey on her head. Fans got a reenactment of that very scene this past Thanksgiving on Cox's Instagram, and now she's returned to the platform to share a behind-the-scenes look at how it all went down.

"Vegan discretion advised," the first frame of the video says. Next, we see Cox — whose head is covered in plastic and towels — trying desperately to squeeze the turkey over her head. "This is really f*cking gross," she says. And as it turns out, trying to maneuver a slimy bird and get it on your head isn't a painless endeavor. "Wait, it really hurts," she continues. "So disgusting ... this hurts like a motherf*cker!"

As you could probably imagine, turkeys do not offer the best ventilation. "Hold on! I can't breathe!" Cox says through laughter. "Who's got the behind the scenes footage?" Fortunately, someone there was recording and the never-before-seen clip is now on the actor's Instagram feed for fans of the series (and of her character Monica) to watch on repeat.

Cox's behind-the-scenes footage comes less than two weeks after the actor posted the initial video on Thursday, Nov. 26. "Happy Thanksgiving everyone, I hope you're having a great day," she said in the clip. "I'm feeling so thankful, and also, if I get one more goddamn GIF with that turkey on my head dancing like a f*cking fool, I'm just gonna snap."

Turns out, there was no need to send around the GIF this year because Cox gave fans new footage to share. "Since I'm the symbol of Thanksgiving, here you go, hope it makes you happy," she wrote before shimmying with the bird on her head to the tune of the Friends theme song.

Of course, Cox's reenactment thrilled fans and celebs alike. "You DID THAT!!" Cox's former co-star Lisa Kudrow wrote in the comments. "Love you sister !" Reese Witherspoon added. David Beckham also chimed in to say what we were all thinking: "OMG this just made my day."

Fans were especially excited to see Cox's video because it came on the heels of Matthew Perry confirming that HBO Max's highly anticipated Friends reunion special would start filming in March 2021. "Friends reunion being rescheduled for the beginning of March," Perry tweeted. "Looks like we have a busy year coming up. And that's the way I like it!"