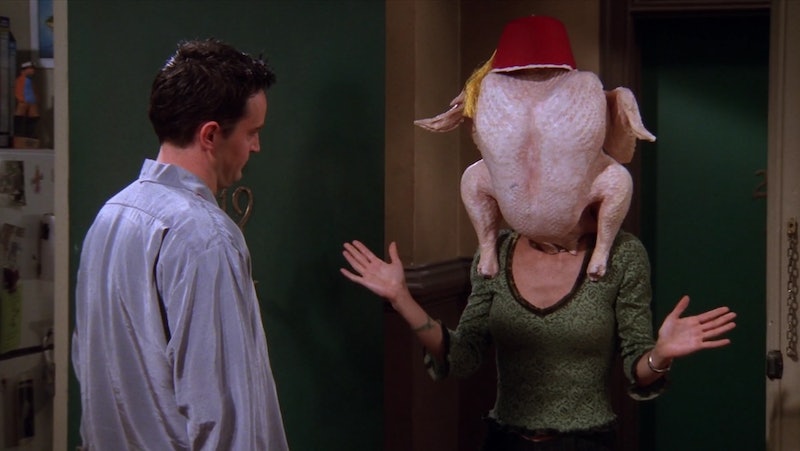 Monica Geller really will always be there for you — even if it means putting a turkey on her head. Courtney Cox recreated the iconic Friends turkey head dance on Instagram, while wishing Friends fans and her followers a happy Thanksgiving on Nov. 26. "Happy Thanksgiving, everyone. I hope you’re having a great day. I’m feeling so thankful," she said with a smile, before the video took a sharp change in tone.

"And also — if I get one more godd*mn GIF of that turkey on my head dancing like a f*cking fool, I’m just gonna snap," she said, zooming in close for the full effect. Thankfully, it seems like Cox doesn't really mind being "the symbol of Thanksgiving" too much, as she then gave her followers a gift for the holiday season. "Here you go. Hope it makes you happy," she said before putting a sunglasses-wearing turkey on her head, and doing Monica's famous shimmy for the camera.

Now, thanks to Cox, Friends fans have a brand new video to send one another every November to celebrate the holiday in style. While the beloved sitcom was renowned for its annual Thanksgiving episodes, the moment where Monica put the turkey on her head in Season 5 to apologize to Chandler (Matthew Perry) for inadvertently cutting off his toe remains the show's most iconic. After all, how many other TV turkey mishaps end with a profession of love?

Cox's Instagram video will likely help tide Friends fans over as they continue to wait for the frequently-postponed HBO Max cast reunion. Though it was originally scheduled to begin filming in August, the reunion was pushed to 2021 due to concerns over the ongoing coronavirus pandemic; according to The Hollywood Reporter, all six cast members — Cox, Perry, Jennifer Aniston, Matt LeBlanc, Lisa Kudrow and David Schwimmer — want to film on the show's original set with a live studio audience, which has complicated things.

However, in November, the outlet confirmed that fans can likely expect the reunion to air in the spring of 2021. Around the same time, Perry revealed that the Friends reunion is scheduled to start filming in March, which lines up with HBO Max's plans for a spring premiere. "Friends reunion being scheduled for the beginning of March," the actor wrote on Twitter on Nov. 12. "Looks like we have a busy year coming up. And that's the way I like it!"

Despite the numerous delays that fans have had to endure, several cast members have promised that the reunion will be worth the wait. "It's going to be super," Aniston told Deadline in August. "This has also given us more time to make it even more exciting and more fun than it would have been. So I choose to see it as the glass is half-full that it got postponed. ... Look, we’re not going anywhere. You’re never going to get rid of Friends, sorry. You're suck with us for life guys."

The frequent delays have been difficult for the cast as well, as it has been over a decade since the six of them were on set together. "I guess what I'm honestly most looking forward to is just being in the room with those other five actors," Schwimmer told E! News in July about the reunion. "Being on the actual sounds stage on the actual set for the first time in 10 years, the set that we shot on for 10 years, that to me is going to be a really meaningful experience."