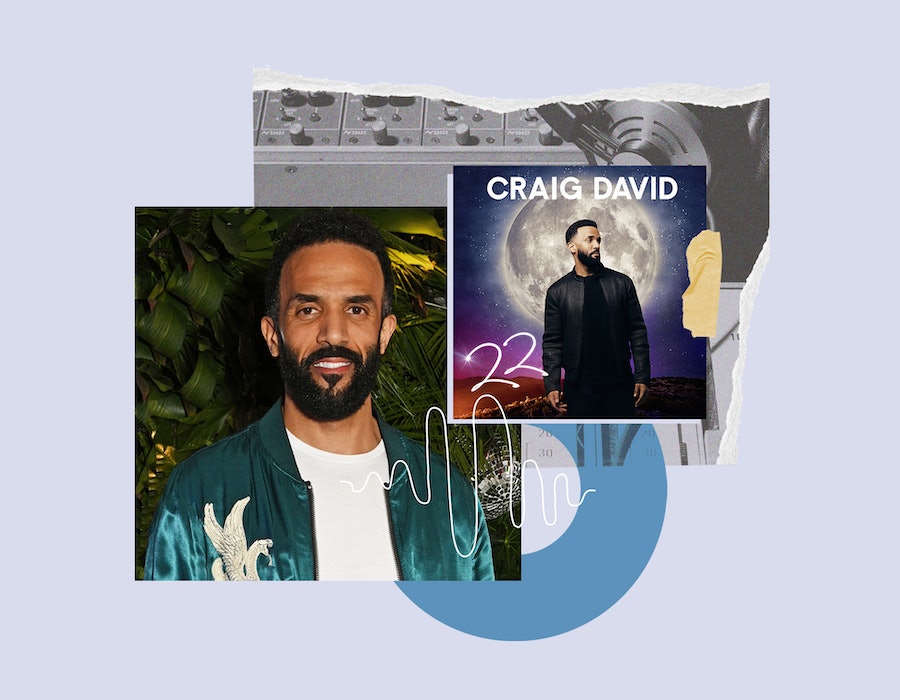 It’s been 22 years since Craig David made his mark on the music scene with his debut album Born To Do It. A formative body of work for both David and his fans, the record proved to be a cultural moment, delivering hits such as “Fill Me In" and “7 Days.” Chances are, you’re probably now humming one of those songs in your head. And that’s the lasting power of the music. For David, he knew he was on to something special even before it topped the UK charts. “I remember walking home from Ocean Village, where we recorded the album, which was five minutes away from the council estate I grew up on,” the Southampton-born singer tells me. “I had my Sony Walkman, with my headphones on, pushing down the ‘boost button’ to make the bass on ‘Rewind’ even louder. I thought, ‘Life is good.’”

In a homecoming of sorts, David kicks off his new album, 22, with a nod to the beginning of his career. The first track, “Teardrops,” features the famous intro sound from the 1999 Artful Dodger ft. Craig David “Re-Rewind” track, which introduced the then-teenage singer to the public. “I always go back to Born To Do It, because I was a child when I made it, and I felt like I went back into that childlike place for 22,” the musician explains. David has fully embraced his R&B sound this time around — something that came naturally to both him and Mike Brainchild, who produced most of the album. “I gravitate towards R&B. It just feels there’s more scope in the tempos to express the lyrics and the melodies allow for lots of different harmonies,” he muses. “We were able to create a proper R&B-based album, and even the more house and garage songs still have a tinge of R&B in there.”

From being nominated for over 14 BRIT Awards to making his mark Stateside with two Grammy nominations, David has experienced major highs in his music career, but that hasn’t come without its struggles. “To the outside world, it may seem like things aren’t connecting the same way they did, you’re not the talk of the town, or the head of the label may not be ringing you back like they used to, but that’s all ego-driven stuff,” he says, reflecting on the quieter periods. “There’s been some hard times along the way, but music has always been my saving grace. When I didn’t have the answers or know what to do, I’d turn to music and it would always bring me back.”

When we catch up, the performer is in the midst of closing out the festival circuit with his DJ set, Craig David Presents TS5. As well as preparing to launch his new album, he’s also gearing up for the release of his first book, What’s Your Vibe? In the same thoughtful tone he has throughout our conversation, David notes: “I’ve landed at a point where both [the album and book] are holding the same signature energetically. There’s a body of work with the music, which I hope people feel, and there’s a book from my heart, which I think will open me up to a whole new lease of life.”

Below, David discusses his creative process, his dream collaboration, and why now is the right time to share his story.

On The Purpose Of 22, Chart Battles With Destiny’s Child, & Doing Authentic Collaborations

I know you’re a big believer of reading energy, so what feeling do you want listeners to take away from your new album?

There are times you want to turn something on and [exhale]. I feel like if it hits right, it’ll touch people’s souls. With 22, I really wanted to make a body of work. I know albums have, in some respects, become a thing of the past. You can have playlists now, where you pick your own songs and create your own album, I get that. But I made sure the record arcs from “Teardrops” all the way to “Yes,” which is on the deluxe version. You get your R&B, garage, and dance tunes, but it’s all positioned right.

Then there’s the symbolism of the number. It’s 22 years since my first album, but if you’re into numerology and angel numbers, 22 is a powerful, “master builder” number. It’s about creating a foundation, bringing people together, and understanding your service.

You’ve mixed Beyoncé’s “Break My Soul” with your own track “Heartline” during recent sets. Is Beyoncé someone you’d like to collaborate with?

Yes to Beyoncé. All day every day. She’s one of the greatest singers out there. I’m grateful I got to see her when she was in Destiny’s Child and her whole come-up. Weirdly enough, “Fill Me In” and “Say My Name” were released at the same time. This was when I was a new kid on the block and “Re-Rewind” was blowing up. We were at number one and two [on the UK charts] throughout the week. I ended up with a number one record, but I was more gassed about the fact that I had a song out the same week as them, and that we were near each other on the charts.

You’ve joined forces with everyone from Galantis to Wretch 32 for this album. How do you approach the collaborations?

Rather than just working with a person because they’ve got good stats or streaming numbers, for me, it’s about the relationship we’re forming. Everyone I’ve worked with on this album, I feel like we’ve got a really good rapport. I can hit them up and we can talk about life and vibe. With Wretch, he’s someone I’ve always had so much love for. I think he’s one of the most talented rappers in the country. He’s conscious and he speaks his truth, and he does it in a way that has swag. Not only is he a good rapper, but he’s also amazing with melodies. He can sing.

How does it feel looking back at your debut album and the relevance it still holds today?

There was something about the timing of everything leading up to that record. Garage music had just blown up, but at the same time, my album wasn’t really a garage album, it was more R&B. It was everything I had listened to growing up. That ‘90s period of Faith Evans, Notorious B.I.G., Tupac, Dru Hill, 112, Whitney Houston… what an era.

It makes me smile that Born To Do It has stood the test of time. A lot of people are searching for an album that will have that moment, and to have it as my first album ever, set the tone for me as a songwriter.

You’re about to share your story in your first book, What’s Your Vibe? What made it the right time for you to open up?

For me, with the memoir thing, it felt as though there are better memoirs out there from other people. I was ready to do a book that had anecdotes and stories, but that also shared some of the life lessons I’ve experienced, some which others might resonate with. That’s really appealing to me. It’s not about chart releases or if something is a bestseller, none of that really matters. But what is it doing to help people? What are you bringing to the world? Within that, I get my uplift.

On What He Does When Inspiration Strikes, Who Would Play Him In A Movie, & The Song He’d Like Fans To Revisit

When you get an idea for a melody, how do you make sure you don’t lose it?

If I’m on a cellphone, it’s definitely a voice note. If I’m in the studio, then it’s the quicker I can get to the microphone and put it down [the better]. Sometimes you listen back and there’s a piece of gold there. For me, melodies are the most fun part of all this. I feel like I’m a channel for whatever is coming through. The choice of notes that I go to is not me, it comes from a higher source. This album has got a lot of that. Lockdown gave me space. Everything wasn’t so urgent. Without the urgency, it allowed creativity to come through.

If you were in charge of the casting, who would play you in a musical biopic of your life?

The guy that plays Luke in The Handmaid’s Tale [O-T Fagbenle]. He would be really cool. When he was in the Marvel movie Black Widow with Scarlett Johansson, I had all these phone calls saying, “You did that part in the Marvel movie? That’s amazing!” I was like, “What?” [Laughs]

Is there a song of yours, one that perhaps isn’t as well known as your others, that you’d like Bustle readers to go and listen to after reading this interview?

My discography’s going through my head. It’s a Filofax right now [laughs]. I feel like “You Don’t Miss Your Water” would be a nice one. It has the sentiment of not taking the beautiful things around us for granted. I wrote it many, many years ago, but my songs have this arching thing where they teach me things years later.