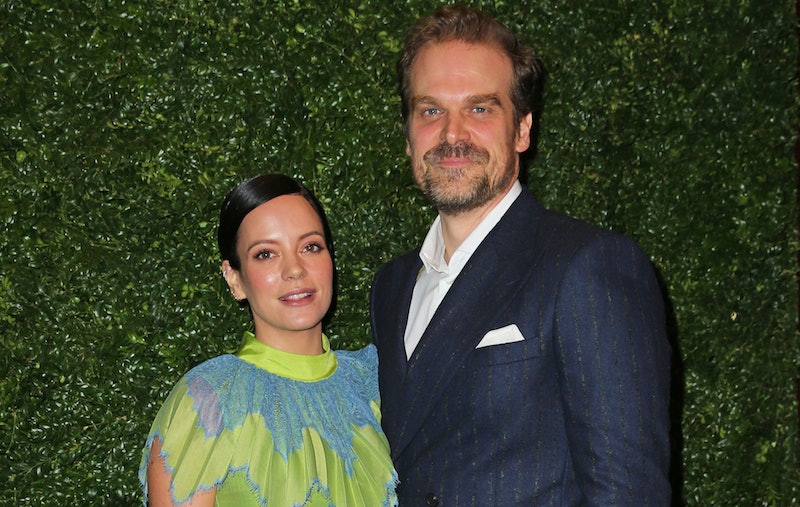 An Elvis impersonator, In-N-Out burgers and fries, and dark, smoky skies from the wildfires in the neighboring states of Oregon and California are just a few of the eccentric components featured in David Harbour and Lily Allen’s wedding photos. Yes, it’s true — everyone’s favorite Stranger Things #zaddy is officially off the market. About three days after TMZ reported that Harbour and Allen obtained a marriage license in Nevada, the two confirmed they exchanged “I do’s” at the Graceland Chapel in Vegas, according to a series of whimsical Instagram photos shared by the newlyweds on Wednesday, Sept. 9.

On his Instagram, Harbour shared two images: one of him carrying his new wife in front of the chapel (Elvis impersonator officiant in tow) and one of the “reception” that followed post-wedding, which consisted of the newlyweds eating In-N-Out burgers alongside Allen’s two daughters from her previous marriage, Marnie Rose Cooper, 7, and Ethel Cooper, 8. On Allen’s Instagram, the singer-songwriter shared more snapshots from the ceremony with a better look at her white Dior dress. In one post, she’s enjoying a burger.

"In a wedding officiated by the king himself, the people’s princess wed her devoted, low born, but kind credit card holder in a beautiful ceremony lit by the ashen skies courtesy of a burning state miles away in the midst of a global pandemic," Harbour captioned his post. "Refreshments were served at a small reception following."

Harbour and Allen have been linked since August 2019. The wedding comes after Allen sparked engagement speculation back in May. The British singer-songwriter shared a mirror selfie of her abs with a diamond ring on her finger. When a follower inquired about the piece of jewelry, Allen evoked Fight Club and responded in the comments, “First rule of engagement club…” While she didn’t mention Harbour specifically, fans interpreted it as confirmation that the two would soon walk down the aisle.

A pandemic wedding set against the backdrop of apocalyptic wildfire skies? Eh, still sounds better than battling Demogorgons at the Starcourt Mall.