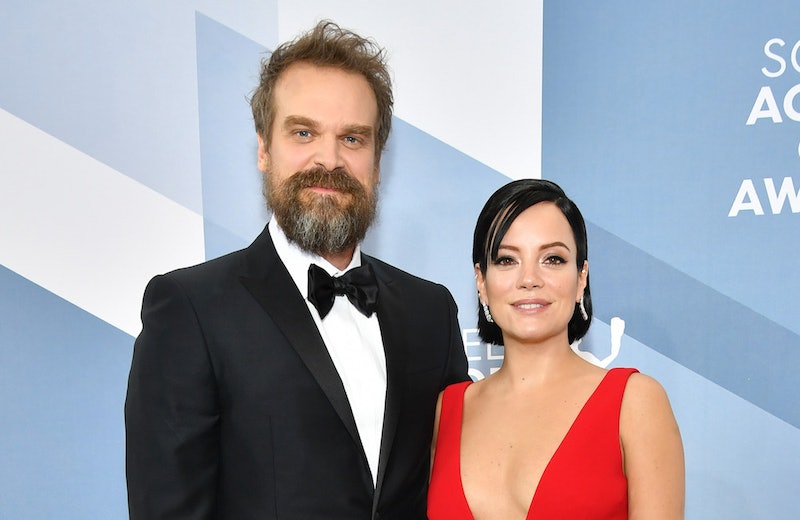 Hopper might be getting hitched. Stranger Things star David Harbour and Lily Allen reportedly obtained a marriage license over the weekend. According to public records obtained by TMZ, the actor and his musician girlfriend procured the marriage license in Las Vegas, Nevada on Sunday, Sept. 6 — which indicates that the two could exchange “I do’s” sometime soon. Bustle has reached out to Harbour’s rep for comment, but did not receive an immediate response.

The marriage license is valid for one year, so they have a little while before making things official. But, at this rate, it looks like Harbour and Allen will be married before Stranger Things comes back for Season 4. After all, things between the couple have moved relatively swiftly. This wedding speculation comes after Allen seemingly confirmed engagement rumors in May. The British singer-songwriter shared a mirror selfie of her abs on Instagram and captioned it, “Daily Mail readers gon say it’s photoshop. I AM RIPPED don’t @ me.” However, it wasn’t her abs that caught the attention of fans, but the diamond ring on her finger. When a follower inquired about the ring, Allen replied, “First rule of engagement club…” Although she did not elaborate much further or mention Harbour, fans took it as a confirmation that the two were getting ready to take the next step.

Harbour and Allen have been linked since August 2019, after the two were spotted out and about in Allen’s hometown of London. A few months later, in October, the couple went public, attending a Saturday Night Live afterparty to celebrate Harbour's hosting gig. The two have reportedly been quarantining together in London along with Allen’s two children, Marnie Rose Cooper, 7, and Ethel Cooper, 8, whom she shares with her ex-husband Sam Cooper.

In April, the two documented Harbour’s birthday festivities with Allen’s two daughters in quarantine on Instagram. Allen shared a close up of a cake, while Harbour shared balloon-filled photos of Allen, Marnie, and Ethel around a table with cupcakes. “To all the friends and fans that reached out with birthday wishes yesterday, thank you, so happy to have so so so so many people out there tracking my race to being infirm and embarrassingly saggy all over,” Harbour wrote. “And to those that didn’t, you’re heartless jerks.” He then urged former Great British Bake Off judge Paul Hollywood to “call [Allen] for baking tips.”

Harbour was previously linked to singer and Fantastic Beasts actor Alison Sudol, but he two split in 2019 after a year together. Allen, meanwhile, split from her ex-husband in 2016 after five years of marriage. There’s no telling when (or if) Harbour and Allen will wed (or perhaps if they’ve already secretly wed in Vegas), but here's to a Demogorgon-free ceremony.