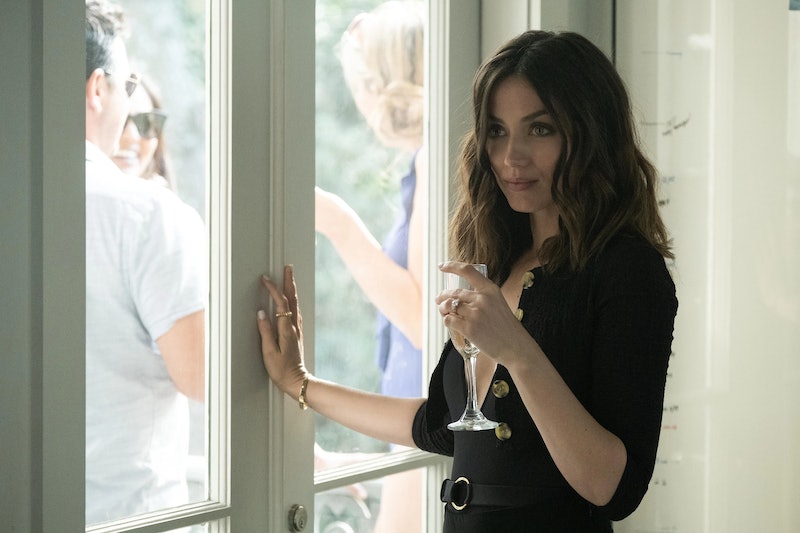 The film is based on a 1957 novel by iconic suspense writer Patricia Highsmith, best known for her Tom Ripley novels and for the lesbian romance The Price of Salt, which was adapted into the film Carol. But Highsmith also wrote about the misery of marriage and the suburbs in novels like Deep Water and Edith’s Diary. In order to understand the tormented relationship at the heart of Highsmith’s Deep Water, it’s necessary to consider its cultural context: an era when divorce was much rarer than it is today, and still considered deeply shameful. In a midcentury setting, Vic’s willingness to allow his wife to pursue affairs outside of their marriage makes more sense than it does in the film, where divorce feels like an obvious option for the unhappy couple.

The film and the novel also diverge in important ways as they reach their dramatic conclusions. Read on to find out more about how the ending of Deep Water compares to that of Highsmith’s book.

How does Deep Water end?

Early on in the film version of Deep Water, Vic tells Melinda’s latest fling, Joel (Brendan Miller), that he killed one of his wife’s former “friends,” a man named Malcolm McRae. The story — which Affleck delivers without a hint of levity — soon circulates through their social set, and though Vic claims he was joking, the audience is left wondering. Later, another “friend” of Melinda’s, Charlie (Jacob Elordi), drowns in a pool after a night of partying — and Vic was the last person who saw him alive.

Finally, the film explicitly shows Vic murder Melinda’s old flame Tony (Finn Wittrock), with whom she’s recently reconnected, in a remote location in the woods. Vic takes Tony’s wallet, drags his body into the nearby gorge, and weighs him down with rocks before returning home. After returning to the gorge for a picnic, though, he spots the body once again: It’s floated back to the surface, and he’ll have to come back to make sure it vanishes for good.

Vic returns the next day on his bike, but doesn’t realize that he’s been followed by the local busybody Don (Tracy Letts), who’s convinced he killed Charlie. After finding Tony’s wallet hidden in Vic’s basement, Melinda called Don and sent him after Vic, and began preparing to leave home with their daughter Trixie (Grace Jenkins).

Don sees Tony’s body and flees to his car. Vic can’t keep up on his bike, so he takes a shortcut through the woods, hoping to catch up to Don. Vic then emerges directly in front of Don, causing Don to veer off the path and into the gorge, taking the secret of Tony’s death with him.

Back at the Melinda and Vic’s home, Trixie drags her mother’s suitcase down the stairs and pushes it in the pool. When Melinda protests, Trixie insists that they aren’t leaving — a declaration that must affect her mother deeply, because the next thing the audience knows, Melinda’s decided to burn Tony’s license and stay with Vic after all.

How does this differ from the end of Patricia Highsmith’s novel?

In Highsmith’s novel, Vic’s murderous tendencies (and possible sociopathy) are revealed earlier — and treated more explicitly — than they are in the film. Vic definitely murders Charlie (here spelled Charley) and manipulates Melinda and Tony by offering Melinda a divorce before killing Tony at the gorge.

Although Vic is more monstrous in the novel, Melinda isn’t exactly more virtuous by comparison: As in the film, she conducts affairs in plain sight, makes her husband sleep in a separate bedroom, and isn’t too interested in their daughter. All that makes it easier for their social set to believe Vic — a likable guy who’s a devoted dad — every time one of her lovers goes missing. Even though Highsmith doesn’t depict Melinda as particularly noble or even sympathetic, she was insightful about how gender dynamics operated in close-knit suburban communities in the 1950s — and often still do today. By sleeping around, Melinda loses the goodwill and trust of her neighbors, even though her husband’s the one who’s literally committing murder.

At the end of the novel, Melinda arranges for Vic and Don to go to the quarry at the same time. In this version of the story, Don doesn’t die, but successfully escapes, which means that Vic’s time as a free man — and, perhaps more importantly, as a respected member of their community — is up. He goes home and kills Melinda just before the police arrive.

More like this
Pamela Anderson’s Dating & Marriage History Could Be Its Own TV Series
By Jake Viswanath
Wait, Is Barney Stinson Related To Sophie On 'HIMYF'?
By Gretchen Smail
Pamela Anderson Is Still A Hopeless Romantic
By Ilana Kaplan
'Knock At The Cabin' May Start Streaming Sooner Than You’d Think
By Jake Viswanath
Get Even More From Bustle — Sign Up For The Newsletter
From hair trends to relationship advice, our daily newsletter has everything you need to sound like a person who’s on TikTok, even if you aren’t.