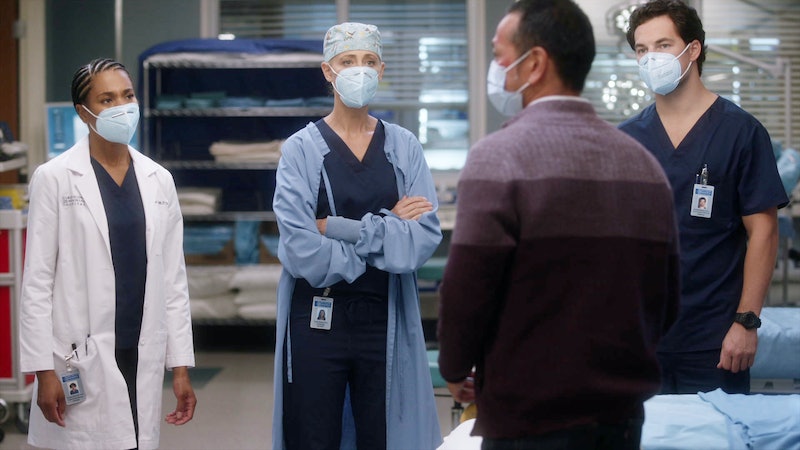 Spoilers ahead for the Grey's Anatomy Season 17 midseason premiere. Grab the resuscitating equipment, because Andrew DeLuca just died on Grey’s Anatomy. After he got stabbed while in pursuit of elusive child trafficker Opal on Station 19, the Grey’s writers did fans no favors by leading them to believe the doctor had pulled through. But if Derek Shepherd and Mark Sloan taught us anything, it’s to never let this show lull you into a false sense of security.

The first sign of trouble came when an unconscious DeLuca joined Meredith on her beach. “Are we alive?” he asked his ex, to which she replied, “I think so. You look good. The beach suits you.” (Side note: Meredith is still alive, though she remains on a ventilator as her battle with COVID continues). He then reflected on the events that had transpired, concluding that putting his life at risk had been worth it. “What I did, following that woman, not letting up, not letting her get away, not letting her harm another single human being, yeah, it was dangerous, but it made sense,” DeLuca explained. “It’s the only thing that made sense. So I don’t regret it.”

In the end, Meredith was the only character who got to give him a proper goodbye. While they both admitted they were unsure what would happen next, DeLuca wanted to let Meredith know he’d never felt seen the way she saw him, never felt inspired the way she inspired him, and wanted to be better than his best self when he was around her. “I’ll miss you,” Meredith said. “If I go back and you don’t, I’ll miss you.” DeLuca promised her she’d be OK, then took off down the beach to be reunited with his late mother. Cue the waterworks.

As fans and cast members alike mourned the loss of DeLuca on social media, actor Giacomo Gianniotti tweeted his own goodbye. “So much I could say... but all that comes to mind is thank you. Thank you to all the fans who loved DeLuca as much as I did,” he wrote. “Telling his story was and will be one of the great honors of my life. Thank you.”

Aside from the police arresting both Opal and the unidentified man who stabbed DeLuca, there is one small piece of comforting news. As Gianniotti teased to Deadline in a (literal) post-mortem interview, fans may not have seen the last of DeLuca. “Over the course of these 17 seasons, we’ve had a lot of characters leave, whether their character exited for some reason or whether they died on the show, and we continue to see those people,” he hinted. “Just because DeLuca has died, it doesn’t mean that there’s not other ways for us to see clips and other manifestations of DeLuca in the future. So, yeah, I definitely think there’s a possibility to see DeLuca in the rest of the season.”

In a separate Deadline interview, showrunner Krista Vernoff put it more bluntly: “You will see him again. He does appear in more episodes this season, but I don’t want to spoil what those are.”

More like this
What Jen Shah's Delayed Sentencing Could Mean For The 'RHOSLC' Season 3 Reunion
By Brad Witter and Jake Viswanath
'Bridgerton' S3 Teases Exciting Social Season For Penelope Featherington
By Bustle
The First Trailer For 'That '90s Show' Includes So Many Nods To The Original Series
By Jack Irvin, Alyssa Lapid and Grace Wehniainen
You Definitely Know The Voice Of Shuri's AI In 'Black Panther: Wakanda Forever'
By Brad Witter
Get Even More From Bustle — Sign Up For The Newsletter