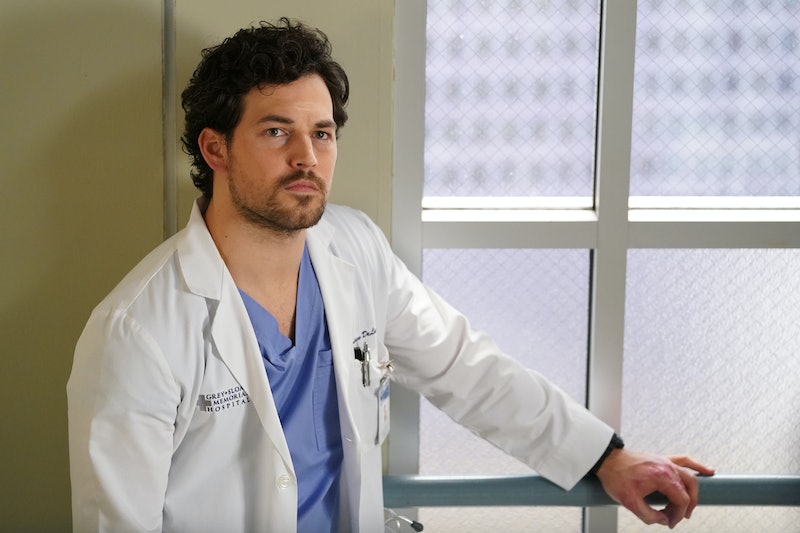 Spoilers ahead for Grey's Anatomy Season 16. As musicians such as The Fray and Ingrid Michaelson have proven over the past decade and a half, the Grey's Anatomy soundtrack is as vital to the narrative as its sometimes-outlandish storylines. With concerns over DeLuca's mental health on Grey's' March 19 episode reaching a fever pitch, fans wouldn't be wrong to wonder if it was purely coincidental that the song playing in the final scene of "A Little Bit" was Maggie Koerner's "If I Die." As DeLuca sped off on a motorcycle — literally at 100 miles per hour — the repetition of the lyric "If I die... If I die..." was more than enough to make viewers worry about the surgeon's fate.

First thing's first: If DeLuca doesn't crash and burn, all of Grey Sloan Memorial owes him a major apology. From the jump, he was the only one to pick up on the signs that his teen patient fit the profile of a human trafficking victim. The girl's aunt (or, more likely, "aunt") wouldn't let her niece speak for herself, let alone anywhere out of her sight. "Teenagers are moody," one naysaying nurse gave as an excuse. After momentarily humoring him, even Bailey dismissed DeLuca's concerns, apparently discounting his judgement based on some earlier questions over his mental state.

Honestly, DeLuca had no choice but to go rogue. So when a Code Violet ("It means somebody's getting violent with hospital staff," Meredith explained) was called during pro bono surgery day, it came as little surprise that the standoff (though entirely nonviolent) involved him attempting to protect his patient from her super-shady guardian. "This man is crazy!" screamed "Aunt" Opal.

Hers seemed to be the popular opinion. Instead of supporting their friend, coworker, and, in Carina's case, brother, the Grey Sloan staff joined hands and formed a chain around DeLuca, marking him the "dangerous person" in the scenario. "Open your eyes, people," he pleaded. "You're all blind."

It turned out he was right. Because his fellow docs were so quick to assume he was suffering some sort of psychotic break, they paved the way for the likely human trafficker to stroll right out of the hospital — unimpeded — with her clutches firmly on her young victim.

So, yeah, of course DeLuca quit his job. As he explained to Meredith, all he ever wanted to do was "accomplish the impossible" and "make a difference" in people's lives. "The more I do that, the more you all just judge me and call me crazy, and I'm not," he said. "I'm sick of it, and I'm done." Naturally, his ex eventually talked him into taking a suspension instead, promising him that Bailey (who insisted DeLuca "needs help") would call the National Human Trafficking Hotline to investigate the girl and her aunt. That effort seemingly came too little too late, however.

OK, to be fair, DeLuca could've been correct about the human trafficker while simultaneously exhibiting signs of bipolar disorder, which Meredith and Carina have both feared he was developing. After all, DeLuca's surgeon father Vincenzo had been responsible for multiple patient fatalities while operating during a manic episode in his native Italy years ago. And, in real life, bipolar disorder is "more common in people who have a first-degree relative, such as a sibling or parent, with the condition," according to the Mayo Clinic.

DeLuca didn't exactly help his case either with that whole taking the highway to the danger zone on his motorcycle, given that a tendency to engage in impulsive or risky behaviors is a hallmark of bipolar disorder. Whatever the character's motivation was for the foolish act, viewers are absolutely right to be worried. DeLuca obviously has some demons he needs to confront, and nothing positive could possibly come from a high-speed motorcycle ride into the darkness.

Will DeLuca crash his bike? Maybe. The screen faded to black before the credits rolled — without showing a preview for next week's Grey's episode. (A sneak peek on the ABC medical drama's Twitter account only showed Maggie meeting a new man at a conference out of town.) But will he be the next cast member to be killed off? Unlikely. Fans just said goodbye to Alex Karev, and it would be extreme, even by Grey's standards, as a possible way into Meredith and McWidow becoming a couple.

Regardless, it seems DeLuca will be peacing out for a bit. The best-case scenario is that he will use his time on suspension from Grey Sloan to seek help for his mental health. Depending on that timetable, however, fans may be waiting for quite a while to see how his storyline shakes out, given that Grey's has suspended production in the wake of the novel coronavirus pandemic.

As Meredith told DeLuca in the Grey Sloan stairwell, however, "This is not how this ends." Or at least we all can hope anyway.