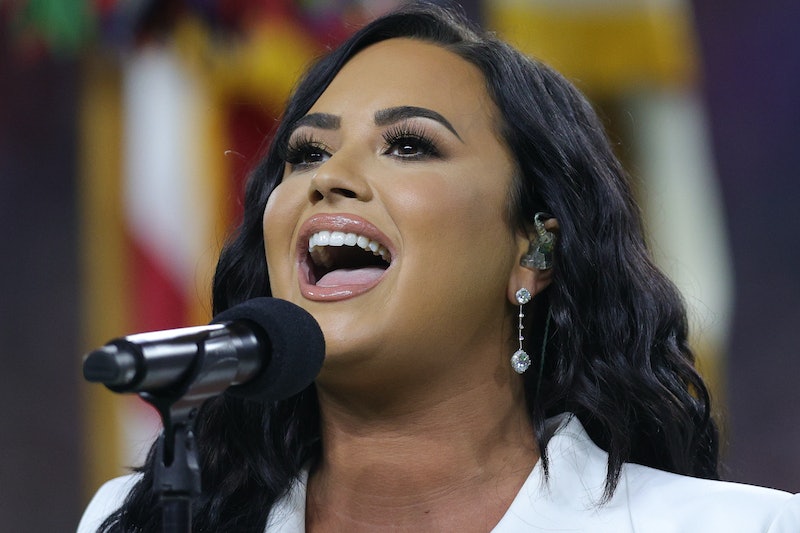 Demi Lovato has always been one to speak her mind, and she's not afraid to call anyone out if she feels they'e done her wrong. In her new single, "Commander In Chief," Lovato directly calls out Donald Trump for his handling of COVID-19. And she's not letting any trolls tell her a pop star should stay out of politics.

The new song, released on Wednesday, Oct. 14, was produced by Finneas and co-written by Julia Michaels, Justin Tranter, and Lovato herself, goes after Trump for his selfish actions during his four-year presidency. "We're in a state of crisis, people are dying while you line your pockets deep," she sings on the somber piano ballad. "Commander in Chief, how does it feel to still be able to breathe?" Elsewhere, she calls out his disregard for the wildfires devastating the West Coast, singing, "But you can't get enough of shuttin' down systems for personal gain, fightin' fires with flyers and prayin' for rain."

After the song was released, Lovato explained that it was her way of addressing Trump and holding him accountable publicly. "There's been so many times that I've wanted to write the President a letter or sit down with him and ask him these questions," she said in an interview with CNN. "And then I thought, I don't really actually want to do that and I thought one way that I could do that is writing a song and releasing it for the whole world to hear and then he has to answer those questions to everyone and not just me."

While most of her Lovatics appreciated that she was speaking out against the president, some of her Instagram followers also expressed disappointment that she got political. (These followers may have forgotten that, four years ago, the singer actively campaigned for Hillary Clinton.) Lovato responded to one naysayer, making it clear that she won't be silenced. "I literally don't care if this ruins my career," she wrote in her comments. "As much as I would like to be sad that I disappointed you, I'm too busy being bummed that you expect me, a queer Hispanic woman, to silence my views/beliefs in order to please my audience. I.e. your family."

Lovato expanded on her stance to CNN, remarking that celebrities are "damned if you do, damned if you don't" when it comes to voicing their political opinions, and naming Taylor Swift as an example. "For years she got trashed because she wasn't taking a stance and wasn't standing up for these rights and she kind of took a back seat," she explained. "Now she's become very political and there are people that are unhappy with that too... You have to live what feels authentic to you. To me, that's using my platform to speak out about the things that I see that are wrong."

Overall, she said her goals with releasing "Commander In Chief" were simply to motivate people to vote, saying, "It's so important that our voices are heard," and to make Trump respond to genuine concerns about how he governs the country. "Bring it on," she said about any potential controversy or presidential tweets. "Prove to them you're exactly who I said you are in the song. Just do it, go for it."