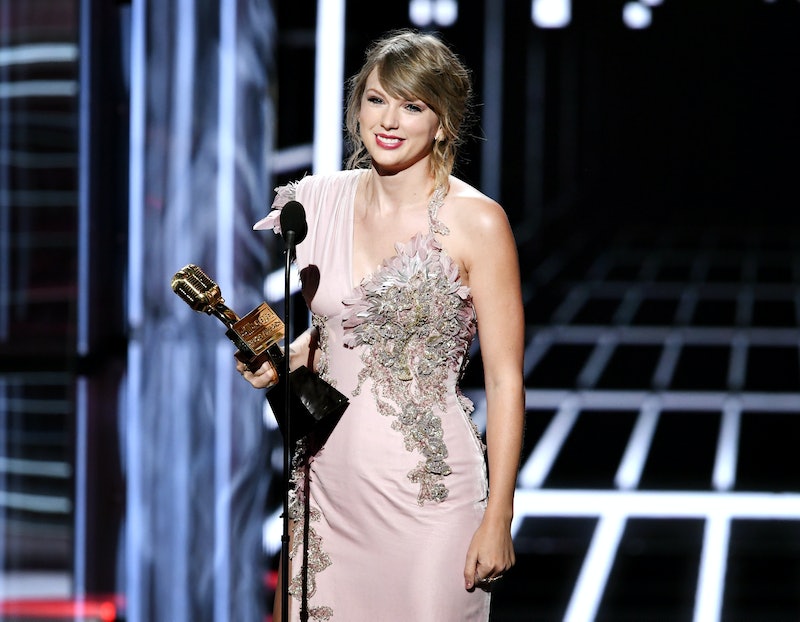 She's been careful to keep her opinions to herself throughout her career, but now, the current urgency and state of politics has pushed her to speak out. Taylor Swift posted about politics for the first time ever, and she's coming in with a roar. The pop star posted to social media on Sunday, urging her fan base to vote in the November midterm elections.

"I’m writing this post about the upcoming midterm elections on November 6th, in which I’ll be voting in the state of Tennessee. In the past I’ve been reluctant to publicly voice my political opinions, but due to several events in my life and in the world in the past two years, I feel very differently about that now," Swift wrote in her Instagram caption.

Swift, who moved to Nashville, Tennessee as a teen, continued on, writing about LGBTQ advocacy, "I always have and always will cast my vote based on which candidate will protect and fight for the human rights I believe we all deserve in this country. I believe in the fight for LGBTQ rights, and that any form of discrimination based on sexual orientation or gender is WRONG."

The singer also revealed her thoughts on her inability to support Tennessee Rep. Marsha Blackburn because of her voting record. Instead, Swift wrote, she is planning on voting for the Democrat running for U.S. Senate in Tennessee, Phil Bredesen, and Jim Cooper for House of Representatives.

According to The Hill, the Cook Political Report rates the race between Bredesen and Blackburn as a “toss-up.” One poll showed Blackburn ahead of Bredesen by 5 points. The two candidates are squaring off to replace Sen. Bob Corker (R), who is retiring.

Swift was especially vocal against Blackburn's record and listed out what she found unacceptable about the ways the current congresswoman has voted in the past. Swift stressed that Blackburn voted against equal pay for women as well as the reauthorization of the Violence Against Women Act, which was enacted in 1994 and reauthorized ever since. The act addresses sexual assault, domestic and dating violence, and stalking by mainly giving grants and support to advocacy groups as well as law enforcement programs, CNN noted. Swift also wrote that Blackburn believes businesses should have a right to refuse service to gay couples and that these couples should not have the right to marry.

"These are not MY Tennessee values," the 28-year-old artist wrote of Rep. Blackburn's record.

Bredesen acknowledged Swift's post on Sunday and responded, thanking her for the public show of support.

"Thank you for the kind words," Bredesen wrote on Twitter. "I’m honored to have your support and that of so many Tennesseans who are ready to put aside the partisan shouting and get things done. We’re ready for it."

Swift ended her post with a call to action, especially among the youngest generation, who make up a sizable portion of her fan base.

"So many intelligent, thoughtful, self-possessed people have turned 18 in the past two years and now have the right and privilege to make their vote count," Swift finished. "But first you need to register, which is quick and easy to do."

The last day to register to vote is Oct. 9. Election day is on Nov. 6.

More like this
Michelle Obama & Taylor Swift React To The Supreme Court Overturning Roe v. Wade
By K.W. Colyard
Taylor Swift Fans Caught A Possible ‘1989’ Clue In Her Latest Awards Show Speech
By Grace Wehniainen
Sadie Sink Would Escape Vecna From 'Stranger Things' With This Taylor Swift Song
By Grace Wehniainen
Police Shove 'Full House' Star Jodie Sweetin At An Abortion Rights Protest
By Radhika Menon
Get Even More From Bustle — Sign Up For The Newsletter