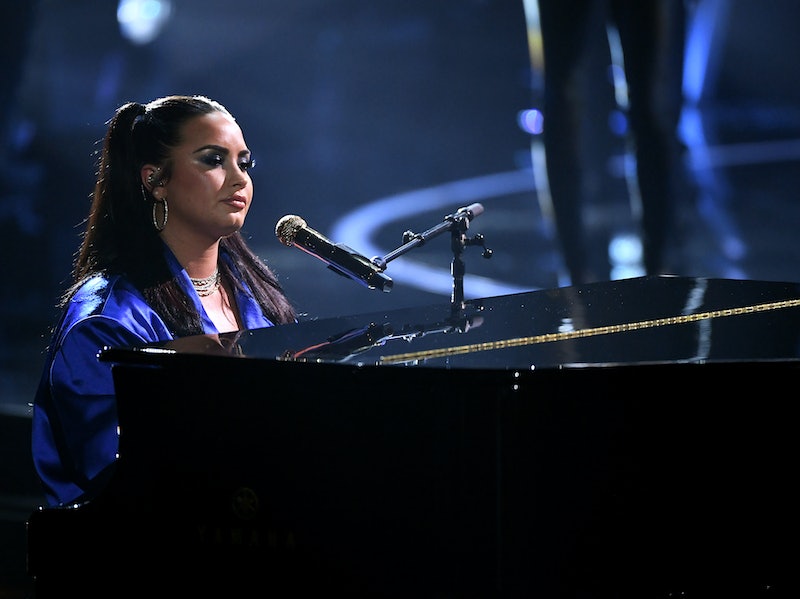 Demi Lovato went after the current commander-in-chief, Donald Trump, in her song of the same name before the 2020 presidential election. Now, she just helped ring in the next administration. Lovato performed on Joe Biden's inauguration day, as announced on Wednesday, Jan. 13. But rather than premiere a new political protest song, which she teased on Twitter following Trump supporters' Jan. 6 attack on the U.S. Capitol, she kept things more positive, opting for a groovy cover of Bill Withers’ “Lovely Day.”

Lovato performed from Los Angeles with a Zoom background of the LA skyline behind her (which made her look like a top-tier weather person). The singer was backed up by citizens and healthcare workers around the U.S., as well as some famous faces, including Lin-Manuel Miranda. However, it was the President and his family who stole the show. Biden was shown watching Lovato's performance from the comfort of the Oval Office, holding his grandson Beau in his arms and seemingly having the time of his life. Beau even waved to the TV at one point, and it was just too wholesome for Twitter to handle.

Lovato shared the performance news on Twitter, confirming she would be part of the "Celebrating America" TV special to commemorate Biden and Vice President-elect Kamala Harris' achievement. "I’m SO honored to announce that I will be joining @JoeBiden & @KamalaHarris for their special event, “Celebrating America” on January 20th at 8:30pm ET/PT," she wrote, adding that she was "speechless when I was asked to perform!" The special was hosted by Tom Hanks and also featured performances from Justin Timberlake, Katy Perry, and Jon Bon Jovi, among others.

Lovato has been vocal about her political views, strongly criticizing Trump throughout his term. In October, she released "Commander In Chief," a politically charged ballad in which she goes after Trump for his actions, especially regarding the coronavirus pandemic. Following the Capitol riots in January, the singer took to Twitter to voice her disbelief and disapproval. "My heart is broken," she wrote. "It makes me to sad to believe how naive I was to think this couldn’t possibly happen, and yet it did. Here we are."

In her following tweet, she hinted that the riots inspired her to create another political anthem, and she's holding nothing back. "THIS IS WHY I POST AS MUCH AS I DO. THIS IS WHY I CARE. THIS CANNOT HAPPEN ANY F*CKING MORE," she wrote. "I’m angry, embarrassed and ashamed. I’m in the studio working on something special after today’s assault on democracy." Lovato has not confirmed whether she will premiere a new song or do something entirely different at the inauguration.

Potential new music and performance for the incoming president isn't the only thing she has up her sleeve this year. Just moments after confirming her inauguration act, Lovato announced that her highly-anticipated docuseries Demi Lovato: Dancing With the Devil will stream on YouTube starting March 23. Perhaps she'll even use the new project to get even more political.

This article was originally published on Jan. 13, 2021