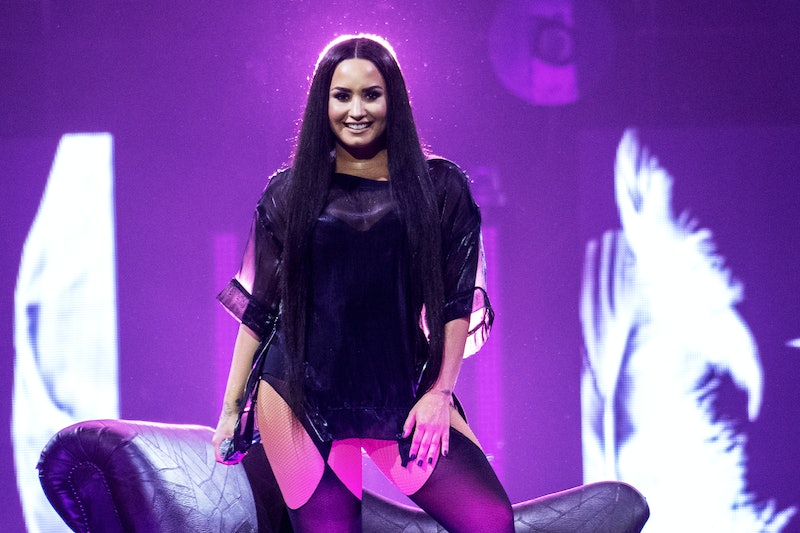 Sarah Michelle Gellar and Selma Blair's iconic onscreen kiss made an impression on '90s kids everywhere — and Demi Lovato is no exception. While chatting with her Coming Out 2020 co-host Tan France about their sexual awakenings, Demi Lovato revealed that watching Cruel Intentions helped her realize she was queer after she watched the movie during a formative time in her life.

Lovato — who has previously described her sexuality as "very fluid" — shared the story with France as part of the Facebook Watch special, which premieres Oct. 9 in honor of National Coming Out Day. "It was definitely when I was young and should not have been watching Cruel Intentions," she admitted, before explaining that when she saw Gellar and Blair's characters kiss in Central Park in the 1999 film, "I was just like, 'Oh, wait a minute. I really like that.' I was like, 'I want to try it!'"

But while Cruel Intentions may have inspired Lovato to question her sexuality at a young age, she added that it wasn't until she got older and dated a woman that she was certain about her orientation. "And then, when I was like, 17, I did get down with that, and that's when I knew," she said.

Though she has shied away from explicitly labeling her sexuality over the years, Lovato has been open about her "fluid" attractions since she released "Cool For the Summer" back in 2015. "I am not confirming and I'm definitely not denying. All of my songs are based off of personal experiences. I don't think there's anything wrong with experimentation at all," she said Alan Carr: Chatty Man, when the British TV host asked her about lyrics like "got a taste for the cherry" and "I'm a little curious too."

In a 2018 cover story for InStyle, Lovato clarified things a little more, explaining that she sees herself as "very fluid." She continued, "I think love is love. You can find it in any gender. I like the freedom of being able to flirt with whoever I want." And Lovato isn't limiting her options. As she explained in an interview with Andy Cohen a few years later, she's is open to starting a family with either a man or a woman. "I don’t know what my future looks like," she said "I don’t know if I’m going to have kids this year or in 10 years. I don’t know if I’m going to do it with a partner or without."

Though she's comfortable with talking about her sexuality, Lovato doesn't want her orientation to become the only thing that her fans or the media focus on going forward. "I feel like it's irrelevant to what my music is all about," she told Pridesource in 2017. "I stand up for the things that I believe in and the things that I'm passionate about, but I like to keep my personal life as private as possible when it comes to dating and sexuality and all that stuff just because it has nothing to do with my music."

More like this
"Lavender Haze" Star Laith Ashley Breaks Down Filming With Taylor Swift
By Jake Viswanath
Jameela Jamil Defends Sam Smith After Trolls Body-Shamed Them
By Jake Viswanath
Linda Ronstadt’s “Long Long Time” Plays A Pivotal Role In The Last Of Us
By Brad Witter
Adam Lambert Called Out The George Michael Biopic Over Potential Casting
By Sam Ramsden
Get Even More From Bustle — Sign Up For The Newsletter
From hair trends to relationship advice, our daily newsletter has everything you need to sound like a person who’s on TikTok, even if you aren’t.