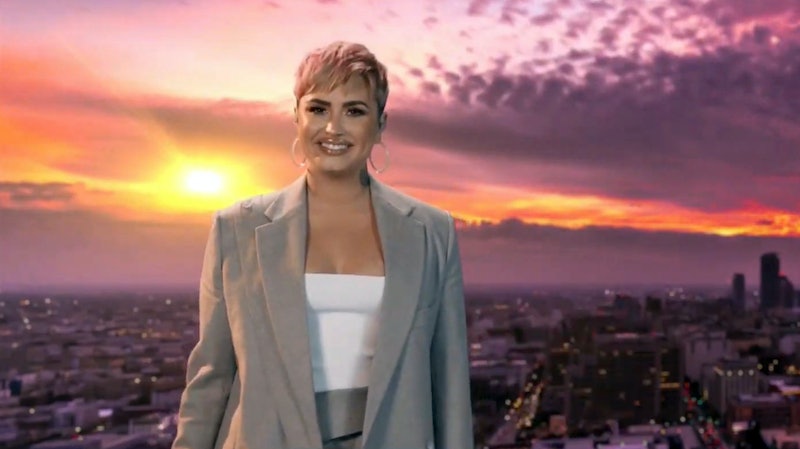 Confirming the news to fans on her Instagram story, Demi Lovato is set to star in a brand new NBC comedy titled Hunger. Written by Suzanne Martin (Will & Grace, Frasier), the singer will also be an executive producer on the series. So, here’s everything we know about Demi Lovato’s role in NBC comedy Hunger.

Hunger follows a group of friends, who all attend a food issues group, as they look for love and success. Lovato has been very open about her struggles with an eating disorder, and her recovery. “I honestly think that’s kind of what led to everything happening over the past years,” she told Ashley Graham on the Pretty Big Deal podcast. “Just like me thinking I found recovery when I didn’t, and then living this kind of lie trying to tell the world I was happy with myself when I wasn’t.”

So far, Lovato is the only cast member confirmed to be in the series, and she will also serve as an executive producer alongside Will & Grace star Sean Hayes. Lovato has starred in multiple TV shows throughout her career, including a recurring role in Will & Grace’s revival series, a lead role in Disney’s Sonny with a Chance, and guest roles on From Dusk Till Dawn: The Series, Glee, and Grey’s Anatomy.

As Hunger is in the early stages of development, there’s no set premiere date. It’s also not clear whether the series will go further than a pilot, as NBC currently only has a “put pilot commitment” with the show. According to entertainment industry site Backstage, this means NBC agreed “to produce and air the pilot episode”, and will pay a “substantial penalty” if it decides not to air it. A “put pilot order generally means that a network feels confident, based on the auspices, that a pilot will receive a series pickup,” the site writes. “But not so confident that it gives the project a straight to series order.”

While a full series of Hunger is yet to be confirmed, Lovato’s upcoming docuseries is. Titled Dancing with the Devil, the YouTube Original covers her near-fatal overdose in 2018, and will premiere on the singer’s channel on March 23. “It’s been two years since I came face-to-face with the darkest point in my life, and now I’m ready to share my story with the world,” Lovato said in a press release obtained by Bustle. The series follows on from her 2017 documentary Simply Complicated and has been in production since her Tell Me You Love Me world tour in 2018.

More like this
Everything To Know About The 'Daisy Jones & The Six' TV Series
By Maxine Harrison and Brad Witter
Turns Out George Clooney Is A Huge Fan Of This Classic British Game Show
By El Hunt
Michaela Coel Has Some *Thoughts* About The Nepo Baby Discourse
By Maxine Harrison
Twitter Is Burning As Phoebe Dynevor Reveals Daphne’s 'Bridgerton' Exit
By Sophie McEvoy
Get The Very Best Of Bustle/UK
Sign up for Bustle UK's twice-weekly newsletter, featuring the latest must-watch TV, moving personal stories, and expert advice on the hottest viral buys.