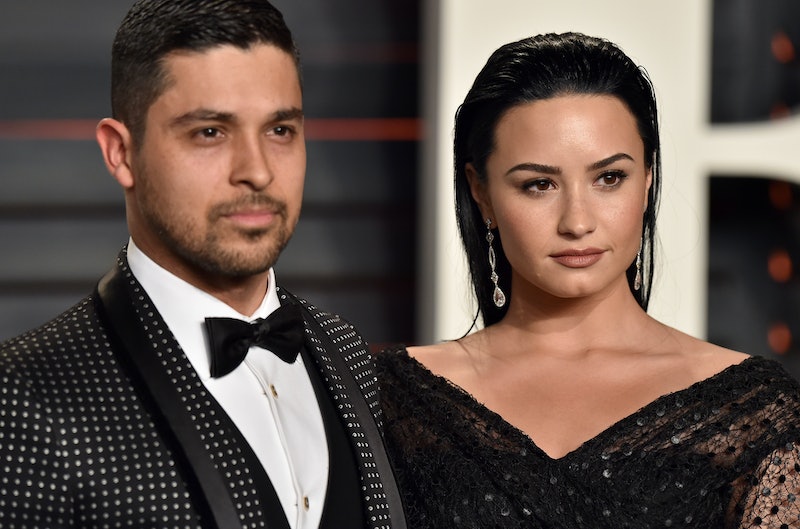 Demi Lovato is holding nothing back on their eighth studio album HOLY FVCK, and nobody is safe — especially their exes. A new snippet of “29” from the upcoming album has gone viral on social media and fans are speculating that the song is about their ex-boyfriend Wilmer Valderrama — or more specifically, the 12-year age gap between the former couple. Bustle has reached out to Lovato’s representatives for comment but did not receive an immediate response.

Lovato fan account @Demi_Artistry posted a TikTok video spelling out the song’s lyrics and using images that draw a comparison to the singer’s relationship with the That ‘70s Show star. “Finally 29 / Funny, just like you were at the time,” Lovato wails on the chorus, nodding to Valderrama’s age when he started dating them. “Thought it was a teenage dream, just a fantasy / But was it yours or was it mine?” Lovato ends the chorus by repeating “17, 29,” adding in their own age when the relationship began.

If it wasn’t clear enough, Lovato only gets more savage on the verse. “Fiber on the vine, too young to drink wine,” Lovato sings. “Far from innocent, what the f*ck's consent? / Numbers told you not to but that didn't stop you.” The full version of “29” is set to be released as part of HOLY FVCK on August 19, which marks Lovato’s 30th birthday, so naturally, they haven’t commented on the song’s inspiration yet.

Lovato was in a relationship with Valderrama for nearly six years before they eventually split in 2016. In their 2017 documentary Demi Lovato: Simply Complicated, the star explained how they got together. “[When] I met him and I laid eyes on him for the first time, I was in hair and makeup and he came in and sat down and I was like, ‘I love this man’ and ‘I have to have him,’” she recalled. “But I was only 17, so he was like, ‘Get away from me.’ After I turned 18, we began dating. I think it was love at first sight, and I don't really believe in that, but I believe that it happened.”

Lovato went on to say they’d “never loved anybody like I loved Wilmer,” and explained why they eventually broke up. “We connected on a level that I've never connected with anybody before,” Lovato said. “He was just my rock. My everything. It had nothing to do with falling out of love. We decided together that we're probably just better as friends.”

Despite Lovato seemingly calling him out on their new song, the duo have stayed friendly since their break-up. In January 2021, Valderrama acknowledged his ex on Instagram after their animated film Charming premiered on Netflix, thanking Lovato as part of the “incredible cast,” which also included Ashley Tisdale and Avril Lavigne. “Demi and Wilmer are still in touch,” a source told Entertainment Tonight at the time. “They still love each other as friends and will always be supportive of one another.”