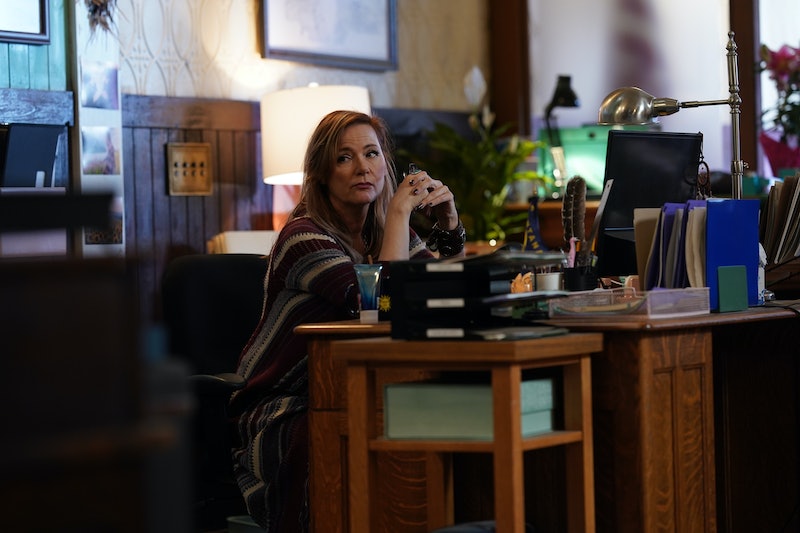 Big Sky fans already know that state trooper Rick Legarski is bad news, but another shady character could be hiding right under our noses. Some people think Denise is acting suspicious, and that she could even be connected to the kidnapping and sex trade business that Rick is in.

As far as we currently know, Denise is just the secretary/receptionist for Cassie and Jenny's private detective agency. But she's also connected to Rick via her cousin, who used to be married to the trooper. Furthermore, Denise has repeatedly jumped to Rick's defense and tried to keep Cassie from looking into him. When Cassie voiced her concerns that Rick was "creepy," Denise was immediately dismissive. "Rick Legarski is as harmless as they come, honey," she tried to assure Cassie. Fortunately, Cassie didn't let her suspicions go, and she even suggested that Rick may have been involved with Grace and Danielle's kidnapping (which he is). "Oh please," Denise scoffed. "Rick Legarski doesn't even have the imagination to be bad ... you're wasting your time."

Why is Denise so protective of her cousin's ex-husband? Reddit user Radiation___Dude thinks it's because she's involved in the sex slave trade operation. The user suggested that Denise was placed at the detective agency as a mole to bring information back to Rick. Reddit user BigfootTheYeti1 also finds it weird that Denise would care so much about defending a man her cousin is no longer even married to. The user suggested that Denise knows what Rick is up to but is purposefully leading Cassie astray.

The book Big Sky is based on — C.J. Box's book The Highway — pokes a few holes in this theory. Though there's nobody in the book named Denise, it seems that she's based on a character named Edna, who's a dispatcher at the Sheriff's Department. In the novel, her sister Sally is the one who was married to Rick. Edna connects Cassie with Sally so that Cassie can get some answers about Rick. When Cassie questions Sally, she's hesitant to say much. But she does eventually help identify Rick in some video footage of a murder. Sally also tells Cassie about land that Rick bought, allowing Cassie to get one step closer to finding him. Both Edna and Sally are indispensable in putting a stop to Rick's behavior.

That being said, the TV show might take a different route. It's already departed in some ways from the book, like by having Rick's ex-wife call him to give him the heads up that Cassie was asking questions. If that's the case, actress DeDee Pfeiffer — who plays Denise — is doing a good job at throwing people off the scent. "My character, Denise, is not big," she said in a November interview with Digital Journal. "She is the voice of reason. Although gossip is her currency, she doesn't use gossip in a negative way, she uses it in a positive way. She has a sense of humor, and she doesn't judge anybody."

Pfeiffer seems to be hyping up Denise's "voice of reason," but we already know that Denise's voice is very wrong about Rick. And though Pfeiffer tried to downplay her role, she also call Denise a "pivotal character" and noted that Denise is in every episode consistently... just like a mole would be if they were keeping tabs on Jenny and Cassie. Perhaps fans are onto something.

More like this
What’s New On Netflix: Ana De Armas’ 'Blonde' & A Nick Kroll Special
By Arya Roshanian
The 'Reasonable Doubt' Cast Includes A 'Save The Last Dance' Reunion
By Grace Wehniainen
Nicola Coughlan Shared A Lady Whistledown Excerpt From ‘Bridgerton’ Season 3
By Grace Wehniainen, Alyssa Lapid and Sam Ramsden
This House of the Dragon Character Will Create Another Scandal For Rhaenyra
By Kadin Burnett
Get Even More From Bustle — Sign Up For The Newsletter