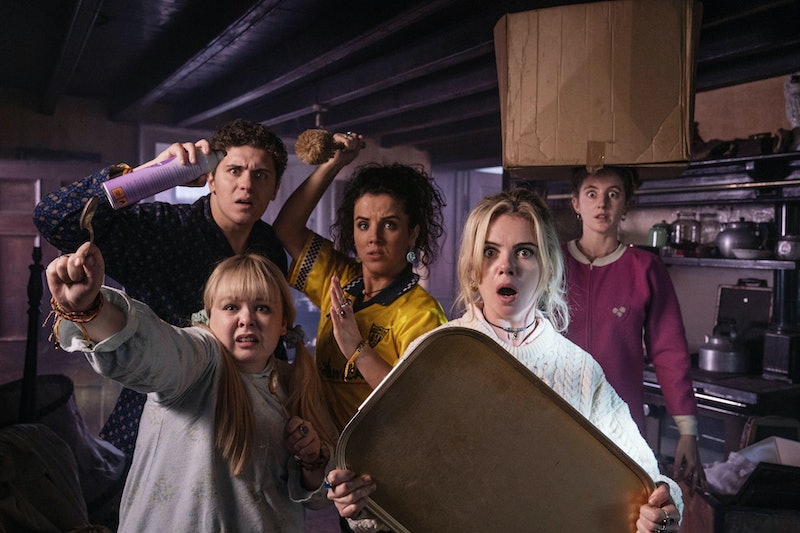 Fans may feel like they’ve been waiting for Derry Girls season three forever. (In part, because we really have.) Due in no short part thanks to endless filming delays caused by lockdown, the show’s return has been pushed back time and time again. But fan favourite Nicola Coughlan previously gave an update that gave us hope. In her season three-affirming tweet, she confirmed filming for the new series had finally come to a close “Goodbye Derry Girls,” she wrote. “It’s been quite a ride.” Furthermore, the first full trailer for the new series finally dropped on March 17, during which it was confirmed Season 3 is “coming soon.” With that said, here’s everything we know so far about Derry Girls season three so far.

Writer Lisa McGee has previously spoken about what we can expect from series three, but it’s a little vague, tbh. Back in 2019, she said that the season will pick up in 1995, and will have a positive undertone as peace and the Good Friday Agreement of 1998 are in sight.

There were also mentions of a budding relationship between James and Erin, and that one of the Derry Girls crew might leave them for “a rival gang,” meaning the season could centre around “how the others try to get them back and deal with that.”

Whatever the specific storylines, it sounds as though there’s going to be lots to get excited about; Nicola Coughlan told the Belfast Telegraph that she had chatted to McGee about the storylines of season three, and that “they’re so brilliant, which doesn’t surprise me.”

Luckily, all of the main cast from previous seasons are thought to be making a return for the third and final one. This includes: Saoirse-Monica Jackson as Erin Quinn, Nicola Coughlan as Clare Devlin, Louisa Harland as Orla McCool, Dylan Llewellyn as James Maguire, Jamie-Lee O’Donnell as Michelle Mallon, and Tara Lynne O’Neill as Ma/Mary, amongst others.

The wait is finally over because Channel 4 has today (Mar. 30) confirmed that the final season of Derry Girls will premiere on Apr. 12 at 9.15 p.m on Channel 4, with episodes to be made available weekly on All 4 following its broadcast.

Filming for the third series was supposed to begin in June 2020, but was delayed for obvious reasons (read: lockdown). However, the beloved cast shared in December 2021 that filming had concluded. Alongside the announcement of the release date, Channel 4 has also released a first look clip ahead of the premiering of the new series.

On Jan. 20, we finally got a teaser trailer to get us all pumped up for the final season that gives us a glimpse of our favourite girl gang getting into their usual trouble. A couple of months later, on St Patrick’s Day 2022, the first official trailer for Derry Girls Season 3 dropped, giving fans their first proper look at the much-anticipated final series.

But it probably wouldn’t hurt to give the first two series a re-watch in the meantime on Netflix, to whet your appetite for upcoming episodes that are coming real soon.

This post will be updated with additional plot and cast details as more information on Derry Girls season three becomes available.

More like this
Everything To Know About The 'Daisy Jones & The Six' TV Series
By Maxine Harrison and Brad Witter
Adam Ali Hopes 'Waterloo Road' Will “Subvert” Queer Misconceptions
By Sam Ramsden
A New Netflix Doc Will Explore The Unsolved Murder Of Jill Dando
By Sam Ramsden
Yes, 'The Price Of Glee' Is Available To Watch In The UK
By Catharina Cheung
Get The Very Best Of Bustle/UK
Sign up for Bustle UK's twice-weekly newsletter, featuring the latest must-watch TV, moving personal stories, and expert advice on the hottest viral buys.

This article was originally published on Dec. 29, 2021