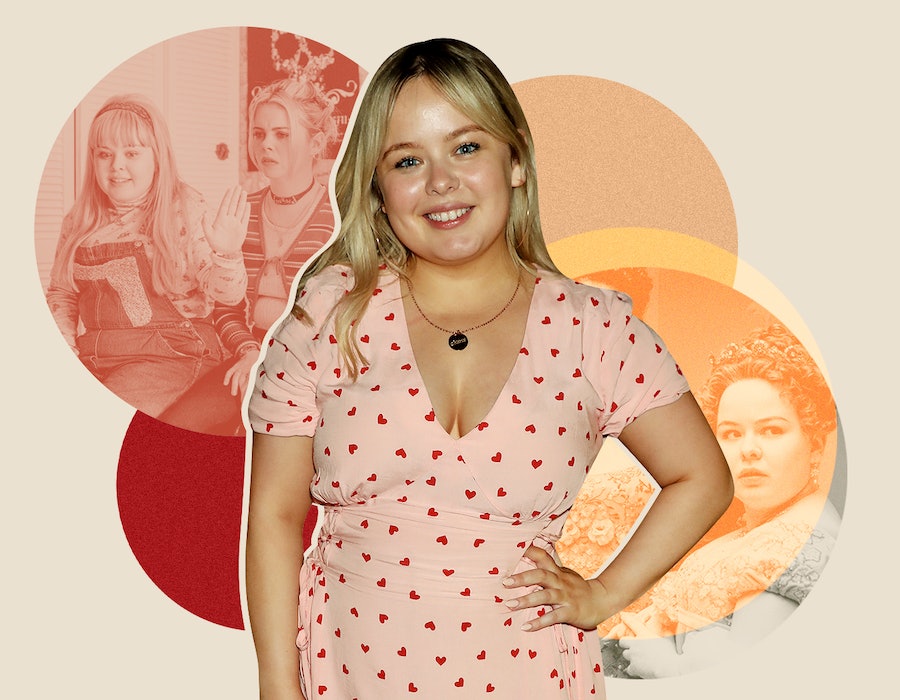 Zooming in from her mum’s back room in Galway, Nicola Coughlan’s laugh and conspiratorial sense of humor reminds me instantly of those fleeting but fabulous new best friends you make in the bathroom queue on a night out. Instant, intimate, and entertaining. Despite it being a virtual meeting — and without the implicit inebriation of a night out — her likability is intoxicating.

Coughlan is, of course, best known for her role in Derry Girls. As “Wee” Clare Devlin, a highly strung teen navigating life in a Troubles-torn Ireland, she never fails to elicit laughter with her perfect timing. Now, she’s swapping her Catholic school girl uniform for Regency ball gowns in Netflix's Bridgerton, the adaptation of Julia Quinn’s romantic historical novels. Described as a 19th century Gossip Girl — with none other than Julie Andrews lending her voice to all-seeing narrator, Lady Whistledown — it is the first Netflix series from Shondaland, the production company founded by Shonda Rhimes of Grey’s Anatomy, Scandal, and How to Get Away With Murder fame. In it, Coughlan plays Penelope Featherington, the youngest daughter of a nouveau-riche family and a reluctant debutante.

“Shondaland is so good at writing complicated women,” says Coughlan, reflecting on a conversation she had with her co-star and new BFF Claudia Jessie, who plays Eloise in Bridgerton. “These girls are really young — they’re being pushed into the adult world but they’re not ready at all. It’s always interesting to map out the differences and the similarities between you and a character. The latter help make them three-dimensional, but the differences are where you get to play around and have a little fun.”

Unlike Penelope’s wallflower and Claire’s neurotic “craic killer” characters, Coughlan is whip smart and witty, and she's looking to expand her repertoire. “I’d love to play someone irredeemably bad,” she admits with a grin. “I love Succession. They’re all so desperately selfish and lacking any self-awareness.” Singing the praises of Bridgerton’s Polly Walker, who plays her rather cruel mother, Coughlan points out that “the nicest people play the baddies best.” If she’s right, Coughlan herself is on track for big — and bad — things.

So what’s the dream role? “Sally Bowles!” she says without hesitation. “But the production would have to be rejigged — more feather boas, faux fur, really decadent. A camp Cabaret, basically.” Can she sing? “I’m not Beyoncé, but I can hold a tune.”

Another talent of Coughlan’s is her mastery of accents. “I didn’t realise but the crew on set for Bridgerton found it hilarious when my Culchie accent would come out whilst wearing these grand costumes with my silk gloves,” she says. In Derry Girls, she delivers a pitch-perfect Northern Irish accent that has been joyfully received by locals, and she is studious in her craft. “Sometimes I watch videos on Instagram with the sound off and try and guess the accent because people move their mouths in different ways,” she shares, shifting effortlessly among aristocratic English, Australian, Northern Irish, and back to her native accent. It’s a skill that aligns her with the likes of Killing Eve's Jodie Comer and Normal People’s Daisy Edgar-Jones. “I saw the series before it came out,” Coughlan says of the Sally Rooney adaptation, “and messaged Daisy and Paul [Mescal] to say ‘I know you don’t know me, but you’ve made something really phenomenal so — strap in!’ I was so thrilled for them.”

For an actor who has her face painted on a giant mural in Derry, whose show took home a BAFTA last year, and who after-parties with Elton John, Coughlan has managed to remain completely down to earth. It's all thanks to her friends and family, she says. The friend she saw most throughout lockdown? Queer Eye’s Jonathan Van Ness, who she became mates with via Instagram. “Basically, I printed his face on a jumper and posted a picture of it,” she laughs. “I just figured if I could take a little bit of his energy onto set with me I would get up and be ready for the day and feel happy even if it was 4 a.m. So I had this hoodie made, and he saw it on Instagram and messaged me like, ‘Girl, I love you!’ and since then we’ve hung out a lot. In lockdown, we did a weekly Zoom quiz with my sister and friend, his aunt and her friend… One week was ‘iconic blondes’ so I went as Dolly Parton.”

JVN was the second person she consulted about her new (very cute) bob, but her sister and “best pal” Clodagh was first. “One of the best things about spending lockdown in Galway is that Clodagh’s down the road,” she explains when I ask her about how she coped with the chaos of 2020. “I gravitate toward people who tell me to pull myself together,” she continues, adding her best friends Camilla and Jack to the list. “They don’t let me away with anything. I need that.”

I ask for her favorite words of wisdom. “My mum said it to me years ago, and it’s from Hamlet: 'To thine own self be true.’ At the end of the day, you have to answer to yourself,” she replies. “Also, it gets bandied around a lot, but not acted on enough: just be kind. We’re all just human beings at the end of the day, the more we can try and understand each other the better off we’ll be.”

Coughlan is definitely one to bring these messages into her day-to-day. On social media, for example, she responds to trolls with the most sensational clapbacks. When one tabloid described one of her outfits as “not the most flattering” last year, she tweeted, “I mean incorrect. I look smokin, sorry bout it,” shutting down their derisive comments, and later raising €5,716 for a children’s hospice by auctioning off the dress in question. In 2018, she penned a poignant article for the Guardian that elicited a sheepish apology from the critic who chose to comment on her appearance rather than her exceptional performance in The Prime of Miss Jean Brodie, describing her as an “overweight little girl.”

She also campaigns publicly for the rights of women and LGBTQ+ communities, including This Is Me in Ireland (run by her friend Noah Halpin) and The Rainbow Project in Northern Ireland. “Playing a gay character in Derry Girls and same-sex marriage being illegal until this year, I wanted to lend my voice. It’s not a cozy issue that’s easy to talk about, but I’ve got friends who have suffered because of legislation like this.”

“It’s easy to remain comfortable in your own ignorance, but I try to keep educating myself,” she continues, citing Reni Eddo-Lodge’s Why I’m No Longer Talking to White People About Race as a pivotal read for her. “This year the Black Lives Matter came into such sharp focus, and I realised how little I knew about Black history in the UK, despite living here since 2008.”

“The diversity of Bridgerton is one of the things I’m most proud of,” she says. “Initially, I was like, ‘Well, colourblind casting is great, right?’ And it is — but through conversations with some of the Black actors on set, I realised it doesn’t really cover it because it erases people’s race, too. The original books were written 20 years ago about white people, and the story is a fantasy — the show is not history as it happens, it’s history as it could have happened, and it’s so much better for it. We had to ask, ‘What can we do to adapt the casting choices?’ So, in Bridgerton, Black people take their place in the highest positions of society — which in reality, didn't happen.”

Beyond the casting, through to the costume, set and overall mood, Bridgerton is far from your usual period drama. “It will look so different from anything you’ve seen before — it’s in technicolor,” Coughlan says. Releasing on Christmas Day in the UK, it’s fitting that she describes the series as being “like a box of Quality Streets.” A visual feast, each episode offers something for everyone — and one is never quite enough. We can’t wait.

Bridgerton will be available on Netflix starting Dec. 25, 2020.