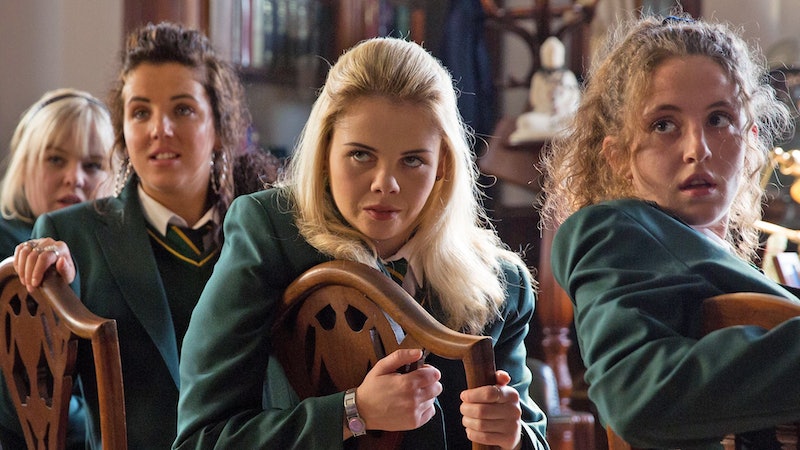 Hit comedy Derry Girls is back for Series 2 and needless to say, it's already bringing the LOLs. This coming of age series explores something few hit coming of age series do — the female experience! Y'all know that you and your girl gang at school got up to all sorts of japes, so a female focussed comedy is spot on, am I right? And real talk, this show is so relatable that you can't help but wonder, is Derry Girls a true story?

Well, kind of. So, the time the show is set in is towards the end of a very well documented time of political unrest in Northern Ireland known as The Troubles. Derry, the city in Northern Ireland where the show is set, suffered from a huge amount of violence between Catholics, Protestants, the PSNI, and the British Army at the time. In what is known to be one of the longest ongoing civil wars in human history.

Speaking to the Irish Times, she said she felt her image of Derry in the '90s was truthful. "It wasn’t even going to be set during the Troubles, really. I just wanted to write about me and my friends, and the way we behaved in school, leave the Troubles out of it. But that didn’t feel truthful either, because I don’t have an experience without it," she explained.

So the setting of the show is absolutely based on truth, and a darker part of Irish history. However, that dark sense of humour translates perfectly to the screen. Especially as it's from the voice of young women, which are among the lesser heard voices from this time. How about the characters though?

McGee certainly based the girls on her own experience of attending school in Derry. So the mindsets, views, and attitudes are very much the same as her and her squad had but the squad itself is fiction. Speaking to Derry Now, she explained that the lead character Erin is a mish mash of the people that shaped her life."She’s the central character who really connects everyone. It's loosely based on me, my family and my friends".

The second season takes place in 1995, straight after the end of the last season. McGee spoke exclusively to Channel 4 about what fans are to expect in the second season. Similarly to the first season, it will cover historical events from the time the show is set.

"Yes, we do the first IRA ceasefire, and then after that Bill Clinton, which happened in 95. Bill Clinton visits Derry, and it's just all the excitement about that, with the president of the USA coming to Derry, and how the family and the girls respond to that".

This show is truthful in many ways and is a really unique telling of Northern Irish history using one of the things its people are well known for — a good sense of humour.

More like this
Nicola Coughlan Just Revived 'Derry Girls' In The Most Unexpected Way
By El Hunt
At 28, Lesley Manville Was Acting, Picketing, & Singing Kate Bush Songs
By Olivia-Anne Cleary
Stephen Graham’s Wife Plays A Vital Role In His Career
By Emma Madden and Sophie McEvoy
Fans Of 'Scenes From A Marriage' Will Be So Into The BBC’s New Drama
By Bustle UK
Get The Very Best Of Bustle/UK