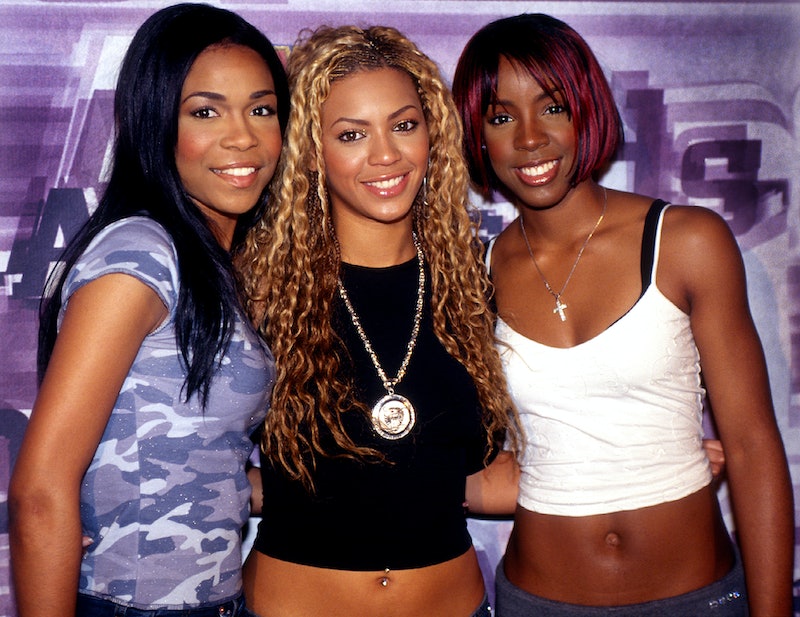 It’s been 15 years since iconic girl group Destiny’s Child disbanded. The trio went their separate ways in 2006, with all three talented performers keeping busy with their own prestigious solo careers. Fans are comforted knowing that Beyoncé, Kelly Rowland and Michelle Williams have all kept close, and from time to time, they hang out with one another. Occasionally, there’s something that really gets the world talking about the possibility of a future where Destiny’s Child has reformed in one fashion or another.

Recently, all-things-music Twitter account Pop Crave shared the mysterious and thrilling observation that for the first time in a while, the group’s Twitter and Facebook header images have been updated. The header image has been changed on each platform to a simple background with their name, and while there is nothing in the post to indicate that more is coming, when it comes to DC, even the tiniest hint can quickly become something far more important.

A quick swap of header images immediately got Destiny’s Child fans talking, with many wondering if something is coming soon from the girl group, whether it be a tour, a song, or perhaps even a full album. Of course, as is typically the case, Beyoncé and company have remained mum on the subject for now, but there is reason to believe the near-future may bring something from the trio, as they have actually worked together fairly regularly since splitting up in 2006.

As a trio, a handful of compilations have come out since Destiny’s Child split, but for the most part, fans didn’t flock to the titles, as there wasn’t much (if any) never-before-consumed content featured on them. In fact, chances are the three artists didn’t have much to say when it came to those projects, as the record label pushed them out. While they may not have been bestsellers, some of these efforts, such as Playlist: The Very Best of Destiny's Child and Love Songs, did bring the band back to a handful of Billboard charts after they’d broken up.

The vocal trio did score a surprising hit single in the UK in 2015 with “The Girl Is Mine.” The tune was produced by British house duo 99 Souls, who extensively sampled Destiny’s Child’s song “Girl” and Brandy and Monica’s “The Boy is Mine,” and both DC and Brandy were officially credited on the track. The catchy, upbeat dance number worked its way to No. 5 on the UK singles chart, giving them another top 10 smash almost a decade after their split.

In the 15 years since they broke up, Destiny’s Child has released just one new song, and surprisingly, it didn’t make much of a commercial impact. The trio’s previously-unreleased track “Nuclear” was featured on their compilation Love Songs, which came out in 2013.

Since they embarked on solo careers, Beyoncé has become not only the most prolific, but also the most successful of the bunch, and occasionally she reaches out to her friends to join her. While Michelle and Kelly haven’t recorded material with the singer for any of her albums, they have appeared alongside the superstar in some fun videos. Rowland joined Bey in the “Party” clip, while Rowland, Williams, and even the Queen’s sister Solange all danced along in the extended visual for the single “Get Me Bodied.”

Rowland and Williams have popped up at Beyoncé concerts from time to time, and there have been two high-profile instances of the three women appearing together and properly performing a Destiny’s Child song (several, actually) that were must-see moments. Bey recruited her former bandmates when she headlined the Super Bowl halftime show in 2013, and the three sang “Bootylicious,” “Independent Women” and even the star’s own “Single Ladies (Put a Ring on It).”

Five years after that show, Rowland and Williams again joined Beyoncé onstage for her headlining set at Coachella, or Beychella, as it was called in 2018. They performed the smashes “Lose My Breath,” “Say My Name” and “Soldier,” and they also appeared in Bey’s Netflix documentary Homecoming and the live album of the same name.

So far, Rowland has only brought Beyoncé and Williams back for one song, and sadly, she didn’t release it as a single. “You Changed” was featured on Rowland’s fourth solo album Talk a Good Game, which was released in 2013 and which stands as her most recent full-length.

Just like Rowland, Williams has just one song as a solo act that features both of her former Destiny’s Child sisters. Since breaking off, Williams has focused primarily on gospel and Christian music, and she scored one of her biggest successes with the 2014 single “Say Yes,” which also featured Bey and Kelly. The tune was a No. 1 smash on Billboard’s gospel ranking, and the three even performed it live, which must have been a truly special sight for those in attendance.

More like this
What Demi Lovato Really Thinks About Child Stardom, Depression, & Sobriety
By Radhika Menon
Everything To Know About Taylor Swift’s 10th Studio Album, 'Midnights'
By Grace Wehniainen and Jake Viswanath
Mariah Carey Is Releasing Her “Lost” '90s Grunge Album
By El Hunt
Twitter Is Freaking Out Over Rihanna’s 2023 Super Bowl Halftime Show Announcement
By Stephanie Topacio Long
Get Even More From Bustle — Sign Up For The Newsletter