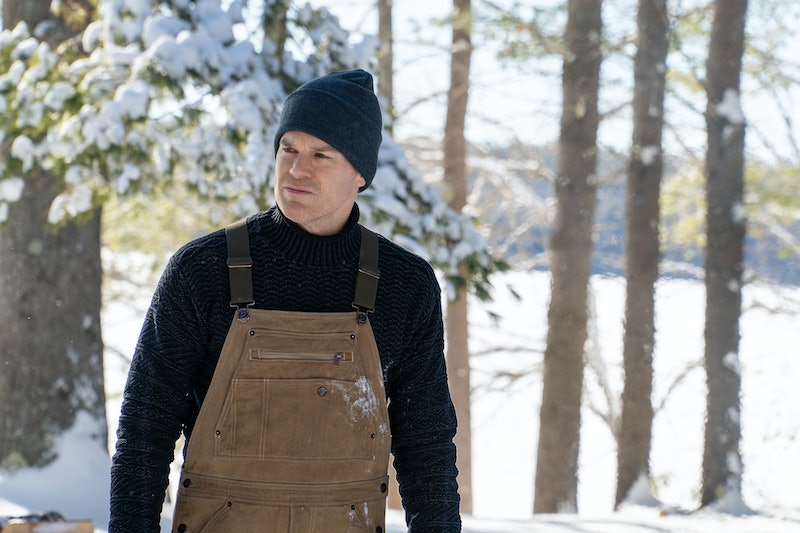 The last time viewers saw serial killer Dexter Morgan, he was living an isolated life as a lumberjack somewhere in Oregon. Many of the other characters in Dexter had died, including Rita Bennett, Sergeant Doakes, Lieutenant LaGuerta, and his sister Debra. Others, like Angel Batista, Joey Quinn, and Vince Masuka, managed to make it out of the series alive but were presumably still living and working in Florida. And he’d sent his love interest Hannah and son Harrison to Argentina together to get away from his dark influence. Basically, Dexter had cut ties with everyone in his life. So it’s unsurprising that the cast of the upcoming Showtime revival, Dexter: New Blood — which picks up 10 years after the controversial series finale — includes a lot new faces.

Here’s who you can expect to see in the eight-episode miniseries, which premieres Nov. 7.

In the eight years since the original Dexter wrapped its run, Hall has appeared in a number of acclaimed films and TV shows, including the biopic Christine, the comedy Game Night, the Netflix thriller Safe, the historical drama The Report, and memorably in one episode of The Crown, on which he guest starred as President John F. Kennedy.

“The character is psychologically in such a different — he’s a different person in a lot of ways,” Hall told GQ of reprising his role. “The Dexter we meet at the beginning [of the show] is very ordered in his way, and the Dexter we meet now is very much on the edge of, and soon after we start, in the midst of chaos.”

Yes, even though she died in the series finale, Dexter’s dead sister Debra is back. How? You’ll have to tune in to find out. You may have seen Carpenter more recently in the short-lived CBS series Limitless or in the 2018 Mel Gibson movie Dragged Across Concrete. She’s also voiced several iconic characters including Black Widow, Catwoman, and Sonya Blade in animated films over the last few years.

When a young man in Iron Lake goes missing, his concerned – and wealthy – father will do whatever it takes to find him. And his determination to uncover the truth may prove to be a thorn in Dexter’s side.

Playing the father is Clancy Brown, who’s been working steadily in Hollywood for decades. His resumé includes movies like The Shawshank Redemption, Starship Troopers, Oscar nominee Promising Young Woman, and the upcoming action sequel John Wick 4, as well as TV shows like ER, Carnivàle, Lost, Sleepy Hollow, and Billions. Like his New Blood co-star Julia Jones, Brown has appeared in an episode of The Mandalorian (as a red-skinned alien plotting a jail break with Mando); and like his other co-star Hall, he’s guest-starred on The Crown as a U.S. President (appearing in an episode as JFK’s successor, Lyndon B. Johnson).

Though perhaps most famous for her role as werewolf Leah Clearwater in the Twilight franchise, Jones has also appeared alongside Jeremy Renner and Elizabeth Olsen in the bleak Western Wind River and starred with Liam Neeson in the snowy thriller Cold Pursuit. Most recently, she had a memorable one-episode arc on Westworld as the ill-fated host Kahana and in The Mandalorian as a young woman who hired Mando to help protect her village. On New Blood, she plays Angela Bishop, the sheriff of Iron Lake, New York…and Dexter’s new love interest.

Lehne has an extensive list of acting credits that includes both film (The Dark Knight Rises, Zero Dark Thirty, The Greatest Showman) and television (Lost, Supernatural, American Horror Story). His New Blood character, a smug oil baron who makes his home in Iron Lake, is polarizing: the citizens of the town either tolerate or actively protest him. But is he just a rich assh*le, or is he a rich assh*le with secrets to hide? The hidden room in his house he uses to abduct young drifters for nefarious purposes certainly suggests the latter.

Chung is probably best known for her roles on ABC’s Once Upon A Time as Mulan and in Lovecraft Country as a character named Ji-Ah who turns out to be a supernatural creature out of Korean legend. Her other credits include the movies Sorority Row, Sucker Punch, Sin City: A Dame To Kill For, and Big Hero 6. On New Blood, she plays a true crime podcaster who comes to Iron Lake to dig up dirt.

Though last seen as a child being whisked off to a new life in Argentina by Yvonne Strahovski’s Hannah, Dexter’s son Harrison is back and all grown up. He’s now played by relative newcomer Jack Alcott, who joins the show in his second major role following an appearance as Jason Brown in the historical drama The Good Lord Bird.

If you watched the short-lived NBC drama Believe, you may remember Sequoyah as Bo, the young girl gifted with supernatural powers on the run from nefarious government agents. Here, Sequoyah plays Audrey, the daughter of Iron Lake’s sheriff, Angela. And the fact that Angela and Dexter are dating certainly doesn’t put Audrey off from making eyes at Dexter’s cute son Harrison...

That’s right: Dexter’s most infamous antagonist is back. The New Blood writers have kept tight-lipped about the return of Arthur Mitchell, aka the Trinity Killer. The last time we saw him, he’d been murdered by Dexter in the Season 4 finale (but not before killing Dexter’s wife Rita, leaving baby Harrison in a pool of her blood).

Lithgow won an Emmy for his performance in the show, and went on to win another Emmy for his role as Winston Churchill in Season 1 of The Crown. He also recently portrayed Roger Ailes in the ripped-from-the-headlines drama Bombshell, and appeared in HBO’s revival of Perry Mason.