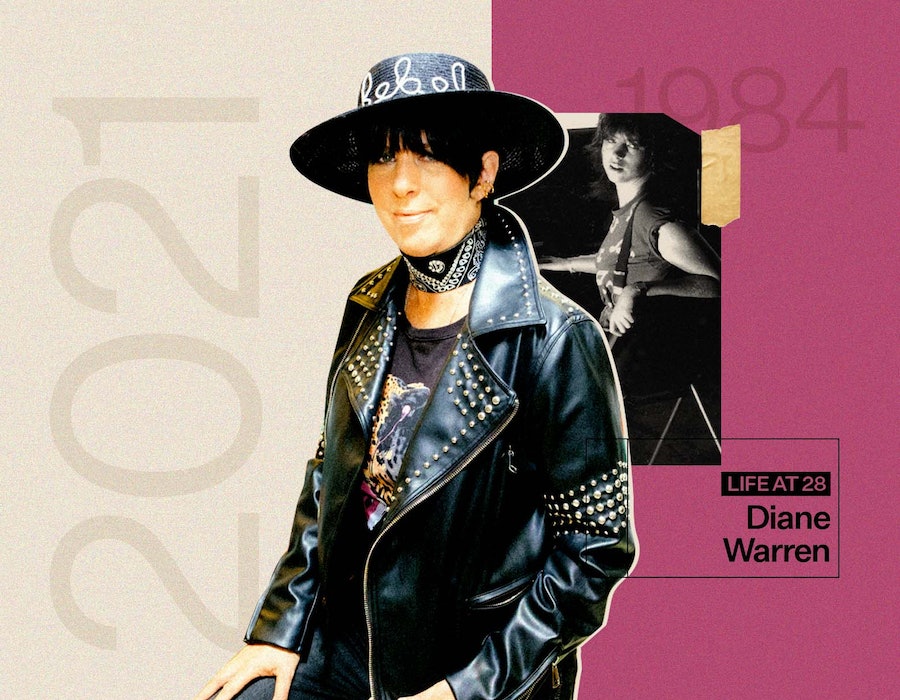 If you’ve watched Armageddon, Con Air, or Pearl Harbor, you’ve experienced Diane Warren’s songwriting prowess. With 12 Academy Award nominations for Best Original Song spanning five decades, Warren has become an Oscar-season regular who’s written iconic songs like Aerosmith’s “I Don’t Want To Miss A Thing,” LeAnn Rimes’ “How Do I Live,” and Faith Hill’s “There You’ll Be.” Now, she’s vying for her 13th nod for Reba McEntire’s “Somehow You Do,” which she wrote for the film Four Good Days starring Glenn Close and Mila Kunis.

But Oscar contention was far from Warren’s mind in 1984, when she was a 28-year-old with a burgeoning songwriting career in Los Angeles. Though songs she’d written were on the radio and had made the Billboard charts, she admits that none of her early career successes felt right or real.

“I wanted my songs to be heard. I wanted to have hit records,” Warren tells Bustle. “I wanted everybody to hear my songs all over the world.” A few years later, they would, when Warren got her first chart-topper with the 1987 Starship power ballad “Nothing’s Gonna Stop Us Now.” With global ubiquity also came awards: She won a Grammy in 1997 for Celine Dion’s “Because You Loved Me,” and an Emmy in 2016 for Lady Gaga’s “Til It Happens To You,” but the Oscar has continued to elude her — so much so that every year fans post “I hope you finally win”-style tweets and major publications write “Warren loses out again” headlines.

Now 65, Warren is still hoping for that elusive Oscar. She also released her first full studio album — Diane Warren: The Cave Sessions Vol. 1 — on which artists like John Legend, Maren Morris, G-Eazy, Luis Fonsi, Lauren Jauregui, Jon Batiste, Rita Ora, Carlos Santana, Leona Lewis, and Pentatonix bring her lyrics to life. And despite her almost comical lack of a certain golden statue on her mantle, she sees her many nominations from her peers as a sign of longevity.

“I’m the most-nominated woman in any category in Oscar history to not have won,” Warren says. “I’m kind of proud of that. I wish they’d give an award for that.”

Below, Warren remembers how she felt earning her first Oscar nomination more than 30 years ago, and discusses the songs that have a special place in her heart.

Take me back to 1984. How were you feeling about your life and career when you were 28?

You know, I was probably a little frustrated because I didn’t have my first really big hit yet. That would come the next year. I was 29 with “Rhythm of the Night” [by DeBarge]. I was working and working hard. I recall that and kind of waiting for my first break really, you know?

Could you feel that it was coming? Like you were almost there?

I always felt that. It’s, you know, that overnight success that takes forever. But I knew it was going to happen. I had no doubt. I never doubted that I’d be successful, but I never imagined this level. I knew I’d make it. My first Oscar nomination was three years after that, which was in 1988, [for “Nothing’s Gonna Stop Us Now” by Starship].

How did it feel to finally have that happen?

That was the coolest, I’ll tell you. What’s interesting about the Oscar nominations is ... I’ve had 12. Of course, it’s exciting. Every time I’ve been nominated, I’ve been jumping up and down and happy and beyond thrilled. Because it’s not easy to get nominated for an Oscar, unlike the Grammys where there are tons of song categories. With the Oscars, there’s five [slots] and there’s a lot of songs released every year and lots of movies. And if you look at the people that are in the music branch of the Academy [of Motion Picture Arts and Sciences], those are the best of the best of the best of the best of the best composers and songwriters that are living today. So if they nominate me, I’ll jump up and down, absolutely. It’s always very exciting.

I mean, I stay up all night waiting for the nominations. I love when some people go, “Oh, I don’t care. My manager called me.” Cut that off. You’re up. You’re not sleeping.

I do appreciate that you’re honest about it.

Do you ever get tired of talking about Oscar nominations?

I’m happy, and it’s a new song every year. Like this year, I’m talking about another new one. You know what, I’m happy to be in the game. My first nomination was 33 years ago. That was 1988. How crazy is that? If I had a choice of winning and never being nominated again, I would totally choose not winning and being nominated 12 times because that’s longevity. That’s respect among your peers, and my peers are pretty badass.

If you could go back in time and talk to your 28-year-old self, what advice would you have?

Just keep doing it. But I didn’t even have to give myself that advice, because my 28-year-old self knew that already.

Was there something you did at that age that you regret?

No. I think I’ve been pretty smart with the choices I’ve made and the decisions I’ve made. I wouldn’t really want to change anything. I love that things happen the way they’re supposed to happen. That’s what I really believe.

I love that. Because if I could go back, there are things I’d say like, “Don't do this,” “Work faster,” or something.

Oh, there’s things I’d maybe [change] with personal relationships and things like that, but not in my work. No. I can’t complain.

I am personally a big award nerd. The Grammys —

I never win that. I’ve been nominated a couple of times! It’s funny, people think I’ve won a lot of Grammys. I only won one Grammy like 25 years ago for “Because You Loved Me.”

Is there one of your 12 Oscar-nominated songs that has a special place in your heart?

“Because You Loved Me.” Even though I wrote that for Up Close and Personal, it was a way to thank my dad for believing in me. The song I wrote that Lady Gaga sings, “Til It Happens To You,” was really powerful and culturally important because it shifted a lot of stuff with Me Too and people talking about sexual assault. That song goes beyond that movie, because it could be about whatever you’re going through. People try to say, “It’s going to be OK; everything’s fine.” But when you’re in the middle of going through something traumatic, you don’t know it. They don’t know what you’re going through.

My song “Stand Up for Something” [by Andra Day featuring Common] has kind of become like a protest anthem. I’m proud of that. I’m proud of a lot of these songs for different reasons. The song I did this year, “Io sì (Seen)” with Laura Pausini, it’s Italian and I really love that song. I love what it says — that I want you to know that you’re seen because a lot of people don’t feel seen.

More like this
2023 Oscar Nominations List: 'Everything Everywhere All At Once' Leads With 11 Nods
By Jake Viswanath
Austin Butler Recalls Lisa Marie Presley Showing Him Elvis’ Bedroom
By Jake Viswanath
You’ll Definitely Recognise Isadóra Bjarkardóttir Barney’s Mum
By Maxine Harrison
Lisa Marie Presley's Secret Granddaughter Was Revealed At Her Funeral Out Of Nowhere
By Jake Viswanath
Get Even More From Bustle — Sign Up For The Newsletter
From hair trends to relationship advice, our daily newsletter has everything you need to sound like a person who’s on TikTok, even if you aren’t.