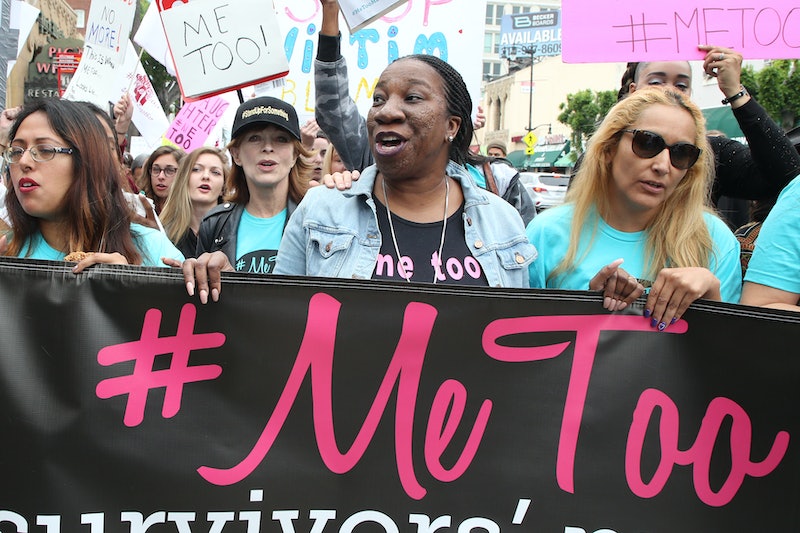 A year ago, the hashtag #MeToo blew up on social media after actress Alyssa Milano asked women everywhere to share their stories of sexual harassment. The catalyst was of course the numerous allegations against Harvey Weinstein, from which he has denied criminal wrongdoing. Since then, several renowned men have been accused of similar things and the topic of sexual harassment has been at the forefront of a lot of people's minds. But has the movement made any difference to the mindset of the average person? A new study believes that men's attitudes have indeed changed since #MeToo.

Women's rights charity The Fawcett Society surveyed more than 2,000 men and women in the UK to find out their attitudes to sexual harassment. While unsurprisingly, it's mostly women who have taken #MeToo to heart (it was a woman, Tarana Burke, who coined the phrase back in 2006), men do seem to be getting on board with the fact that women deserve better.

Young men in particular have admitted to a change of heart. Fifty-eight percent of men aged between 18 and 34 say they are more likely to speak up against sexual harassment with 54 percent of the same age group admitting to having a conversation on the topic with another man. This isn't a shock considering the younger generation are more likely to spend time on social media and see viral conversations like #MeToo taking place.

Older men are unfortunately not exhibiting the same signs of change, a fact that is pretty worrying. Although 42 percent of male respondents said they were aware of #MeToo, only 24 percent of men aged 55 and over said they were more likely to challenge inappropriate behaviour. However, more than half (56 percent) of men in that age range believe there is a difference in what is now seen as acceptable.

Men of a certain age seem to think it's not their responsibility to set a good example or elicit change. As The Fawcett Society's chief executive, Sam Smethers, states, this is plainly unacceptable. "Older men have to be part of the change because they often hold positions of power. But their attitudes are lagging behind," she said in a statement. "They don't seem to realise the #MeToo movement is also about them."

The views of the older generation were exemplified when Brett Kavanaugh was appointed to the Supreme Court on Saturday — giving him a lifetime position on the most important judicial body in the United States — despite three allegations of sexual assault being made against him, and one of his alleged victims Dr. Christine Blasey Ford standing up in front of the world to make her testimony. Kavanaugh denies all the allegations made against him.

The results of The Fawcett Society's survey have been published in a report along with recommendations for how the UK government can tackle the problem, particularly in the workplace.

The charity is calling on the government to reinstate third-party harassment laws which force employers to protect their female employees from harassing clients. It is also asking politicians to introduce legislation that makes large-scale employers prevent harassment within the workplace. Lastly, it is asking for misogyny to be officially labelled a hate crime.

Only time will tell if the people in power will listen.