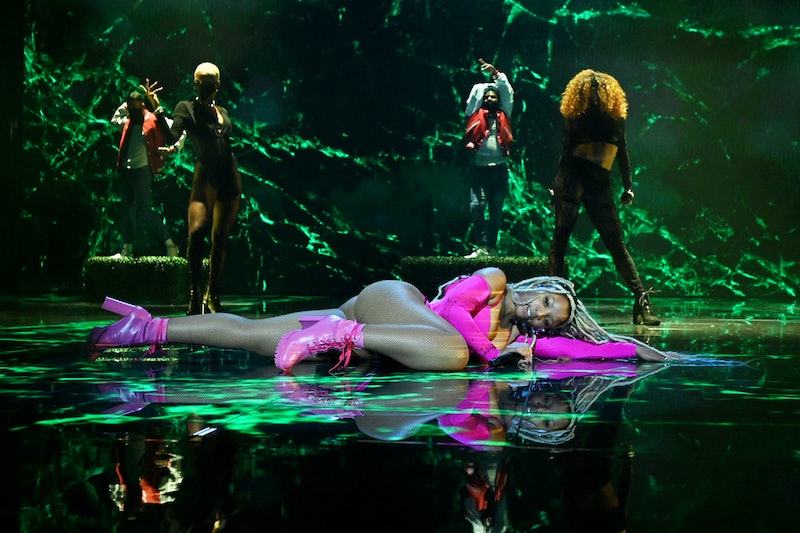 R&B duo Chloe x Halle have done pretty much everything together in the spotlight since their humble YouTube days. They sing together, do interviews together, and also act together as the Forster sisters on Freeform’s grown-ish. But one of the Bailey siblings is breaking out as a solo performer after performing alone for the first time at the MTV Video Music Awards on Sept. 12.

Chloe showed her individuality by performing her new single “Have Mercy,” which has already amassed 8 million YouTube views since its Sept. 9 release. The performance was praised far and wide on social media. The official VMA Twitter account wrote, “@ChloeBailey you ATE that performance UP!!! #VMAs,” while another tweet written from a viewer said that Chloe “ATE THAT FOR ME THE VOCALS THE CHOREOGRAPHY THE BODY AMAZING!!!”

Fans who are wondering whether they broke up will be relieved to know that Halle also showed public support for her Chloe’s solo debut, proving that the sisters are on good times and just taking time to pursue individual projects (Halle will star as Princess Ariel in the upcoming adaptation of The Little Mermaid). Sharing a picture of her own VMA red carpet look on Instagram, Halle wrote in the caption, “vmas 2021, let’s all prepare to see @chloebailey slay the stage!!” That sounds like true sisterly love.

Chloe, whose “Have Mercy” will appear on her debut solo album, will also perform the song at H.E.R.’s Lights On Festival in October.

Despite Chloe’s solitary endeavors, there are no visible signs of a Chloe x Halle split. Back in March, both sisters told The Breakfast Club’s Angela Yee that their decision to have separate Instagram accounts in no way signified a breakup of the duo.

“What I really appreciate with Halle and I is that, you know, even when we are together constantly, we never try to have the other one compromise or lessen who they are as an individual to make the group work,” Chloe said. “We both are so alike and so similar, but we’re also so different. You know, Halle’s an Aries. I’m a Cancer. We’re like on the complete opposite sides of the spectrum. And how we are as individuals shines through with our group and now people are really getting to know us more individually as well.”

More like this
Everything To Know About Taylor Swift’s 10th Studio Album, 'Midnights'
By Grace Wehniainen and Jake Viswanath
Mariah Carey Is Releasing Her “Lost” '90s Grunge Album
By El Hunt
Twitter Is Freaking Out Over Rihanna’s 2023 Super Bowl Halftime Show Announcement
By Stephanie Topacio Long
Kanye West Apologizes To Kim K "For Any Stress I Have Caused" In Rare Interview
By Jake Viswanath
Get Even More From Bustle — Sign Up For The Newsletter