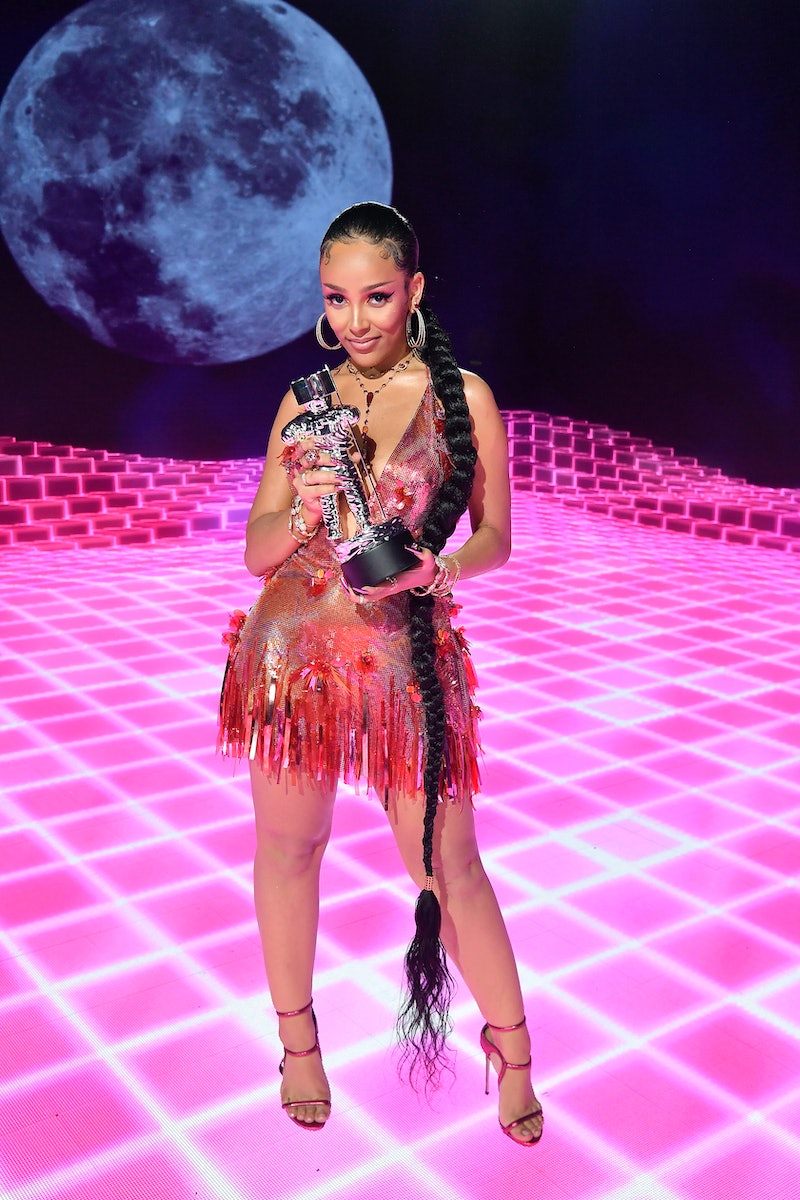 The MTV Video Music Awards have long been an annual showcase of the year’s biggest songs and music videos, the artists behind them, and the chaos that ensues when countless A-list musicians gather under one roof. Last year’s show looked a little different due to the pandemic. Keke Palmer hosted the partially-live event that took place at several locations across New York City, with some performers even broadcasting from Los Angeles and South Korea. This year will see the awards show return to one of its previous locations: Barclays Center in Brooklyn, New York, aka the same venue where Miley Cyrus twerked on Robin Thicke, foam finger in hand. Justin Bieber leads the 2021 nominations with nine, followed by Megan Thee Stallion and BTS with seven each. Ahead of the show’s Sept. 12 air date, here’s everything to know about the 2021 MTV VMAs.

Recent VMAs hosts have included Palmer in 2020, comedian Sebastian Maniscalco in 2019, Katy Perry in 2017, and Cyrus in 2015. This year, Doja Cat will assume hosting duties, marking her first-ever gig as an emcee. But she’s no stranger to the VMAs, as the pop star performed “Like That” and “Say So” from a digitized galaxy stage at the 2020 awards, where she also received four nominations and took home the Push Best New Artist award.

The 2021 VMAs pre-show will be hosted by Nessa Diab and Jamila Mustafa, with R&B/pop singer Tinashe appearing as a celebrity correspondent.

Whether or not any musicians will debut a new single while wearing a snake à la Britney Spears with “I’m A Slave 4 U” at the 2001 VMAs is to be determined, but the 2021 show currently features a stacked list of performers. Fresh off the release of her sophomore album Planet Her, Doja Cat will not only host the awards show, but she’s also set to perform during it. With six nominations also pending, the “Kiss Me More” singer is bound to have a good night on Sept. 12.

Other performances include Cinderella star Camila Cabello with “Don’t Go Yet,” Shawn Mendes and Tainy with “Summer of Love,” Bieber and The Kid Laroi with “Stay,” Kacey Musgraves with “Star-Crossed,” Lil Nas X and Jack Harlow with “Industry Baby,” Ozuna with “La Funka,” Machine Gun Kelly and Travis Barker with “Papercuts,” Twenty One Pilots with “Saturday,” Olivia Rodrigo with “good 4 u,” Alicia Keys and Swae Lee with “LALA,” and Foo Fighters. Additionally, Chloe x Halle’s Chloe Bailey will make her solo debut as Chloë with a performance of her new single “Have Mercy,” and Normani will perform her hit track “Wild Side” for the first time on TV.

Lorde, who just released her third album Solar Power, was originally announced to perform on Aug. 18 but pulled out on Sept. 3. “Due to a change in production elements, Lorde can no longer perform at this year’s show,” the official VMAs Twitter account posted. “We love Lorde and cannot wait for her to perform on the VMA stage in the future!”

Before those artists take the main show stage, several performances will go down during the pre-show. Rapper Polo G will showcase his first Billboard No. 1 hit, “Rapstar,” while pop star Kim Petras will perform her latest single, “Future Starts Now.” Celebrating the release of their first album in nine years, EDM supergroup Swedish House Mafia will also appear at the pre-show to perform “It Gets Better” and “Lifetime.”

The 2021 MTV Video Music Awards will air live on Sunday, Sept. 12, at 8 p.m. ET/PT. It’ll be broadcast on MTV as per usual, but the awards show will simultaneously air on several other networks, including CMT, Comedy Central, Logo, MTV2, Nickelodeon, Paramount Network, Pop, TV Land, VH1, and The CW.

If you don’t have cable, don’t worry. The 2021 MTV VMAs will also be streaming on Paramount+, which costs $5 for a basic subscription or $10 for the ad-free version.

More like this
Everything To Know About Taylor Swift’s 10th Studio Album, 'Midnights'
By Grace Wehniainen and Jake Viswanath
Jason Derulo Is Launching A New Singing Show In The UK
By Maxine Harrison
How Ghosts Inspired Kesha’s New Music
By Jake Viswanath
Twitter Is Freaking Out Over Rihanna’s 2023 Super Bowl Halftime Show Announcement
By Stephanie Topacio Long
Get Even More From Bustle — Sign Up For The Newsletter

This article was originally published on Sep. 7, 2021