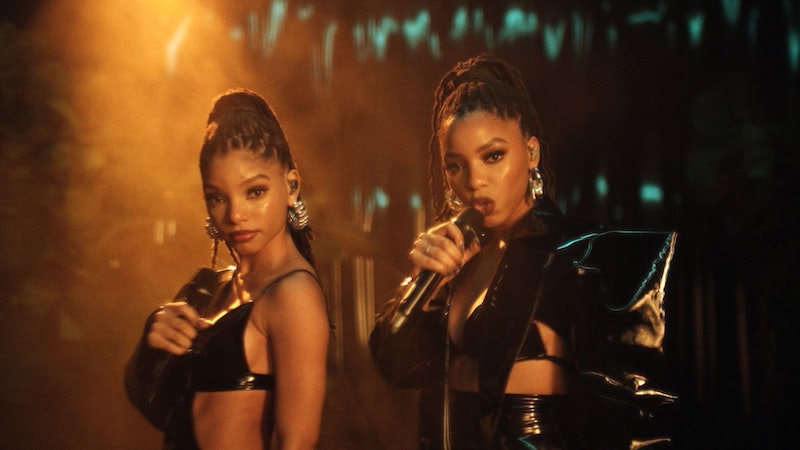 Chloe of Chloe x Halle may be taking the stage for the first time solo at the 2021 MTV Video Music Awards, with her new song “Have Mercy,” but whether or not Chloe’s solo in her personal life remains a mystery for fans. With fiery lyrics like, “That's why I don't play with you. I spend a little time, don't stay with you,” Chloe x Halle’s Ungodly Hour album begs the question of who the two sisters might be dating or putting on the backburner as they dominate the R&B field. Though they aren’t shy when it comes to their lyrics, performing, or their social media presences, Chloe x Halle are incredibly private when it comes to their personal lives. Still, rumors about the Grammy-nominated sisters' dating history have made headlines, so it’s time to figure out who Chloe x Halle are dating.

When it comes to Halle, news of current and past suitors appears non-existent. The Little Mermaid actress seems to be extremely tight-lipped about her dating history, which is no surprise considering she’s an expert at avoiding prying questions. As for Chloe, rumors of her supposed relationship with fellow Grown-ish star Diggy Simmons surfaced in 2019 after they hung out at Dave and Buster’s. The unconfirmed reports gained even more traction following the release of Ungodly Hour, which was nominated for the Best Progressive R&B Album Grammy category earlier this year. Those who couldn’t stop playing the album on repeat will recall when Chloe "calls out a trifling ex on more than one song,” as Vulture put it.

And even the deepest of dives on their Instagram accounts don’t reveal much about their relationship status. There is a January 2021 Instagram photo of Chloe hugging R&B artist 6lack, but the caption suggests that the two may have been working on new music together. Regardless of whether or not they’re dating or simply collaborating, Chloe’s fans have her back. “IDK IF THIS IS A COLLAB OR A RELATIONSHIP BUT IM HERE FOR BOTH,” one follower wrote.

In June 2020, following their album release, both sisters revealed in an Instagram Live that they were single at the time. And in a December 2020 interview with Bustle, Chloe kept mum on their love lives, only disclosing that "being in love and being heartbroken" served as her and Halle's inspiration for the album. "It starts from us gossiping about a guy. Just talking crap about whoever it is, and from there, it turns into a song."

However their personal lives are shaping up, one thing is clear: Chloe x Halle can take any relationship hiccup and turn it into a chart-topping hit.

More like this
9 Photos Of Celebrity Couples & Unexpected Duos At The 2023 Grammys
By Jake Viswanath
You Can Still Stream The 2023 Grammys Even If You Don't Have TV Or Cable
By Grace Wehniainen
The Meaning Of Steve Lacy’s “Bad Habit” Lyrics
By Radhika Menon
Olivia Rodrigo Manifested Finally Meeting Demi Lovato
By Jake Viswanath
Get Even More From Bustle — Sign Up For The Newsletter
From hair trends to relationship advice, our daily newsletter has everything you need to sound like a person who’s on TikTok, even if you aren’t.