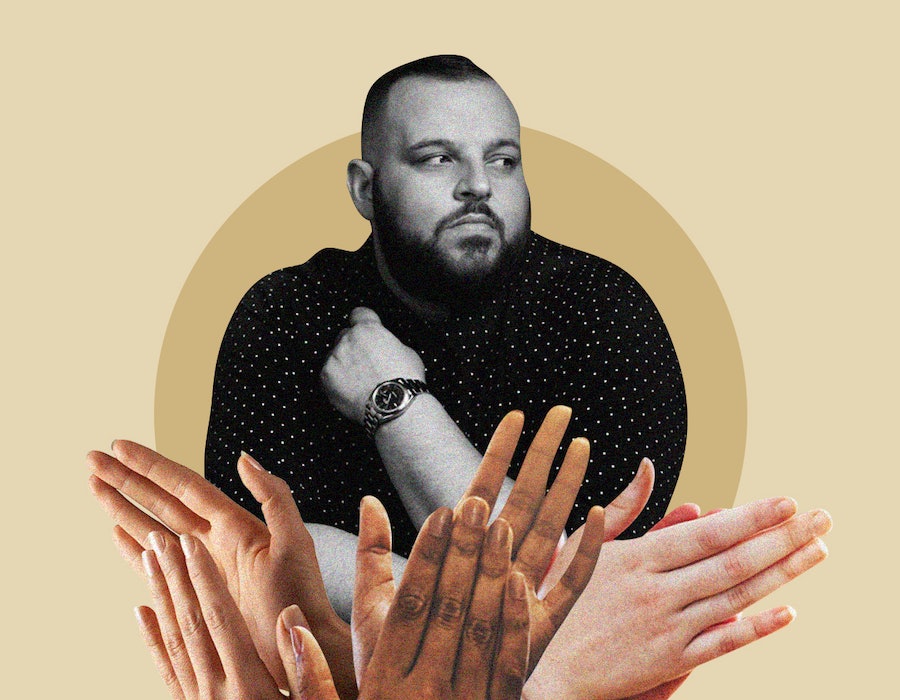 Welcome to Do It For The Applause, a series in which we ask performers, writers, business leaders, and public figures to think about the notion of applause and what it means to them. Today, we hear from entertainer and creative Danny Franzese, who many will recognise as Damian from Mean Girls.

Being part of a film that defines how a generation speaks, thinks, and acts can do funny things to your understanding of applause. When Danny Franzese joined the cast of Mean Girls in 2004 he was 25 years old, only a few years into his acting career, and still grappling with his sexuality. In fact, it would be ten years on from Damian, a character famously described as “too gay to function,” that Franzese came out publicly, which he says explains his initial reaction to world-wide fame and adoration.

“I think there are some people who need applause like a drug. They need the affirmation and attention of people in order to fill some sort of void within them,” Franzese tells me as we chat over FaceTime (he’s in Florida with his family while I sit in Bustle’s London office). “And I think that might've been how I started out as a young, maybe closeted, queer kid trying to figure out what there was about this safe space, or playing other people, that I enjoyed.”

Now 41, Franzese has found new meaning in performing, and much of that stems from his faith, which he has been vocal about for many years. “As I grew older and I got more centred, I [started to] view talent as a light that God shines on you. And, when you use your gifts, you become a surface that reflects that light so others can bask in it [too]. And I see applause as the vibrations that come off of that.”

He continues: “That's why I have so many multi-hyphenates. If God has given me the disposition to be a little bit good at something, it's my duty to pursue that and try to shine that light as bright as I can.” As well as an actor, Franzese is a comedian, fashion designer, and model (which I’m hoping involves a lot of pink shirts). His attitude to applause is “a little deep,” he admits, but it’s also important to him to lead a life that isn’t “ego-driven,” he adds.

On top of all the roles listed above, Franzese is also an activist, focussing specifically on body positivity and LGBTQIA+ issues. When I ask about his proudest achievement, he tells me about becoming an ambassador for the Elizabeth Taylor AIDS foundation.

“I never really had political aspirations, but I do think that if you’re in Hollywood, and in entertainment, you have an opportunity to move the envelope just as much, if not more than if you were in politics,” he says. “In politics, you have to work off of a majority vote, but in Hollywood you can create content that changes the way people think, and the way they vote, and the way that they react to other people. You can let them live in someone else's shoes. They can see what it's like to be a minority. They can see what it's like to be an alien in space. And I think that that's one of the awesome things that we get to do as actors.”

Despite achieving so much, Franzese still has a fair few things to check off his bucket list. (“If I had no more goals, I'd be done, right?”) Broadway is a big one. He wants to perform in musical theatre, with A Funny Thing That Happened On The Way To The Forum being the ultimate dream. “But if I was to be able to create something new, I would love to do something related to either queer or Italian history, or spirituality. Something that's closer to who I am because I think, if I was able to connect on those levels, that would be awesome.”

He’d also love to be cast in Pose. “I think Pose is doing some amazing things for diversity, for inclusion, for HIV storylines, for showing different types of people being sexual. I think it's doing so many things for television,” he says. Let’s hope someone from FX is reading this...

Who's applause means the most to you?

My family. Lots of people think I'm funny but my family is really funny. They are hysterical people. My mum, my brother, my sister, my in-laws, we're just all funny... We enjoy spending our time laughing, making fun of each other, playing games together. So when I do a project and they laugh at that, then I know that I've succeeded.

Money. [Laughs]. No. Out of those four, I would take the standing ovation. I think it resonates the most powerfully because, truly, I feel like talent is God's light and the gift that you give the audience. Their applause is like saying “I did it, I used the gifts, I worked hard. I put the time in, put pen to paper and did all of the things that I promised I would do. And here it is, the glory is yours.”

A specific one. Like when someone says: “That moment when you did this in this film made me feel this way.” Or, like, “That exact time that you walked through the door, that's when you had it.” Specifics help me grow and develop as an artist which I really, really appreciate it and I'm so grateful [for].

A backhanded compliment. I'm just always like, why do you have to go there? I believe in spreading happiness and positivity. So to me, it's like, when somebody does something like that, it really shows what's wrong with them.

I feel we live in a very volatile world where everyone's nervous about everything all the time. Constantly apologising for things that they shouldn't be sorry for. I come from a place of where it's [all about] gratitude, you know? So I think that [you should just] be grateful that somebody complimented you and thank them. I think the proper answer is just “Thank you.”

My mum is in the corner raising her hands. Mum, you're fine. She was almost quiet the whole interview! So, besides my mother, you know who I would like to give a little bit of applause to? Ariana Grande. I think she's been through so much and she's so giving... she's raised so much money for voting and she's just such a kind person and great role model.

One time, we were talking online and I wanted to get her “No Tears Left To Cry” sweater, but they didn't make my size. I told her and she went and had all of her merch sizing extended. It was such a sweet thing [to do] and that's a way to take something that you didn't even realise could become a problem and immediately fix it, and make more people happy.