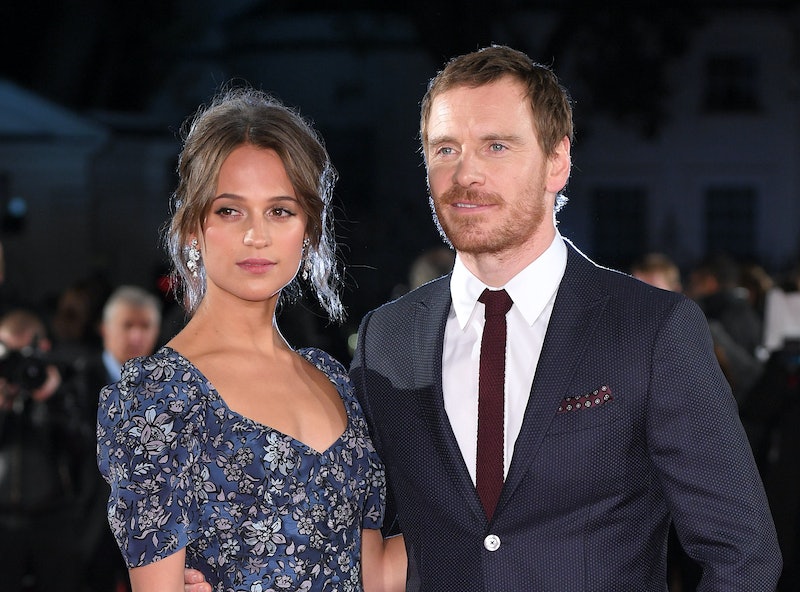 Michael Fassbender and Alicia Vikander have been together for five years since meeting on the set of 2016’s The Light Between Oceans. The pair are fiercely private, meaning details of their relationship are scarce, including when it comes to starting a family. But a recent snap of Michael Fassbender cradling a baby while on set with his wife has sparked discussion.

The photo was taken in Paris on the set of the limited series Irma Vep, which Vikander is currently working on. While she was spotted moving between scenes in slippers and a robe, her husband was papped holding a young baby. The Daily Mail reports that, so far, no other information has become available about whether the baby belongs to the couple, and representatives have yet to respond to their request for comment.

Some publications have taken the pictures as confirmation that the two have started a family, but so far nothing has been confirmed. There was speculation about whether Vikander was pregnant earlier in 2021, but again, nothing was revealed by the couple or their representatives.

As mentioned, the pair are known to be private when it comes to their relationship and personal lives. Speaking to Entertainment Weekly about their work-home relationship, Vikander commented, “I think we’ve made a clear statement that we keep certain things just between us. It was very easy to unite, but that’s quite personal.”

Fassbender added, “I’m not going to talk about my private life with a total stranger, unless I feel like I need to. Why would I? I don’t.”

In Irma Vep, Vikander plays an American movie star who travels to France to work on a remake of a French silent classic film, but struggles to keep the distance between her on- and off-screen life.

More like this
Parminder Nagra Definitely Relates To Her 'Maternal' Character
By Maxine Harrison
Laura Anderson Pulled The Ultimate Girl Power After Her Break-Up
By El Hunt and Megan C. Hills
Turns Out George Clooney Is A Huge Fan Of This Classic British Game Show
By El Hunt
'Bridgerton's Regé-Jean Page Is The World’s Most Handsome Man
By Darshita Goyal
Get The Very Best Of Bustle/UK
Sign up for Bustle UK's twice-weekly newsletter, featuring the latest must-watch TV, moving personal stories, and expert advice on the hottest viral buys.