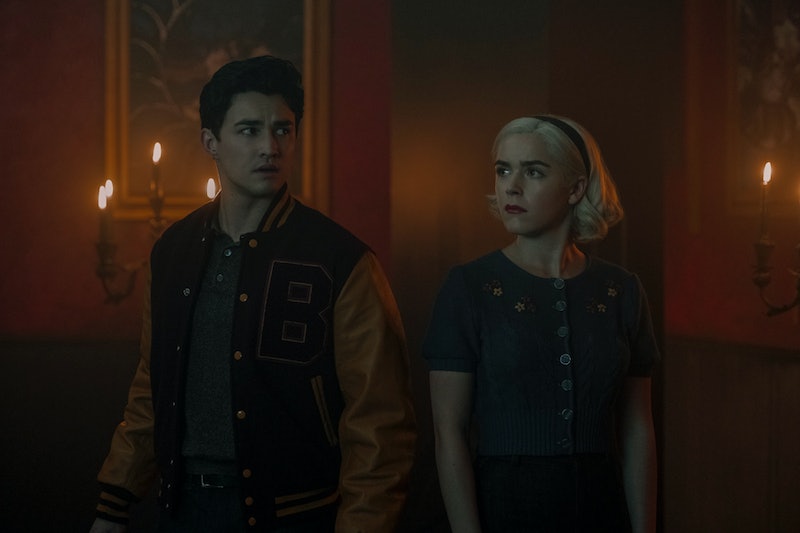 Major spoilers ahead for Chilling Adventures of Sabrina Part 4. Sabrina Spellman (Kiernan Shipka) and Nick Scratch (Gavin Leatherwood) have quite literally gone through hell and back in the name of love, so fans of the couple will be happy to know that they end up together in the fourth and final season of The Chilling Adventures of Sabrina. The bad news? It's far from a happily ever after.

CAOS Part 4 follows Sabrina, Nick, and the rest of Greendale as they face off against a series of evil forces called the Eldritch Terrors, which have been summoned by Father Blackwell to destroy Sabrina and possibly the planet. Each one brings a fresh new horror ranging from haunted spirits to demon parasites; in the series finale, they face off against the most formidable terror yet: a nothingness named The Void that threatens to consume the entire world.

Amidst all of this, Sabrina and Nick rekindle their romance. At the end of Part 3, Nick was still reeling from the trauma of serving as a cage for Lucifer, misusing alcohol and drugs as a way to cope. After he technically cheated on Sabrina with some sex demons, she found herself once again drawn to the sweet and gentle Harvey (Ross Lynch), despite the fact that he was now dating her best friend Rosalind (Jaz Sinclair).

Ultimately, Nick told Sabrina that he needed some time and space to get to a healthier place, and the two emotionally parted ways. But in Part 4, Nick has a change of heart. “We are endgame,” he tells Sabrina after confessing he wants to get back together. Sabrina is skeptical at first, but she realizes that their kind of passionate, magical love is exactly what she wants. Nick has always believed in her, celebrated her power, and been eternally there for her in tough moments. He has accepted her for the witch she is and never asked her to change or give up parts of herself. When she's told she may only have a few hours to live, she chooses to spend them with Nick, and the two have sex.

Their happiness is short-lived, though. In order to protect her friends and family from The Void, Sabrina sacrifices her life in the series finale. But Nick follows her even in death. In an extremely questionable choice for the same streaming service that brought us 13 Reasons Why, he drowns himself in the Sea of Sorrows and reunites with Sabrina in the afterlife, which in this case is a brightly lit room filled with gold-framed paintings and a fun wall decal that reads, “The Hereafter.” Here, they can be together forever.