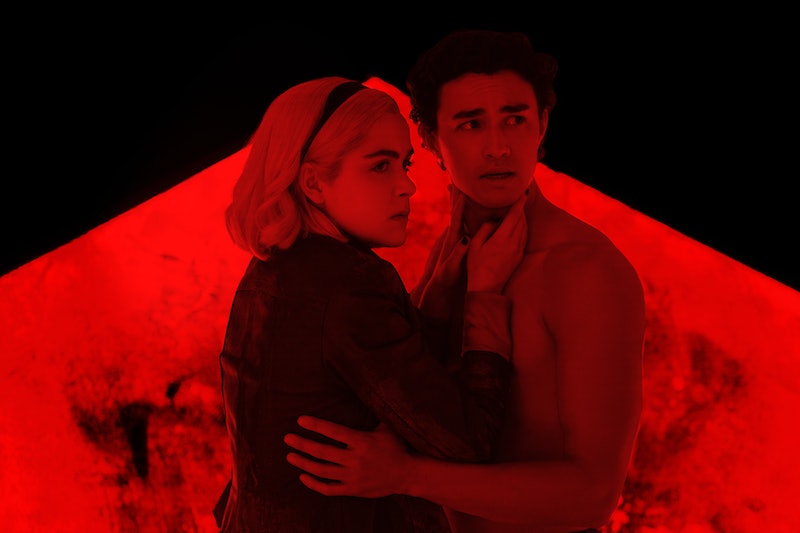 Spoilers ahead for Chilling Adventures of Sabrina Part 3. Sabrina Spellman may be able to simultaneously rule hell and be a witchy teen in Greendale, but even she can't force love. In The Chilling Adventures of Sabrina Part 3, she and her warlock boyfriend, Nicholas Scratch, hit a rough patch and eventually part ways. And while Nick and Sabrina may get back together eventually, it's clear that they need to spend some time apart first.

"I think this season is so much more about Sabrina coming into her own as a person," Shipka tells Bustle on the CAOS Part 4 set. "We've really only met her and known her in relationships. I mean, pretty soon after Harvey, she bounced over to Nick." Ultimately, Part 3 is about "Sabrina's relationship with herself, and her relationships with her friends and with her family" in addition to any love interests.

Nick is also in need of some serious self-reflection, as he tells Sabrina in Episode 5. Earlier in the season, he said some horrible things to her, including that she wasn't worth the abuse he suffered at the hands of her father, the Dark Lord, and that he can't stand to look at her. It's clear he's still struggling to process the lasting effects of his possession and consequent torture, but Nick worries that it wasn't the Dark Lord's influence that made him say those things at all — that Lucifer, in fact, "activated [and] exploited something that was already there."

As a result, Nick explains that he needs time and space — that he and Sabrina both do. And he's right. As Prudence later points out, Nick never told Sabrina thank you for everything she went through to bring him back. He can be moody, unfaithful, and downright cruel, not to mention the fact that he cheated on Sabrina with sex demons. On the flip side, however, Sabrina has had a drastically positive affect on him, so it's possible they'll get back together and be the better for it.

That said, there are a lot of of other complicating factors. Firstly there's Caliban, the self-proclaimed Prince of Hell with whom Sabrina shares some serious chemistry. He may be imprisoned in the bowels of the underworld by the end of Part 3, but that doesn't mean he'll stay there forever. And there's the matter of Harvey, too. Part 3 makes plain he and Sabrina still have lingering feelings for each other, but in the final episode, she burns the wick of two interconnected candles, one of which had her name inscribed in the wax and Harvey's on the other. This is meant to dissolve her feelings for him, but perhaps love is stronger than magic.

On Nick's end, there's his old fling Prudence, whose arms he seeks comfort in at the end of Part 3 (just after she's also broken things off with Ambrose). However, it's unclear whether their embrace is platonic or something more. "[Nick and Prudence have] known each other for a very long time," Leatherwood tells Bustle. "They've gone to school together, they have a past.... So there's definitely some strong attraction there. As far as it going anywhere, you know, that's gonna have to be answered later."

Leatherwood, for his part, hopes it's just a fluke and that Nick and Sabrina are endgame. "Personally? I would say [they are]," he says. "But who knows? That's the great thing about this world: It's full of surprises."