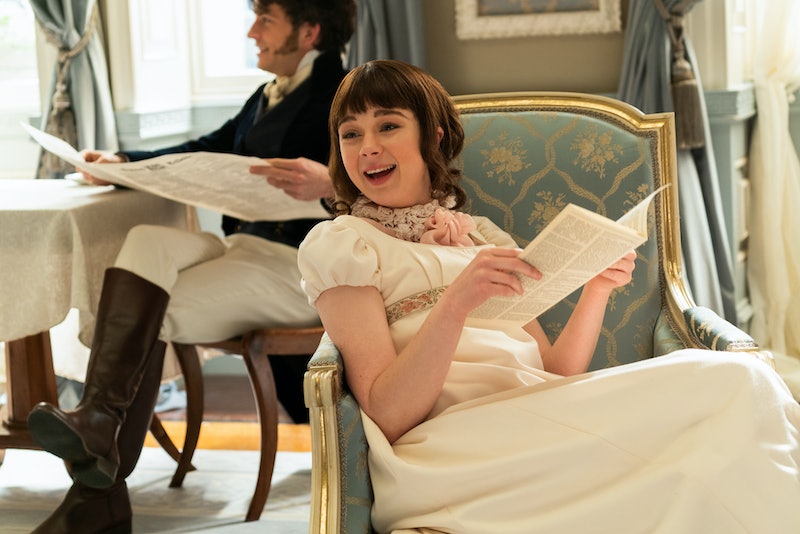 Spoilers for Bridgerton ahead.

Claudia Jesse’s performance as the witty and brazen Eloise Bridgerton might have often been overshadowed by Daphne and Simon’s love story in season one, but she still became a fast fave among Bridgerton viewers. And rightly so. Eloise completely disregarding the notion of having to find a man is nothing short of iconic. But does Eloise ever change her tune? Does Eloise ever marry? Brace yourself, dear reader.

In short, yes. Eloise does in fact find love – but it is in a very unconventional way, fitting Eloise’s character – and her rebellious streak – perfectly. But it doesn’t happen until the fifth book, To Sir Phillip, With Love, so we are unlikely to see the storyline play out in the Netflix series anytime soon.

In the book, Eloise discovers that her cousin Marina Thompson has passed away. (Yes, the Marina.) While Marina plays a pretty significant role in the first season as a cousin to the Featheringtons, that’s certainly not the case for her character in the books. In Quinn’s books, she’s only ever mentioned in To Sir Phillip, With Love, and that’s only to set up Eloise’s romance with Phillip Crane.

In the book, Phillip and Marina are married and have two children together – a twin son and daughter. Several years later, Marina attempts to drown herself in a lake. Phillip rescues her, but she dies a few days later. Phillip is left to raise their twins as a single father, but finds solace in Eloise’s letter of condolence. The two strike up a friendship via letter, and over time they start to fall for each other. So much so, in fact, that Phillip proposes to Eloise.

Unsure about what to do at first, Eloise soon finds herself arranging to meet Phillip in person – without the knowledge of her mother or older brothers. As she arrives, Eloise soon discovers that Phillip wasn’t the man she was expecting. Described by Quinn as “moody and ill-mannered”, Phillip is quite clearly still grieving for Marina. Not only that, but he hadn’t mentioned he was a single father of two, either.

The more time she spends with Phillip and his children, the more Eloise starts to care for them. However, her brothers eventually discover that she’s been spending time with a man unchaperoned and demand that she marry Phillip to retain her honour. Eloise blames Phillip for “her predicament”, but the couple come to realise that their match isn’t “of convenience at all, but a love match.” And, of course, they end up getting married.

More like this
6 'Happy Valley' Easter Eggs You May Have Missed
By Sophie McEvoy
'The Last Of Us' Has Officially Been Renewed For Season 2
By Darshita Goyal
Turns Out George Clooney Is A Huge Fan Of This Classic British Game Show
By El Hunt
Rupert Grint Just Shared A *Major* Update About Ron Weasley’s Future
By El Hunt
Get The Very Best Of Bustle/UK
Sign up for Bustle UK's twice-weekly newsletter, featuring the latest must-watch TV, moving personal stories, and expert advice on the hottest viral buys.