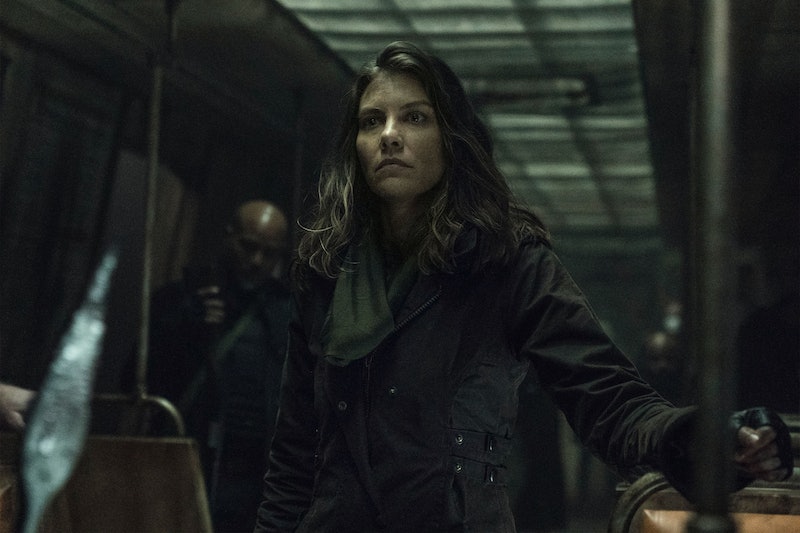 Spoilers ahead for The Walking Dead Season 11 premiere. When you’re on a supply run with the man who (very violently) killed your husband, things are bound to get tense. But even so, Negan’s betrayal of Maggie during The Walking Dead’s Season 11 premiere came as a surprise. Minutes after accusing Maggie of “playing dictator,” Negan pretty much left her for dead in a true cliffhanger moment, refusing to take her hand as she tried to escape a bunch of chomping walkers below.

On his journey from enemy to frenemy, Negan has more than proved his worth to the group, saving Judith, Dog, and ultimately everyone from the threat of the Whisperers. But he’s rightly suspicious that Maggie would still prefer him dead. “Her head isn’t even in the game, because I’m in her head living rent free,” he says when their conflict comes to a head.

“Killing you — it’s always on my mind,” Maggie responds, airing out her anger for the whole group. “I’m not gonna tell you that you’re wrong about me, because you aren’t.”

Maggie killing Negan has always been a possibility on the show; as Screen Rant reports, it was the original plan for the comics. But the possibility that a reformed Negan would kill Maggie (or in this case, let her die) hasn’t been raised until now.

Fans shouldn’t be too worried about her fate, though. Maggie doesn’t die in The Walking Dead comics, and is in fact one of very few core characters to survive the books’ entire run. Of course, the show has deviated from the comics more than a few times, so her survival isn’t guaranteed now or for the rest of the final season. But it isn’t the first time someone has tried to kill her only for her to live.

In the comics, Gregory tries to poison Maggie, and on the show, he tries to have her killed by luring her out to Glenn’s grave and planning a surprise attack. On both occasions, Gregory was threatened by Maggie’s leadership as his Hilltop successor — and similarly, on both occasions, he was killed for his treason.

Negan, on the other hand, doesn’t try to kill Maggie in the comics, but their relationship is just as strained. Much like in the show, Maggie decides death would be too nice for Negan (“You have to live with what you’ve done,” she tells him). But the TV version of Negan is much more involved with the group than his comics counterpart. Like Maggie, Negan survives the entire run in the comics, but lives alone and doesn’t interact with anyone else very much. Because Negan continues to be a major character in The Walking Dead TV series, it appears there is still plenty of room for drama between him and the survivors — especially if he did in fact just leave one of their own to die.