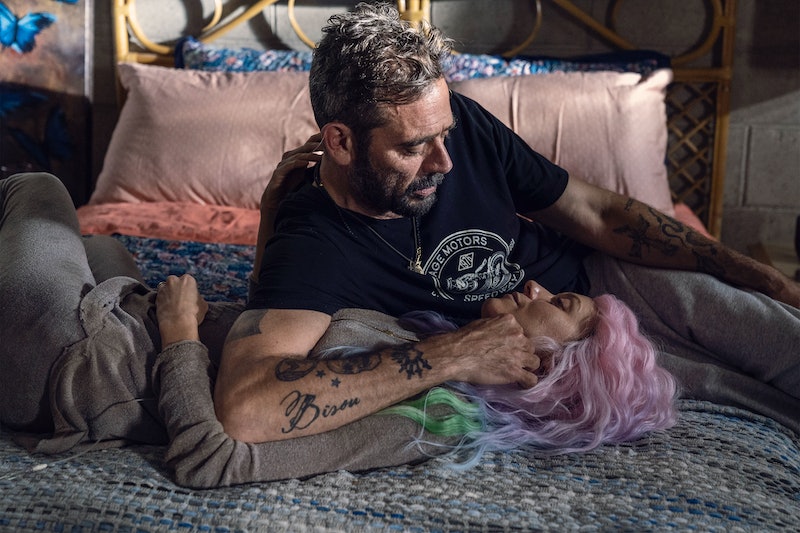 Spoilers ahead for The Walking Dead Season 10 finale and comics. “Here’s Negan,” indeed. In the Season 10 finale of The Walking Dead, the show delivered its most emotional standalone story yet — that of Negan and the two loves of his life, Lucille the bat and Lucille the woman, who died seven months into the apocalypse. Though Negan’s story has been told before in the comics, the on-screen adaptation paints the former villain in a much kinder light. Here’s what the series changed — and what it might mean for The Walking Dead’s final season, premiering this summer.

Before walkers, there was no bat — just Negan and Lucille, a married, quarrelsome couple. After losing his job as a gym teacher for assaulting a student’s father, Negan spends his time playing video games with kids online (in the comics, his preferred game is ping-pong, according to Digital Spy). He’s overall pretty terrible: when Lucille is diagnosed with cancer, she finds out at an appointment by herself because Negan couldn’t be bothered to drive her, and the same day she discovers that he’s been having an affair. In the show, Negan ends the affair as soon as Lucille learns that she’s sick. But in the comics, he complains to his mistress about his sick wife.

Negan and Lucille As Survivors

Another way the show softens Negan’s story? He cares for his sick wife by making runs for chemotherapy drugs, whereas in the comics, Lucille dies in the hospital right at the start of the apocalypse, leaving Negan to fend for himself and fall in with bad people. In the show, the time Negan and Lucille share together as survivors is actually sweet and humanizing. Where the apocalypse darkened others’ spirits, it seems to have given Negan purpose: keeping Lucille alive (and making up for being the absolute worst before). He doesn’t even like killing the walkers outside — a far cry from the murderous man we first met in Season 6.

In the show, the couple happily shares a dog food dinner, smokes weed, and watches DVDs in their little house. (Adding to their chemistry in these moments is the fact that Negan and Lucille are played by real-life husband and wife Jeffrey Dean Morgan and Hilarie Burton-Morgan.) In both the series and the comics, Negan is unable to “put down” Lucille when she becomes a walker — on screen, he simply burns their house down and heads off to enact his first vengeful, Negan-esque murder.

Negan wouldn’t be Negan without his iconic accoutrements: namely, his bat Lucille and famous leather jacket. The Season 10 finale reveals the backstory behind both. The jacket was a $600, pre-apocalypse purchase that his wife demanded he return. But he threw away the receipt, so she hid it in their floorboards until well after the outbreak.

In the comics, Lucille the bat is acquired from some men Negan meets on the road. But on the show, it comes from a surprising source: Laura, the eventual Savior, whom Negan first met at a medical supplies camp. She and her father were incredibly friendly, giving Negan the chemotherapy he needed to bring home to his wife and providing the bat for protection against a local gang. When Lucille eventually dies, he wraps the bat in barbed wire, delivering his first pre-murder speech before using it against the foes who tried to steal his medicine.

The flashback in the finale is framed by the current day, in which Negan is banished from the community — more for his own safety than anything else. As Carol says, Maggie is going to kill him if he sticks around. But ultimately, Negan decides he’s OK with risking that and un-banishes himself. Maggie (understandably) doesn’t look happy, setting up a possible conflict in Season 11.